Singing in the rain? Actually, you may be stomping in the sewage

Last year's heavy rains caused millions of gallons of sewage to overflow into streets across North Texas. And the biggest overflow was kept from the public, until now. 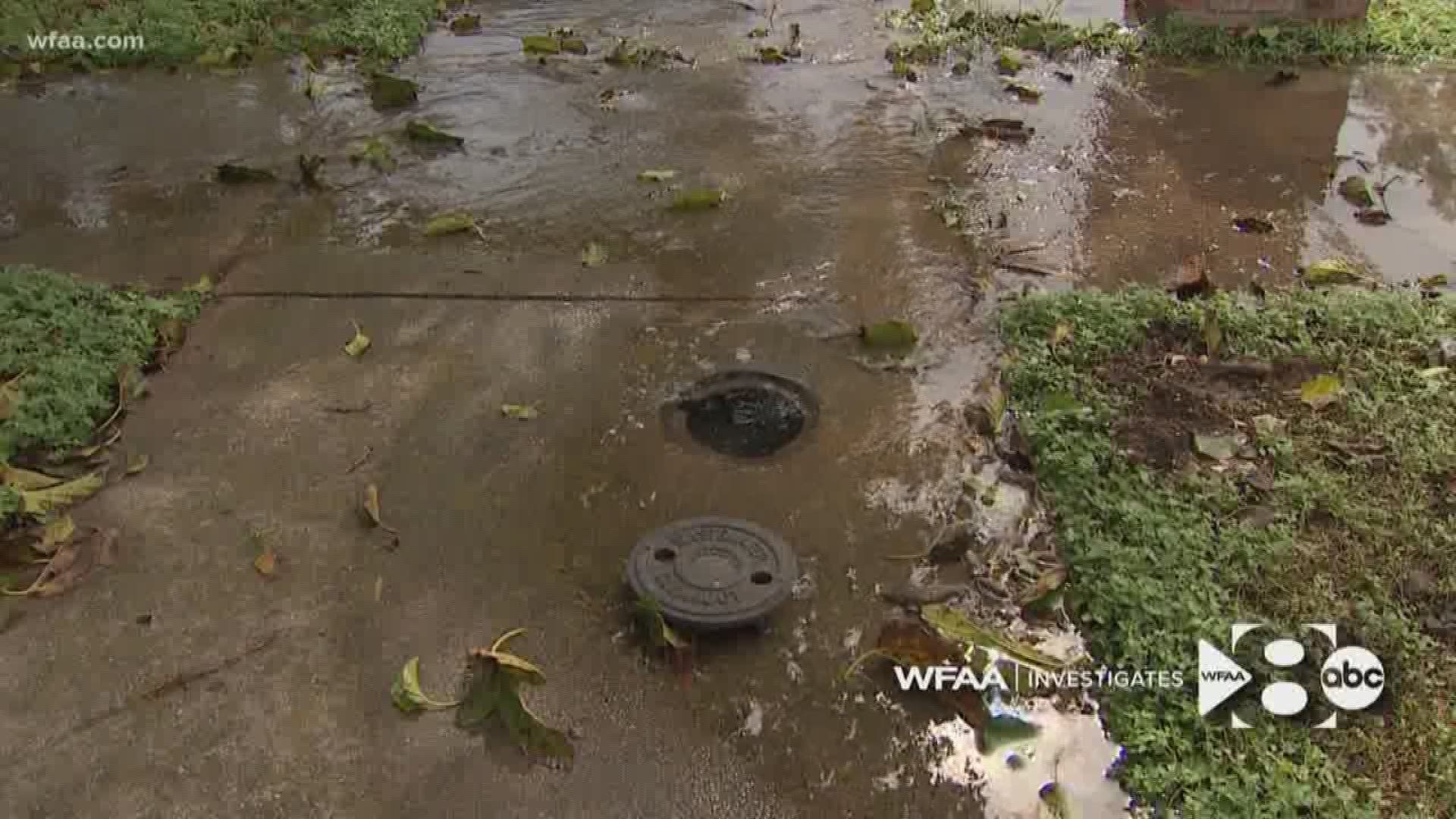 DALLAS — During heavy rains, some of that water you see flowing down the road isn’t just water. It’s actually overflow sewage.

And WFAA found a lot of it last year.

It happens more during heavy rainfall, and 2018 was a record year for Dallas-Fort Worth.

Why is this happening? And is it dangerous to public health?

We set out to answer that question.

State law requires cities and water systems to report any sewage overflows of more than 100,000 gallons. We analyzed data from overflows from across the state, and discovered some troubling trends.

We also discovered that the largest single overflow in the state last year happened right here in North Texas – and wasn’t reported to anyone.

RELATED: The anatomy of a sewage overflow: How all that nasty stuff ends up on your street

RELATED: 119 million gallons of sewage overflow in DFW, by the numbers 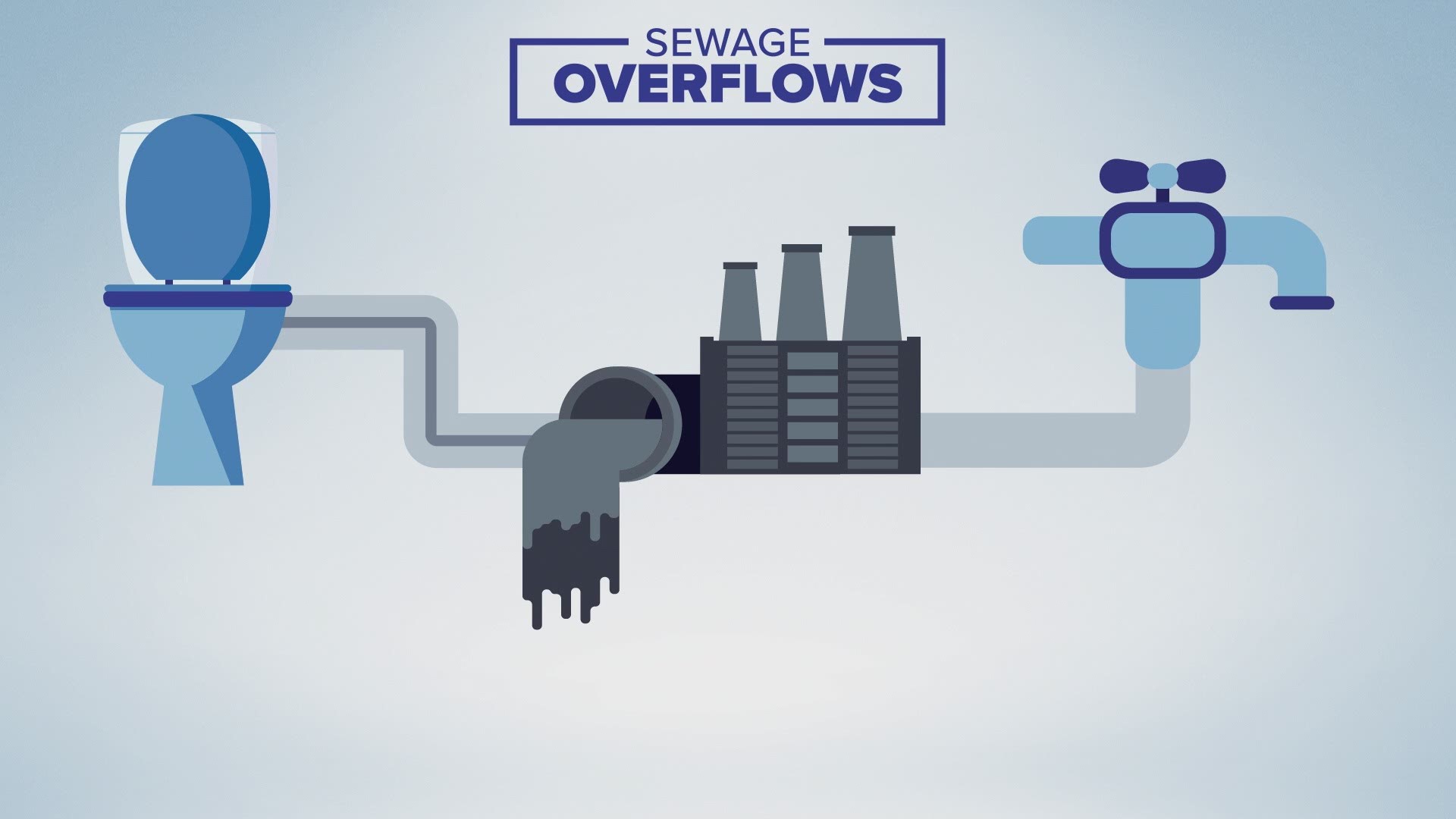 More on that later.

“It makes me want to stop smelling,” said Skyy Tyson.

She’s talking about the stench from her front yard when it rains.

“It makes me want to throw up sometimes.”

Her stepdad, too. “It looked like a sanitary waste field,” Darrell Foster said.

“We had defecation, urination, feminine products, tissue,” Foster said. “Everything that goes down the toilet was in our yards.”

We found overflows not only in their town, but also in Fort Worth, Plano, Cleburne, and dozens of other cities.

When you flush the toilet, the water is supposed to flow through underground sewer lines to a wastewater treatment plant, where all the nasty stuff is removed before eventually – after going through a water treatment plant – coming back out your faucet.

But if those underground sewer lines are not properly maintained, they develop cracks. Then, when we get heavy downpours, the water sinks into the ground, through the cracks, and floods the sewer line to its capacity.

And because the rainwater combined with sewage water has nowhere else to go, it spews out manholes, often creating a mess in the streets.

That’s five times more than the amount that overflowed in all of the rest of Texas last year.

So, what does 119 million gallons of sewage water look like?

“There’s certainly the potential for really, really harmful bacteria that can really affect human health to be expanding rapidly and change this ecosystem for a significant period of time,” he said. “So, I, personally, as an environmental scientist, take it very seriously.”

So does the federal Environmental Protection Agency.

The agency says that bacteria and viruses in these overflows “may cause diseases ranging in severity from mild gastroenteritis … to life-threatening ailments.”

State regulators have taken note. In 2004, the Texas Commission on Environmental Quality launched a new initiative to encourage cities to stop overflows “there is harm to human health and safety or the environment.”

Officials with city water systems are quick to claim that these overflows are not a threat to drinking water, because, they say, the overflow sewage is diluted with rainwater, and, it’s all treated before it comes out your faucet.

Environmental experts say the bigger concern is swimming in lakes downstream of these overflows.

Where does all that sewage go?

More often than not, it ends up in creeks, rivers and eventually lakes, including some that are drinking water sources.

We discovered that 14 million gallons of sewage water went into Lake Ray Hubbard last year; 10 million into the Trinity River; 4 million into White Rock Lake; and 1.3 million into Big Fossil Creek near Fort Worth.

Jerry Cosgrove is the director of Plano Public Works. “By the time it gets down there it’s very, very diluted. But still - it’s not something that should happen.”

Where is all that sewage coming from?  Almost every water system across North Texas. Some more than others.

The single biggest overflow in the state last year happened in Garland.

Bill Gase is Garland’s wastewater utilities director. He says this wasn’t your typical sanitary sewer overflow. He said the city released treated effluent water from their plant on purpose, if they hadn’t, he says, the plant would have flooded.

“And then we would have had raw water sewage leaving the sewer mains and potentially also backing up into businesses and houses,” Gase said.

Even though the state classified the event as a “sewage” overflow, Garland says that’s not accurate.

“We did not have any raw sewer water leave the plant,” Gase said. “It was treated water.”

The water left the plant through a discharge point into nearby Rowlett Creek. From there, it flowed into Lake Ray Hubbard, a drinking water source.

We can’t tell you what effect it had on the lake because Garland city officials failed to alert the city of Dallas, which is in charge of the lake. Dallas city officials say that if they had been told of the 14-million-gallon effluent discharge, they would have conducted tests.

“That was a failure on our part,” Gase said.

Garland also did not alert the public about the discharge, which resulted in a violation by the Texas Commission on Environmental Quality. No fine was assessed, but Gase said his team will make notifications as required about future overflows.

“We are the largest wholesale provider of wastewater treatment services in the state of Texas,” said Vanassa Joseph, Trinity River Authority spokeswoman.

That partially explains why they were the number one contributor in the state to the sewage overflow problem.

“Overflows are a problem for all wastewater utility providers and last year was a very wet year,” Joseph said.

That’s true. Last year was the second wettest year on record for DFW with 55.97 inches of rain.

Heavy rainfall in North Texas isn’t going away. So it will be up to the cities to keep their sewer lines maintained, experts say.

At a project site in Euless, the Trinity River Authority is working to cut down on sewage overflows. Crews are replacing a 40-year-old concrete pipe with PVC, which is less susceptible to cracks.

We also visited a Plano facility, where crews are also trying to stop overflows from happening. Workers there put cameras inside underground sewer lines to detect cracks.

“Fractures, breaks, cracks, broken pipe, infiltration, roots … those are the big ones we look for,” said Zac Inman, a contractor working with Plano on the inspections.

It’s part of a $900,000 project – money the city says is an investment to keep overflows to a minimum.