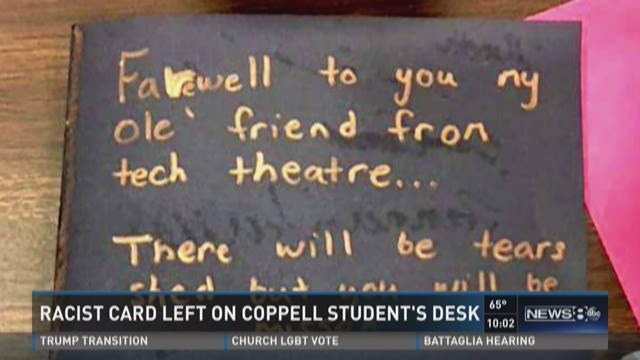 It's the last place you want to see the divide among people.

Surely the divisiveness during the presidential elections has crossed over in our learning environments. The latest case may be Coppell High School.

"I saw it, read it, and scrolled right past through it," said Montserrat Lomelli, a student at Coppell High School.

It started as pictures taken of a "Goodbye Card" inside a classroom. Those pictures were then posted to social media where it took off. Some parents and students tell News 8 the card was sent to a Hispanic student and hinted at deportation.

"I'm starting to feel this wasn't something to get at that kid personally...this really was a truly racist feeling," said Nicolas Reyes who has parents of Colombian descent.

With parent's permission, News 8 spoke with students who say the card was derogatory to hispanics. One line of the card read: "Ya'll were a blessing when it came to building the new arena"..."We are very sad our school will not be very clean anymore." The last page reads "Make America Great Again. Adios."

Coppell ISD says administrators are aware of the post and say it appears to be real. A spokesperson for the district says it will take disciplinary action because it violates the student code of conduct. The district wouldn't say much more on the subject.

"Everyone should be acknowledging that there is an issue. We need to talk about this and open up about it," said Reyes.

Students like Nicolas are hoping for action. Especially after he says some people have characterized this goodbye card as a joke. Parents told News 8 that an email was sent to parents and children vaguely mentioning the matter.
An email sent to parents read:

"We have enjoyed a successful Fall semester so far this school year. This week, however, we have encountered incidents on campus which have caused us concern. These incidents are related to inappropriate and insensitive posts on social media. CHS administration will continue to address situations in which these types of behaviors are exhibited. Additionally, teachers will continue to monitor and supervise classroom interactions to promote an effective school environment in which attention is focused on academics. In cases where violations to the Student Code of Conduct are substantiated, discipline consequences will be administered. We work hard to foster a safe, inclusive learning environment in which all students act in a responsible and respectful manner. Please do your part to keep our campus a great place to come to daily and learn by maintaining appropriate behavior."

"It's disgusting and it's distasteful," said Hector Flores who is with LULAC, the League of United Latin American Citizens. Flores says the group is asking for a meeting with the district over the matter.

The group is hoping that meeting happens Tuesday. It is one incident that possibly details the divide and it is happening one too many times through-out the country.