The high-tech production run by the USC Shoah Foundation Dimensions in Testimony program, will result in Glauben appearing as a hologram – a three-dimensional image - on permanent display at the Dallas Holocaust and Human Rights Museum, currently under construction downtown and scheduled to open in September 2019. 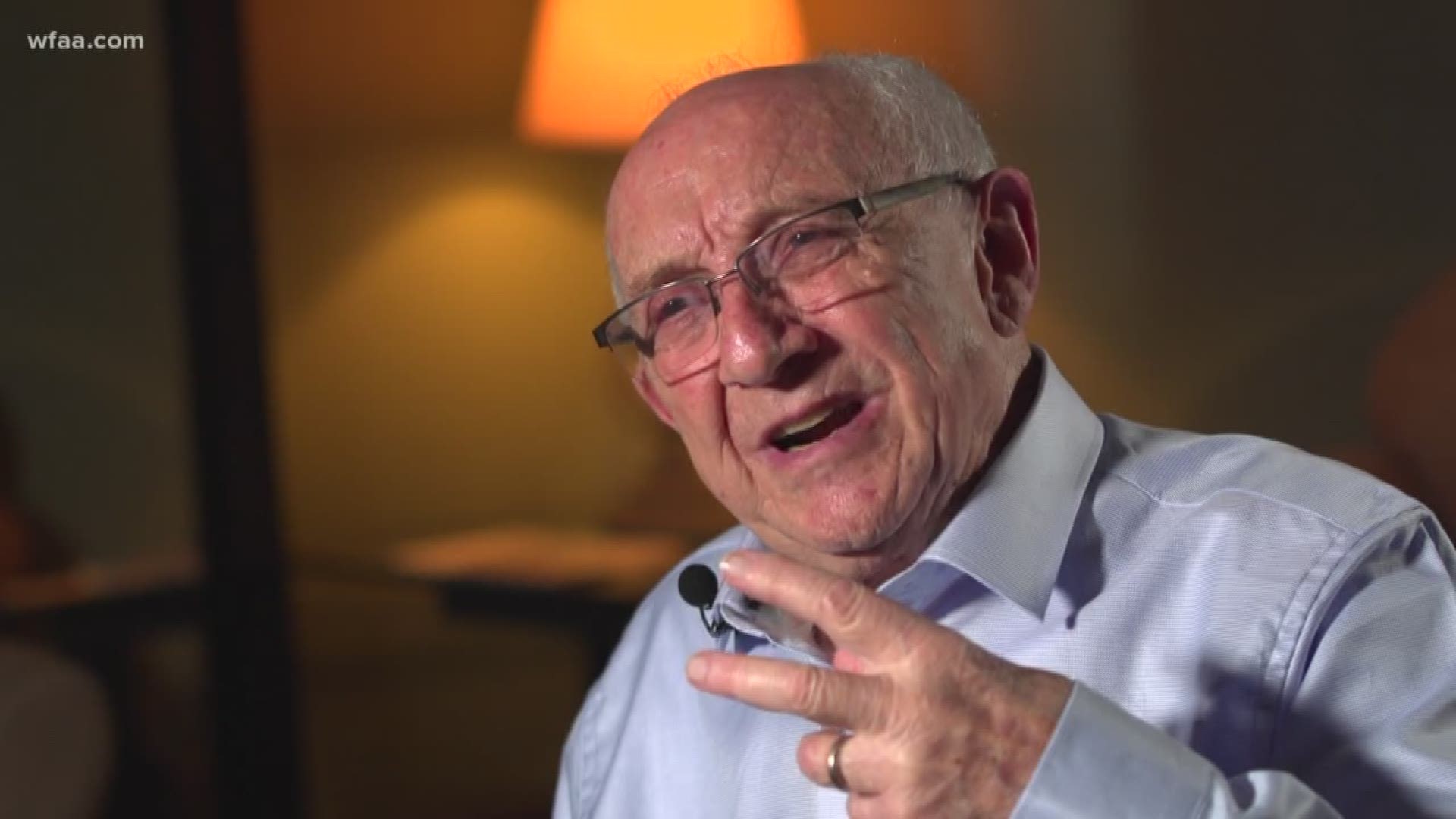 DALLAS -- Max Glauben is the first Holocaust survivor in Texas and one of only 19 across the world to be filmed as a hologram, a lifelike, three-dimensional image that will allow visitors to Dallas’ new Holocaust museum to speak with him even after his death.

“Max, were you scared?” a video producer asked. “I don’t know of anybody who doesn’t have the natural reaction of being scared,” Max Glauben answered. “If you ask me if I ever panicked, I would tell you no. But scared? Yes.”

Glauben is 90 years old. As he retold an 80-year-old story, his memories were as fresh as they were frightening. Surrounded by cameras in front of a 360-degree green screen, Glauben described living and almost dying during the Holocaust.

The high-tech production run by the USC Shoah Foundation Dimensions in Testimony program, will result in Glauben appearing as a hologram – a three-dimensional image - on permanent display at the Dallas Holocaust and Human Rights Museum, currently under construction downtown and scheduled to open in September 2019.

“We think it’s incredibly important to learn from our past, to ensure this history is never forgotten, so it won’t be repeated,” said museum president and CEO Mary Pat Higgins. “We will lose that opportunity as our survivors are aging.”

Glauben told video producers a multitude of stories, including how he learned to successfully sneak out of the Warsaw Ghetto, where he was born. He would go out and trade his family’s possessions for food, which he smuggled back in by riding on wagons hauling coal.

Over the course of five days, Glauben will be recorded answering more than 1,500 questions about his life – from hiding from the Nazis in the ghetto to being sent to five Polish concentration camps, where he was orphaned at the age of 13.

Glauben was traded into slave labor and worked in various underground factories, but when work ran out, he was sent on a death march. He was on that death march when American troops liberated him. He immigrated to the U.S. when he was 19. He was alone. “I’m giving my knowledge, so it will educate people, possibly all over the world,” Glauben said, explaining why he was taking part in the filming. “Some will become witnesses, and they will know what kind of tragedy the Holocaust was.”

Speech recognition technology will be used to code all of Glauben’s answers, so that when museum visitors ask him a question, he is able to provide an accurate and realistic answer.

“The voice of the Holocaust survivor, the role they play in Holocaust education and the lessons they can teach us, it’s just – it really can’t be put into words how important that is,” said Kia Hays, who manages the dimensional technology program for the USC Shoah Foundation.

The Foundation was created after the making of Schindler’s List to collect and preserve audio and visual life histories of survivors of genocide.

Glauben travels the world sharing his history. While he is candid, he is also careful. “We, as the deliverers of our testimony of what happened to us, have to disengage from the actual happenings and tell and express our feelings of how it happened, regardless of loss and regardless of sorrow,” he said. “We also need to deliver our testimony in a way that does not create hate -- the same hate that was applied towards us.”

He said hate is frightening because it continues to multiply inside a person. “The more he hates, the more he wants to hate,” Glauben said.

Higgins said the holographic image of Glauben will make museum visitors feel like they are sitting in the same room with him, which will allow them to learn “intimate parts of his history.”

“Six million people died in the Holocaust,” she said. “It’s sometimes easy to get lost in that but learning an intimate part of someone’s history is a reminder of how it affected families and how it impacted lives.”