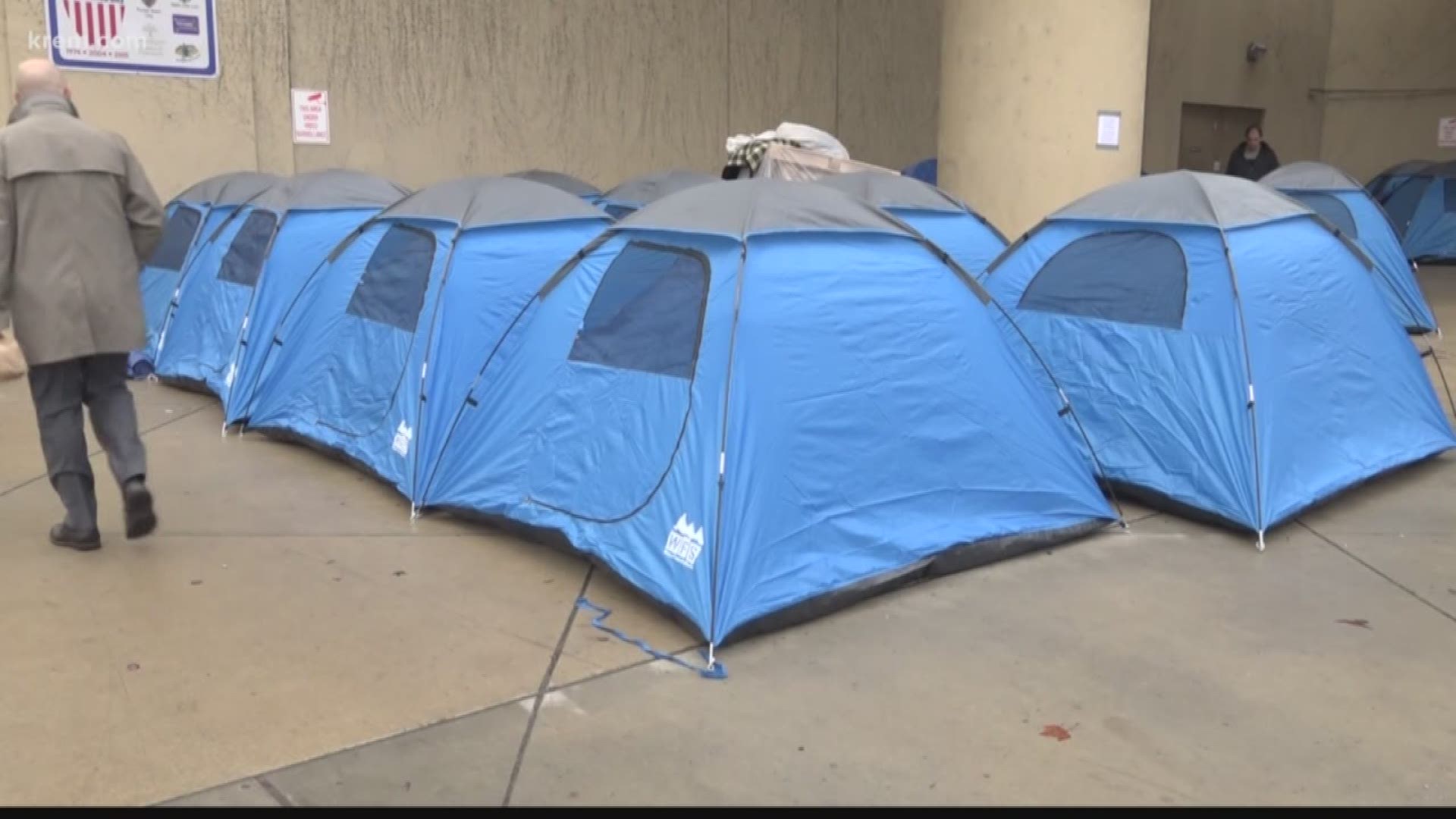 SPOKANE, Wash. — Members of the Spokane City Council have proposed a resolution to use emergency funds to create additional emergency shelters and warming shelters as the city moves closer to cold weather.

The resolution was presented to the public on Wednesday morning during a press conference at Spokane City Hall.

The resolution will support "the use of contingency reserves to support the prompt purchase or lease of more safe and accessible 24/7 low-barrier emergency shelters and warming centers."

"The City Council is ready to fund, essentially  whatever it takes to get the job done," City Councilmember and Council President candidate Breean Beggs said. "And that's been for over a year. Last August, we were here with almost the same thing, with a similar resolution saying we need 24/7 shelter beds, we don't want to kick people out at seven in the morning and create refugee camps around warming shelters."

Low-barrier shelters mean that everyone in need can use the space and no one can be refused service based on discrimination. The resolution also said the shelters and centers would provide laundry facilities, storage for belongings and showers.

Along with protecting people from the cold fall and winter weather, the resolution also states that the emergency shelters and warming centers would reduce the spread of infectious diseases like Hepatitis A among the homeless population.

Beggs, who spoke first at the conference, said that downtown "belongs to everyone" and that a solution has to be reached before the winter.

"Its just a problem and everyone wants to do better," Beggs said.

Stuckart said the discussion should be about opening warming sites instead of leases. He also said that three of the four warming shelters - Ermina Center, Salem Lutheran Church and Westminster United Church - aren't reopening this year. According to Stuckart, the Cannon Center is in negotiations to open.

"This is not only a City of Spokane issue, this is an issue across the country," Condon said.

He also said that Beggs was wrong in saying the council was surprised that the City of Spokane was looking at a single location for a warming shelter, as it was not in the best interest of those involved and it had been discussed.

Condon also said that Stuckart's claim that the city doesn't have a warming plan in place is "totally untrue" and that Stuckart voted on a regional plan to help the homeless. He also said Stuckart canceled a meeting to discuss the location of warming centers, which he said is a difficult process.

Condon also said that it could be true that three of four shelters aren't reopening, but that it would be better to ask the service providers about specific shelters.

The mayor also people should go to already open services, such as House of Charity, to keep warm in the winter, but said in response to another question that he was not confident there would be enough shelter capacity by this weekend as temperatures are projected to fall.

The plan outlines four steps for helping those experiencing homeless during the winter months.

Secondly, Condon's plan states the city will decide on a location for a new shelter for this fall, which the plan said the city is close to completing.

Third, the plans calls for the city to "augment the shelter location with emergency warming center locations." Condon said staff members are projecting that 150 people will be served by two more warming shelters and that an operator will be named soon.

The last point in the plan calls for continued collaboration with providers of services to "fill identified gaps" for the homeless population.

"We have faced a number of challenges along the way and have had to revise our approach to get to an outcome that meets the most urgent needs right now," Condon is quoted as saying in the release. "Our staff's flexibility and creativity ultimately will allow us to achieve that goal."

RELATED: Explainer: What's going on with the new homeless shelter on East Sprague?

RELATED: Formerly homeless man inspires at Spokane gym: 'I can come here and better myself'

The following video is an explainer on the status of the proposed shelter on East Sprague Ave.