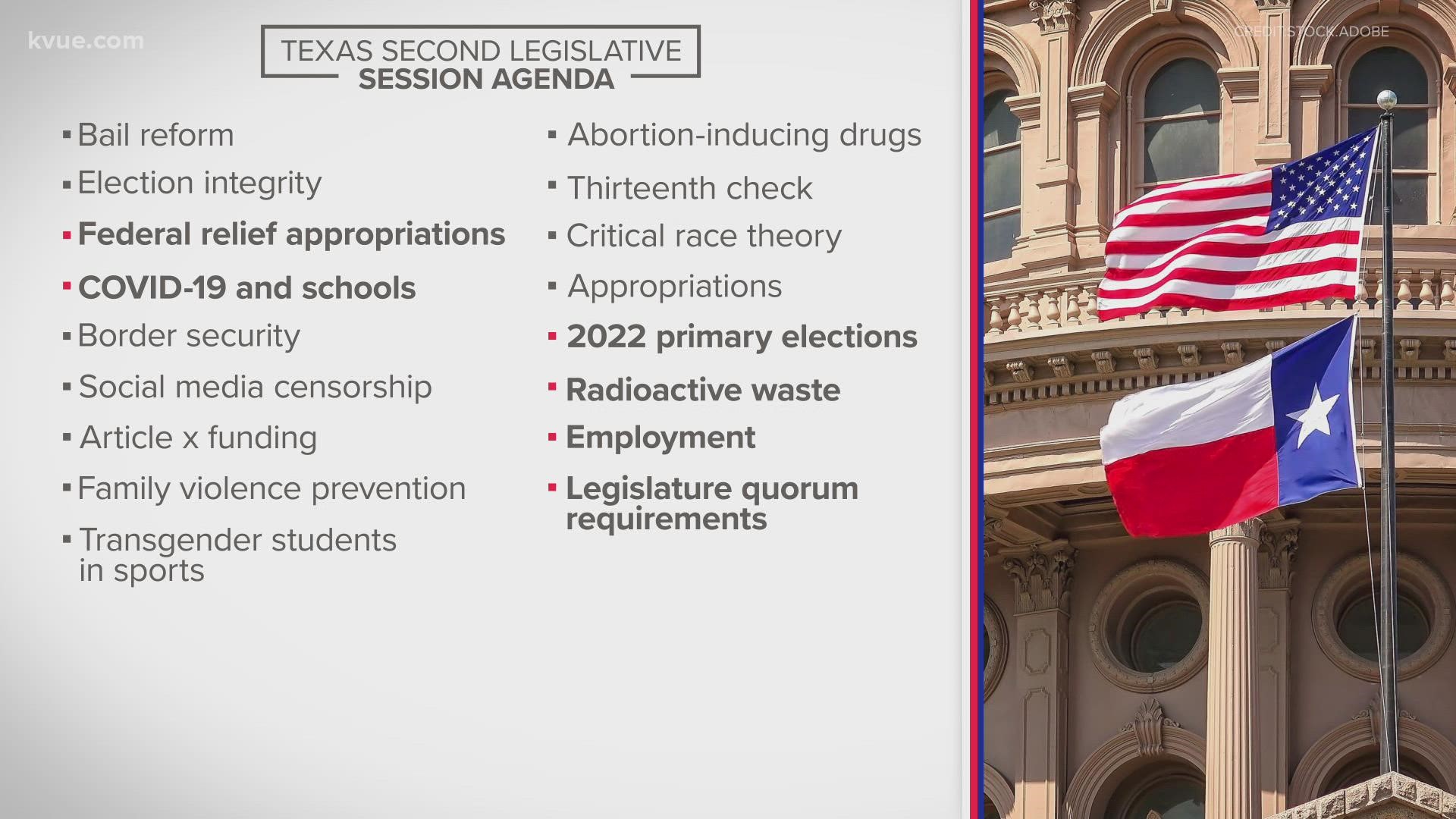 AUSTIN, Texas — Gov. Greg Abbott has announced the date and agenda for the second special session of the 87th Texas Legislature.

"The Texas Legislature achieved a great deal during the 87th Legislative Session, and they have a responsibility to finish the work that was started," Abbott said. "I will continue to call special session after special session to reform our broken bail system, uphold election integrity, and pass other important items that Texans demand and deserve. Passing these Special Session agenda items will chart a course towards a stronger and brighter future for the Lone Star State."

The agenda for the second special session includes these 17 items, as stated verbatim in a release from the governor's office:

The final item listed on the agenda, "legislation related to legislative quorum requirements," is particularly notable given the events of the first special session. The majority of Texas House Democrats left Austin for Washington, D.C., on July 12 to break quorum during the special session due to a controversial election reform bill.

Dozens of Democrats remain in the nation's capital as of Thursday, Aug. 5.

"We'll keep all tools in the toolbox available to us. If he [Abbott] continues to push voter suppression, then we'll have to consider that as we debate what our next action will be," Rep. John Bucy (D-Cedar Park) said. "What we care about is protecting voting rights. It is foundational. That's why we chose to break quorum over it. We've lost a lot of fights as Democrats in the Texas Legislature, and we fight hard on the floor and we fight passionately."

House Republicans consider the delay caused by the Democrats' departure from the state an inconvenience and hope their colleagues return to work.

"We want them to come and do the job they were elected to do, and some of their colleagues have. And we're hoping that more of them will do so. And that's just the reason we're elected, is to serve the people," said Rep. Jim Murphy (R-Houston), chairman of the Texas House Republican Caucus. "It's unfortunate the Democratic walkout, flyout, on private planes for their vacation has caused this. But that shouldn't take away from the importance of the work we do. This is critically important work."

“I want to thank Gov. Abbott for calling the legislature back for a second special session. The work we will complete is critical to Texans. All of the bills on this special session call were passed by the Texas Senate during the regular legislative session this spring, but did not pass the House.

“During the first special session in July, the Texas Senate maintained a quorum and quickly passed every bill listed on Gov. Abbott’s call. Unfortunately, a quorum was not maintained in the Texas House of Representatives and all of the bills died.

“With Gov. Abbott promptly calling us back for another special session, I want Texans to know the Texas Senate stands ready to begin our important work, immediately. We will have a quorum, and we will begin committee hearings this weekend. Bills will be heard on the Senate floor beginning next week. I look forward to a productive special session for the people of Texas.”

Austin ISD: What to expect when school starts