What impact does Ruth Bader Ginsburg's death have for the Supreme Court?

KVUE spoke with Brian Smith, a politics professor at St. Edward's University, about Justice Ginsburg's death and the implications of her vacant seat. 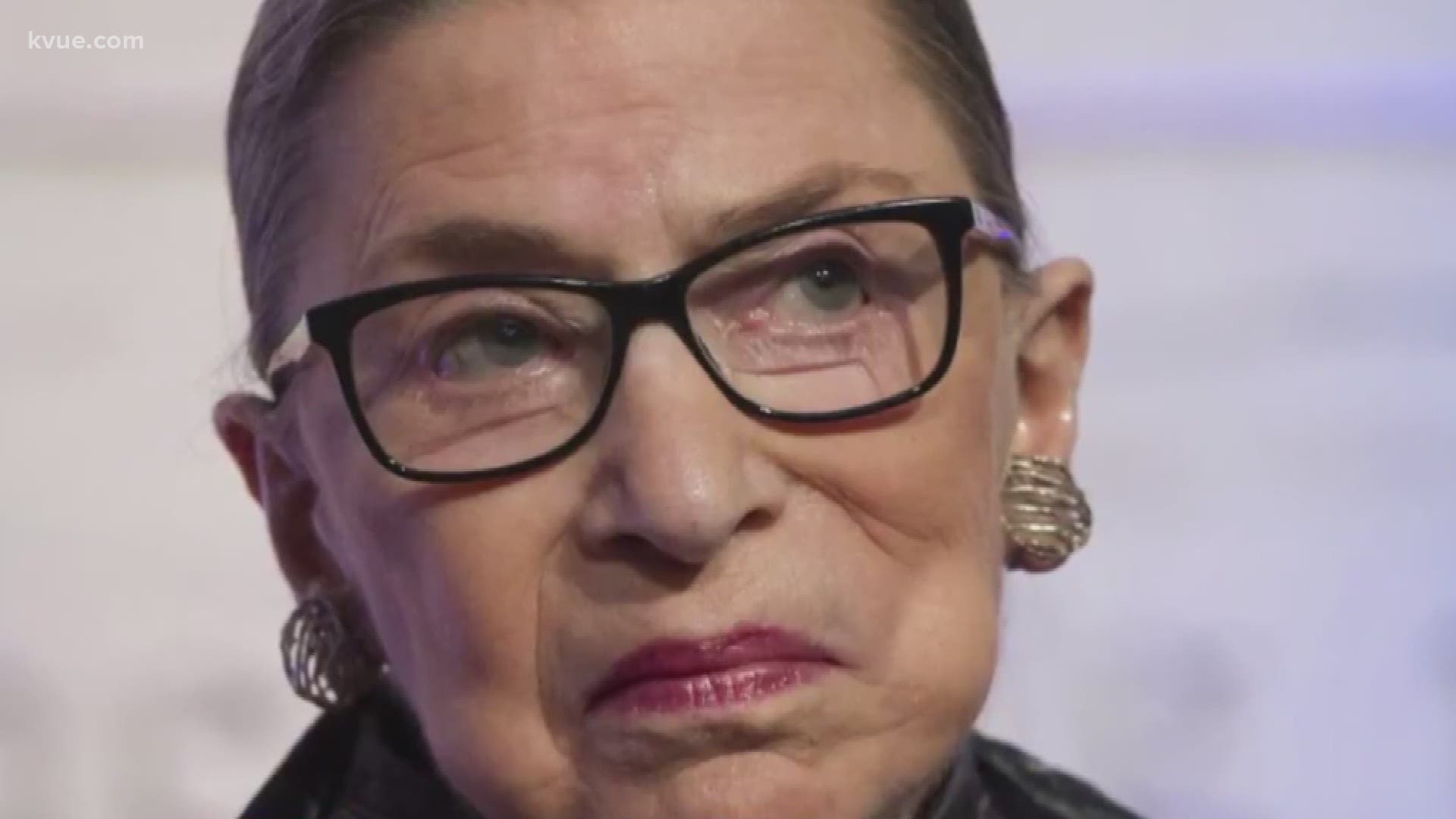 Justice Ruth Bader Ginsburg has died of metastatic pancreatic cancer at age 87, according to the U.S. Supreme Court.

Her death comes just over six weeks before Election Day is likely to set off a heated battle over whether President Donald Trump should nominate, and the Republican-led Senate should confirm, her replacement, or if the seat should remain vacant until the outcome of his race against Democrat Joe Biden is known.

KVUE's Mike Marut spoke with Brian Smith, a politics professor at St. Edward's University in Austin, about Justice Ginsburg's death and the implications of her vacant seat on the Supreme Court.

Marut: "So I just want to talk about really the impacts of Justice Ginsburg's death because I know back in 2016 with Merrick Garland, Justice Merrick Garland, the Republicans basically said to President Obama at the time, you can't make a decision because we have an election coming up. Should we see something similar here?"

Smith: "OK. The big difference between 2016 and 2020, of course, is in 2016, President Obama, if he had a Democratic Senate, would have moved through with that nomination. He didn't. So, what we're seeing now is Donald Trump, a Republican – Senate ... Republican. So I think they're going to make a move. It's just a matter of when. Are they going to do it before Election Day and then see if they can use that as momentum on Election Day? Or are they going to wait until after Election Day if Trump loses and give it the one last parting shot of the Trump presidency?"

Marut: "So what does Justice Ginsburg's death mean in general for the Supreme Court and for this decision-making process?"

Smith: "It means they're down a justice, which means the likelihood of a four-four tie is greater. But what it also means is the balance of the court right now has moved to the right because she's one of the most staunch liberals on the court – very, very straight liberal voter. And now losing that, the liberals have lost one of their members, and there's more Republican appointees on the court than Democrats. So for a short period of time, the court has moved to the right. If Trump is unable to get a nominee and Joe Biden is elected, the balance will be restored. But if Trump does get a nominee, we'll go from like a five-four Republican court to a six-three Republican court."

Marut: "How much of a difference does that make when it comes to these big decisions that the Supreme Court has to take on to go from five-four to six-three with political leanings?"

Smith: "It's hugely important because when you have a six-three advantage, that means one judge can turn to the other side and you still win. We've seen Justice Roberts vote with the Democrats several times on key issues. Now, you can afford to lose that vote if Donald Trump appoints somebody who he probably would, who is a very, very strong conservative."

Marut: "And just a few weeks ago, President Trump came out with additional names for a list of candidates. Do you anticipate him, you know, coming out ... maybe not tonight, but tomorrow or over the weekend or even Monday. 'Hey we're revisiting this list and we're going to move forward.'"

Smith: "I think that he will. I mean, I think, you know, he had the list there and again, when you make a list like that, that's to motivate the Republican base. Now, he has an additional reason to motivate that base. We didn't think the election could get even more interesting. It just has. What else is going to happen now? Joe Biden is going to have to come out and produce a similar list because there's going to be a lot of pressure to say, OK, Joe, there is a vacancy. Who are you going to fill it with? And then these people are going to become proxies for our vote. So, who is going to be replacing Ruth Bader Ginsburg? And for the Democrats, if they win? Nothing changes. But for the Republicans, if they get another judge, it really does tip that judicial balance to the Republican side."

Marut: "Is this something that Joe Biden has probably been preparing for anyway?"

Smith: "He had been preparing for it. You know, you're always preparing for a vacancy. And Ruth Bader Ginsburg was likely to be, given her health and her age, probably going to be the judge that stepped down. So for Biden, he probably said, 'OK, if Ruth Bader Ginsburg steps off the bench, I will replace with somebody like her. So he's been preparing for this, but I don't think Donald Trump was preparing to have this opportunity fall into his lap. And there, of course, is the political upside is he gets a nominee. The political downside is if it's the wrong choice or it angers independent voters, he could get the nominee and lose the election. So it's all going to be about who he decides upon. What Mitch McConnell does and, of course, the timing of it all."

Marut: "Now, we've also heard with Mitch McConnell that he hasn't brought senators back yet to Washington, D.C., you know, especially when it comes to trying to resolve the pandemic issues and everything like that. Is this something that could spur the senators to come back as early as they can?"

Smith: "I think if the Republicans are serious about moving on this issue, then they have to get the Senate convened sooner rather than later. And so I think Mitch McConnell is going to call it back into session. The problem, though, is if I'm a Republican senator and I'm in a reelection bid, this is now a campaign issue that I didn't see coming. So somebody like our John Cornyn, he's going to now have to say, OK, John, this is your issue. It's not Hegar's issue. You're the senator. So how are you going to vote? And then people are going to make up their minds based upon that. So if I'm running for the Senate this year, this is something I wasn't expecting. And it adds a whole different dynamic to whatever race in the state I'm from."

Marut: "And with John Cornyn and MJ Hegar going head-to-head this year, you know. How does that play into that race?"

Smith: "Again, senators are the ones that confirm judges. So that's a power that's exclusive to them. And so voters are going to look now and say we are going to vote upon these issues. This is now a new issue. And for John Cornyn, this is a very important issue because, in 2016, people are going to remember ... you were in the Senate then. You didn't confirm a judge. You're in the Senate now, you are confirming a judge. So that might sway voters' minds. But it also might say the Republican base, if it's somebody they like, 'OK, we weren't sure about voting for you, but now we're absolutely sure that we are because of your decision on this.' So a lot can happen. But the biggest thing is the uncertainty. So that's the whole mix of this, that a month or so before the election ... this is a whole new thing. And it's going to really, I think, influence all the way up to Election Day. And then maybe even all the way up to the weeks after Election Day, if the Republicans lose big and decide they just want to get one last chance."

Mike: "And I was going to say, how quickly can this even happen? I mean, even if senators went back to Washington, D.C., tomorrow, Monday, it's still not like a short process."

Smith: "You know what? The process is much, much shorter since they stopped filibustering judges. Once upon a time, this would have never have happened. Meaning before we changed the Senate, changed the rules that said, you could filibuster judges and now you can't, the Democrats could have easily filibustered this and there would have been no progress. But now we're looking at a 50-vote nomination to pass. So the judge gets 50 votes plus the vice president, or 51 votes. They get a majority. That judge is going to be confirmed. You can now move it much quicker through the Senate Judiciary Committee because the Republicans are in charge. It will take time, but because Donald Trump has a list, these people are immediately on that list, are getting vetted by all sources. So this is going to move a lot faster than we think. And if Trump wants to get it done before Election Day, there's plenty of time to do that."

Marut: "And going back to President Trump, having three opportunities to pick a Supreme Court justice, that's not very common."

Smith: "Again, for a president to have three nominees in their first term is very, very uncommon. Jimmy Carter served one full term and had zero nominees. So we think about it for Donald Trump, this is a way for Trump to have a legacy long beyond his presidency and very likely long beyond his life. When you appoint somebody to the court, that is your legacy. And presidents now tend to appoint political allies and young people because, you know, your views will get represented for a long time and that person will be there for a very long time. So for Trump ... three appointees in four years, almost unheard of. Usually, people who served two terms are going to get that number, but three in one term is very rare."

TikTok ban has stars on edge, including this Austinite