When asked point-blank if he would commit to abolishing the police bureau, Wheeler said he did not support that. 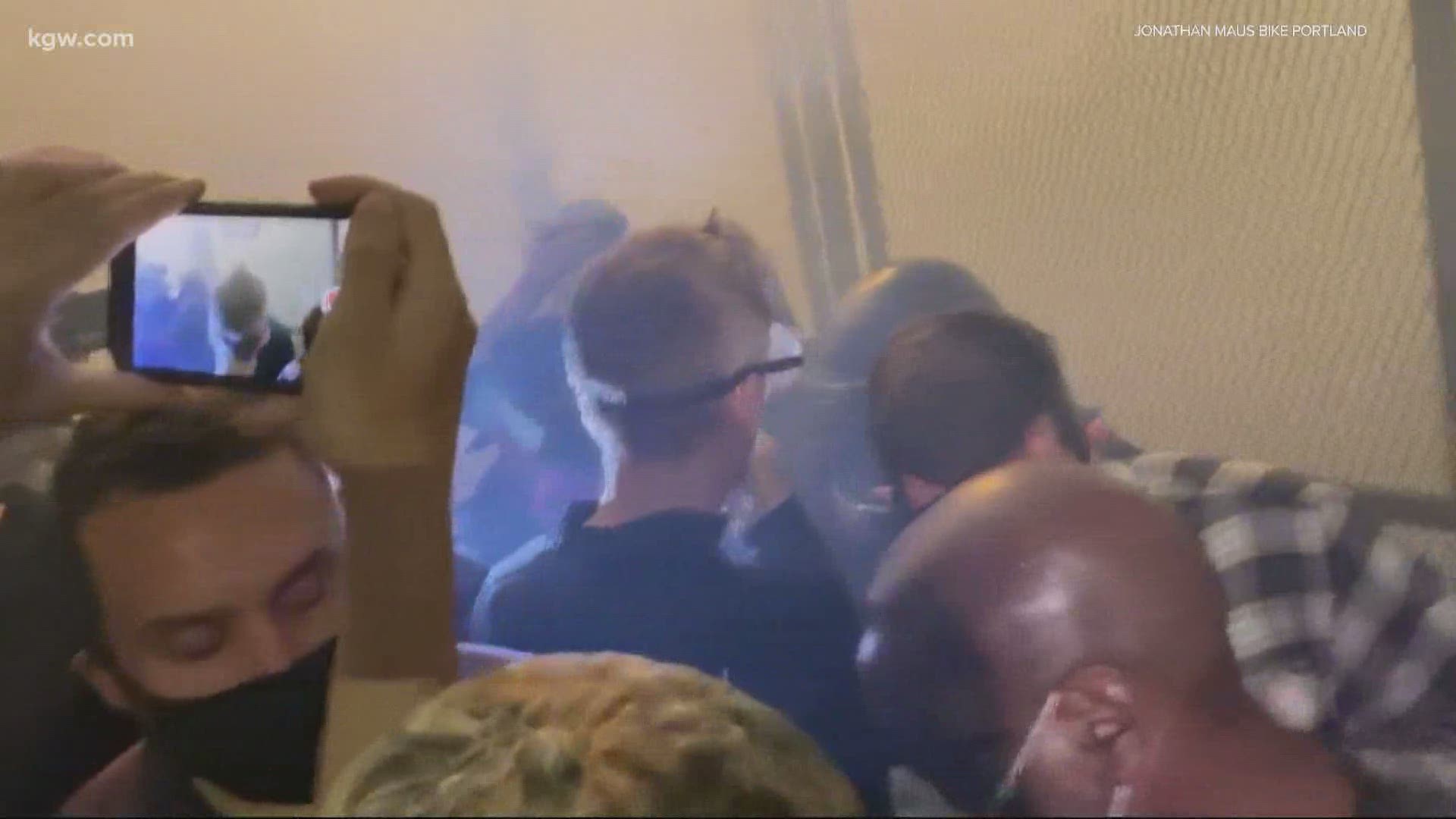 PORTLAND, Ore. — Mayor Ted Wheeler attended a protest in downtown Portland Wednesday night to answer protesters' questions and hear their concerns. He was still in the crowd around 11:30 p.m. when federal officers used tear gas and other munitions to disperse the thousands of protesters outside the Multnomah County Justice Center.

Video from New York Times reporter Mike Baker shows Wheeler at the fence around the Justice Center as flash bangs and tear gas were being deployed by federal officers.

"I'm not gonna lie, it stings, it's hard to breathe, and I can tell you with 100% honesty I saw nothing that provoked this response. It's nasty stuff, I'm not afraid but I am pissed off," Wheeler told Baker. "This is an egregious overreaction on the part of the federal officers. There was nothing that I saw anybody do that warranted this reaction. As you can see, all it's done is piss everybody off. It's made everybody angry. They've come in and they kicked the hornet's nest. This is not a de-escalation strategy. This is flat out urban warfare and it's being brought on the people of this country by the president of the United States and it's got to stop now. This is a threat to our democracy."

Wheeler came to the demonstration to address protesters before getting caught up in the late-night chaos. He first arrived at Southwest 3rd Avenue and Morrison Street, near the Justice Center, a little after 9 p.m. The crowd shouted "F*** Ted Wheeler" and "Do your job" when he showed up.

Wheeler thanked protesters for showing up and resisting the presence of federal officers sent by President Donald Trump. He was nearly drowned out by noise and chanting from the crowd. He said if Portlanders don’t stand up to federal officers, Trump will continue to send them to other cities across the country.

After some brief remarks, Wheeler handed over the microphone to protesters and allowed them to ask questions and address him.

When asked point-blank if he would commit to abolishing the police bureau, Wheeler said he did not support that.

Wheeler was also asked if he would hand over the role of police commissioner to Commissioner Jo Ann Hardesty, a longtime police reform advocate who has criticized Wheeler and Portland police for their response to protests over the last eight weeks, which have often ended with tear gas clashes. Wheeler said he has a good working relationship with Hardesty but has no plans right now to relinquish his police commissioner responsibilities. He said in January, when there is a new Portland City Council in place, "all of the bureaus will be up for discussion."

RELATED: Mayor Wheeler says he will continue to be Portland police commissioner

One protester asked, "Is there anything within our local government and state government to be able to stop these types of (federal) officers?"

"I think what we're doing tonight is actually the best thing we can do right now," Wheeler said. "Is be here, be heard, be unified, and be clear. We didn't want them, we didn't ask for them, they're not trained for what they're being asked to do. And we want them to leave."

Around 9:50 p.m., protesters called on the mayor to move from the corner of Southwest 3rd Avenue and Morrison Street and head to the Justice Center steps so that he could be better seen and heard by the thousands of people.

Mayor Wheeler took to the mic again from the steps of the Justice Center and demanded that the federal government stop occupying Portland.

Wheeler continued, "[Federal officers] are not properly trained to be here. We demand that they leave," which was met more favorably.

A projection on the side of the Justice Center had four demands from protesters to Wheeler.

Protesters’ demands projected on side of Justice Center as @tedwheeler speaks with demonstrators pic.twitter.com/DXAduiXI5x

Wheeler left the steps of the Justice Center around 10:15 p.m. but continued to answer protesters' questions as he went through the crowd.

The mayor stayed downtown until around midnight.

Protesters stayed hours later. They lit fires and threw hundreds of items like Molotov cocktails at the federal courthouse, according to Portland police.

Portland police declared a riot at 12:30 a.m. and told everyone to leave. Most people remained downtown. The police bureau said its officers did not make any arrests.

Wheeler’s visit came on the heels of an editorial published Sunday in the Portland Tribune asking the mayor to do just this. The editorial, “Portland’s leaders – it is time – it is well past time – to lead,” called on Wheeler and other civic leaders to step up and break the cycle of nightly violence and clashes.

The authors implored Wheeler, Police Chief Chuck Lovell and police union leader Daryl Turner to get into the streets and listen.

“You need to talk to that group. You need to listen a lot. To shut up a lot. To let that crowd speak its truth. Then, and only then, will you be able to take the reins of this fightback from the motley few, the pernicious advocates of mischief, who see Portland's nightly riots as a heck of a good time,” the editorial said.

Lovell and Turner did not make an appearance at the demonstration.

President Trump in a Thursday morning tweet acknowledged Wheeler's visit to the protest.

Wheeler last attended a protest on June 5, about a week after widespread protests started in Portland following the death of George Floyd. At the time, he promised the crowd he would limit the Portland Police Bureau’s use of tear gas, a move he later made official.

Other elected leaders have more recently visited the Justice Center during protests. City Commissioner Hardesty led a vigil there on Friday night, and Multnomah County Commissioner Sharon Meieran said she was hit with tear-gas on Saturday while standing on the periphery of a crowd gathered outside the federal courthouse.