A majority of the House voted Wednesday to impeach President Donald Trump for a second time. 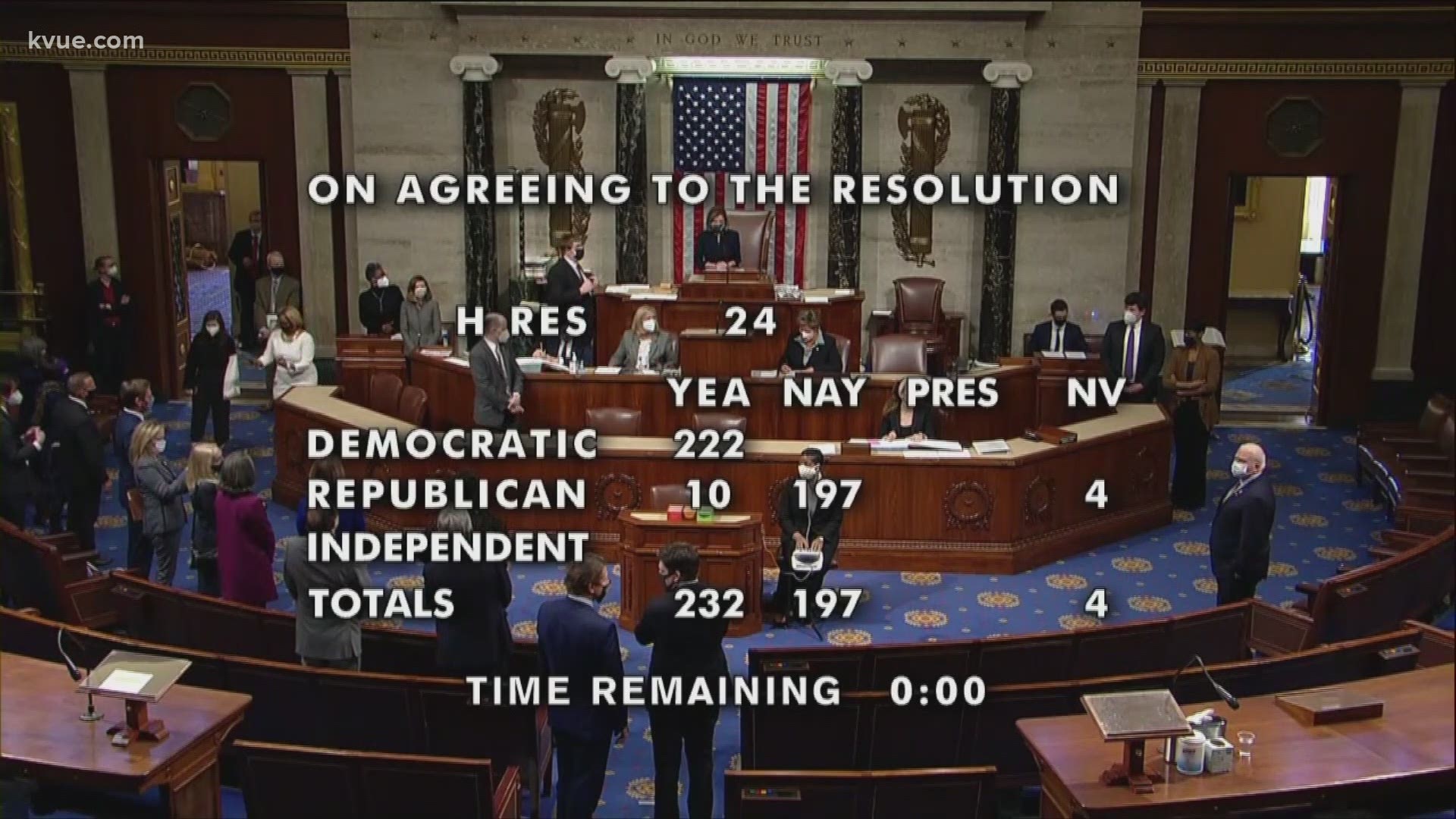 AUSTIN, Texas — The U.S. House of Representatives has recorded enough votes to impeach President Donald Trump for a second time, this time in connection to a speech made before a mob of his supporters stormed the U.S. Capitol last week. The impeachment process now moves to the U.S. Senate.

Even as representatives continued to cast their votes on an article of impeachment for "incitement of an insurrection," reactions started to come in from Texas lawmakers and political groups.

Republican U.S. Rep. Michael McCaul (TX-10) sent out a statement saying that while he condemns the president's rhetoric and behavior and that there "may very well have been impeachable offenses committed leading up to, and on, that tragic day," he looks at this impeachment vote as "attempting to indict a case before it's been presented to a grand jury" and that it would set a bad precedent.

"I can tell you from first-hand experience, rushed justice is not the solution to mob violence," McCaul said in part. "For that reason, I will, with a heavy heart, oppose impeachment at this time. I did not come to this decision lightly. And I truly fear there may be more facts that come to light in the future that will put me on the wrong side of this debate."

My full statement on impeachment: pic.twitter.com/dORsBNQxU3

Republican U.S. Rep. Roger Williams (TX-25) also voted against the impeachment of the president. Williams called the attack on the Capitol "an act of domestic terrorism" but said that a rushed vote on impeachment will "only further divide the American people."

"As our nation begins a tough healing process in the days ahead, Speaker Pelosi and House Democrats must reject the impulse to politicize the heinous tragedy that occurred last week and refocus our efforts on delivering results for the American people," Williams said in part. "There will be a peaceful transfer of power on January 20, 2021 – we must move forward for the good of the Republic."

The reaction from Republican U.S. Rep. John Carter (TX-31) was similar. Carter called the attack a "horrific stain on our nation's history" and an act of domestic terrorism but said the vote will not help repair the wounds of the nation and the "rushed nature" of this impeachment ignores procedures followed in every other impeachment trial to date.

"President Trump has only seven days left in his tenure as President of the United States, and in a nation that is obviously deeply divided, angry, and volatile, this legislative act will not help us repair these rifts. Impeaching President Trump at this juncture will only further deepen the divisions and derail any efforts to unite the country as President-elect Biden takes office," Carter said in part.

In a joint statement with two other representatives, Republican representatives Dan Crenshaw (TX-2) and Chip Roy (TX-21) took a similar stance as well, saying in part that the vote is "just another symptom of an oligarchic Congress that won't give us the requisite time to deliberate and hear from constituents" and calling the article itself flawed, "charging crimes that are lacking the requisite element of intent."

We can’t ignore the President’s behavior leading up to the violence in the Capitol last week. He bears enormous responsibility for it. But impeachment is not the answer. We all need to deescalate, lower the temperature, and move forward together as a country.

RELATED: VERIFY: Impeachment does not undo a president's pardons

Democratic U.S. Rep. Lloyd Doggett (TX-35) spoke out in favor of the vote throughout the day on Twitter, including sharing the speech he gave Wednesday morning:

By impeaching him today, we not only demand accountability for President Trump’s gross misconduct but—more importantly—we declare to the next Trump-like, aspiring tyrant: Not in America. We love our democracy too much. My speech just now: pic.twitter.com/lL7xzRPO4N

Later in the day, Doggett called out the "empty words" from Republicans calling for unity over division and said that Congress "wouldn't have to impeach him [Trump] a second time if Republicans had done their job the first time by joining us to impeach this unhinged, dangerous President."

The progressive organization Progress Texas also sided with the House's decision, with Executive Director Ed Espinoza saying that, "The president's actions inciting the attack on our nation's Capitol will be in history books, and so should the consequences of his actions."

"Trump will go down in history as a twice-impeached president who brought shame to the nation by stoking the flames of white supremacy and attempting to subvert democracy. Congress must send a message that the United States does not tolerate domestic terrorism, especially when members of our own government are responsible for it, and the Senate must vote to convict and remove Trump from office," Espinoza said.

Texas Democratic Party Chair Gilberto Hinojosa said the bipartisan vote was an example of justice being served and that "never in our history has a more egregious crime been committed by a sitting President."

Hinojosa said it is now up to the U.S. Senate – including Texas senators John Cornyn and Ted Cruz – to push aside partisanship and "put the rule of law above all else" by conduction the impeachment trial expeditiously and removing the president from office immediately.

Less than 25% of vaccine doses in Texas have gone to seniors, state data shows