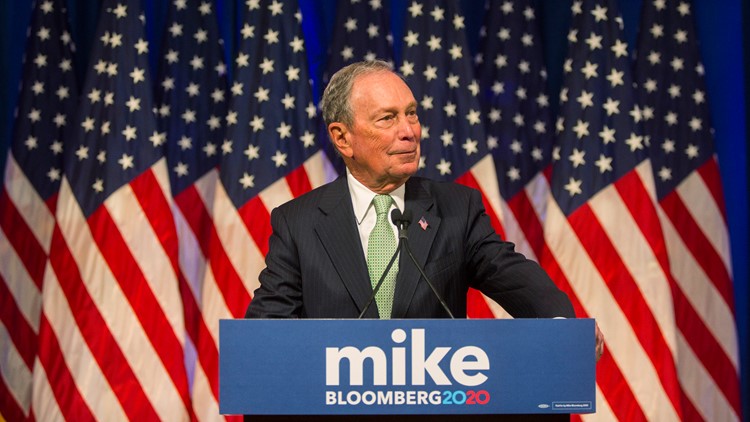 Photo by: AP Photo/Bill Tiernan
Democratic Presidential candidate, Michael Bloomberg during remarks to the media at the Hilton Hotel on his first campaign stop in Norfolk, Va. Monday, Nov. 25, 2019.

Unemployment is low, but economy isn’t working for everyone, Bloomberg says ahead of Texas visit

“Although the unemployment rate is down to 3.5%, the real economic picture is far more complicated,” Bloomberg said on a conference call with reporters yesterday. “I know that our economy is working fine for people like me and people like Donald Trump. But it is vastly broken for the majority of Americans.

Bloomberg’s plan is called the “All-In Economy.” He said there are seven million unfilled jobs in the U.S. economy because people lack the correct skills to get them.

Bloomberg’s plan would also increase the minimum wage to $15-an-hour and index it to inflation along with giving give so-called “gig workers” the right to organize and bargain collectively.

Even in the cities that are thriving, his campaign said, there are still segments of the community that have been shortchanged and unable to access the economic growth and prosperity that has been benefitting states like Texas.

“Of course, low unemployment is better than high unemployment, but Bloomberg’s observation is correct.  While folks at the high end of the economy have been doing well, folks in the lower income/education brackets are struggling. Moreover, the challenge in the United States is that if we cannot provide a trained workforce for the “gig” economy, those jobs may very well be filled overseas,” said Dr. James Riddlesperger, political science professor, at Texas Christian University in Fort Worth.

The trade war has cost Americans millions of dollars and Americans are underprepared for jobs of the future, Bloomberg said.

“[President Trump] is counting on the economy to lift him to victory and he’s hoping to face a career politician who’s never created any jobs,” Bloomberg told reporters.

Bloomberg, an entrepreneur and three-term mayor of New York City, said 470,000 jobs were created in New York on his watch. His company, Bloomberg, LP, currently employs 20,000.

But how would the Democratic presidential candidate pay for his “All-In Economy?” The exact costs are still being sorted out, his campaign said, and specifics would be laid out in the coming weeks.

Bloomberg’s campaign would not yet say whether the additional tariffs imposed by President Trump should be lifted if elected or if Bloomberg would roll back the Trump tax cut.

On Saturday, the Democratic presidential candidate brings his campaign and economic proposals to Texas where the unemployment rate is 3.4-percent. He will campaign in Dallas, Austin and San Antonio.

RELATED: Bloomberg started airing campaign ads in Texas before he announced he was running

Still, his advisors point to economic data showing weakness in this state.

In Dallas, for example, one in five children live in poverty. In San Antonio, 1,300 workers lost their job in trade, transportation, and utilities between Oct 2018 and Oct 2019, according to the U.S. Bureau of Labor Statistics. And in Austin, housing costs consumes a third of income for many residents.

Still, Bloomberg is coming into Texas as a relatively unknown candidate despite having launched an advertising blitz in recent weeks.

“Bloomberg is an unknown quantity among Texas Democrats (and Texans in general). While he has spent a huge amount of money announcing his candidacy, so far there has been little movement in his support. With the primary in less than three months, he has a monumental task to become seen as a serious contender, and of course that is why he is visiting Texas.  Unlike most candidates, he doesn’t see Texas as a bank, but rather sees it as a key state in getting delegates to the national convention,” Dr. Riddlesperger added.

“When I was mayor after 9/11 the questions everyone asked us – can you rebuild lower Manhattan. I said yes but that’s not enough. We set out to rebuild every area of the city,” he said.

As mayor, his campaign said Bloomberg helped create more than 470,000 new jobs, a 13-percent increase from when he took office. The gains came despite two major recessions and the aftermath of the 9/11 terror attacks, advisors added.