The Texas legislature reconvenes Tuesday. What to expect over next 140 days, why 2 North Texas representatives will skip opening day

Lawmakers will consider limiting governor’s control during extended emergencies like the pandemic, an idea born from last year's backlash. 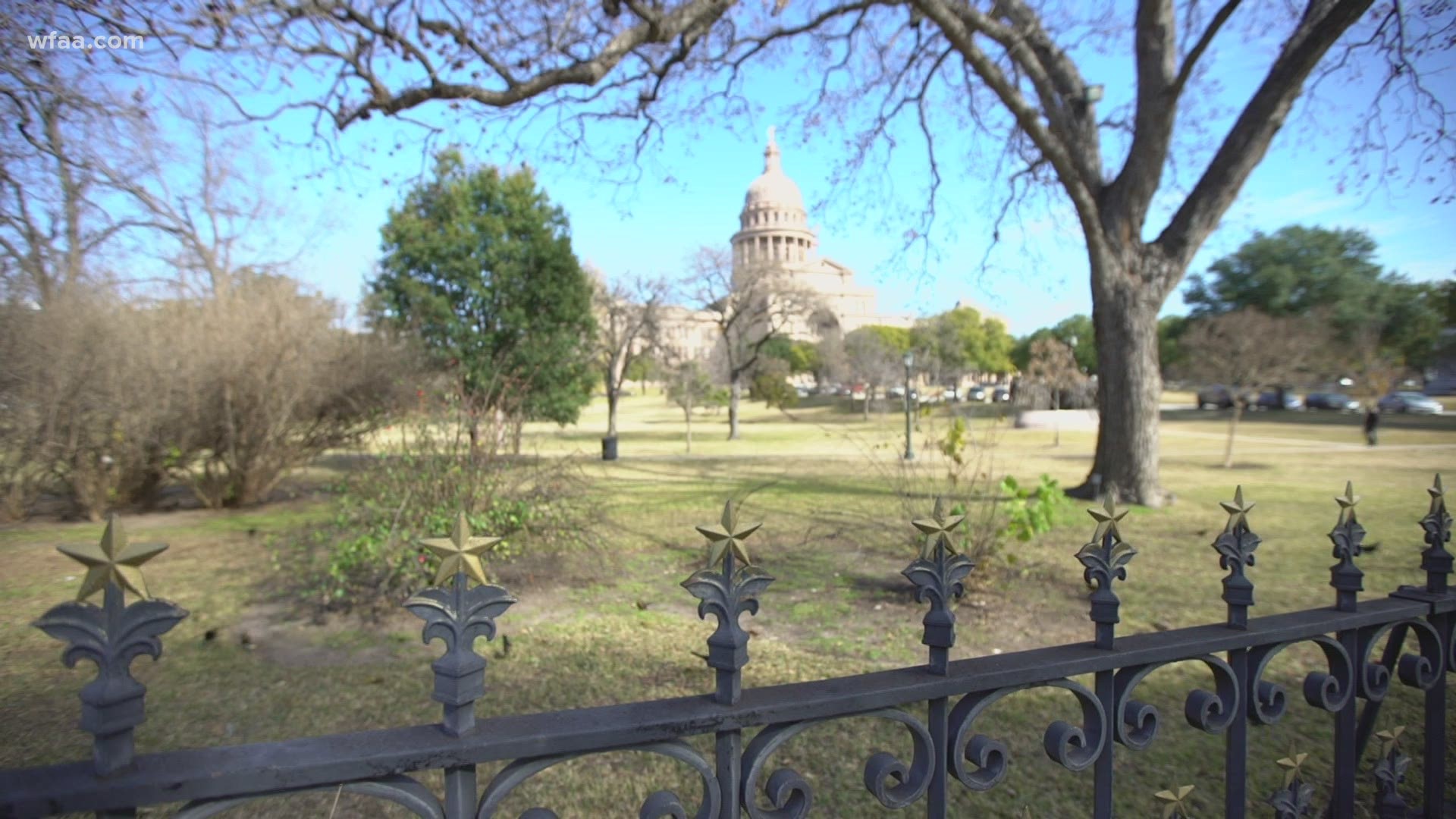 DALLAS — When the Texas legislature gavels back into session Tuesday at noon, the coronavirus will have changed the feel of the capital and is likely to dominate a lot of what lawmakers discuss.

After months of complaints about COVID-19 restrictions, state Sen. Drew Springer, R-District 130, has filed legislation to limit control of the governor during extended emergencies like the pandemic.

Springer’s idea, born from backlash by fellow Republicans during last year’s shutdowns, would require a special legislative session after a certain period of time so state lawmakers could debate and vote on who gets impacted in an emergency.

Springer said it is similar to oversight that cities and counties provide local leaders.

“The mayor or the county judge has seven days and then they have to get a committee involved. I look at that as getting five to seven other legislators involved after seven days. But then after 14 days, 28, or 21 – that’s what we’ll all discuss – I think a special session has to be called,” Springer explained.

State lawmakers will go to work on Tuesday with about a billion dollars less to work with.

State Comptroller Glenn Hegar released his Biennial Revenue Estimate today showing lawmakers are forecast to have $112.5 billion in revenue available to build a state budget for the next two years.

That’s about a billion dollars less than the previous budget.

“The forecast, however, remains clouded with uncertainty,” Hegar explained. “The ultimate path of the pandemic and the behavior of consumers and businesses during a resurgence are difficult to gauge. It’s also unclear how they’ll respond once the pandemic is fully under control. As a result, there is a wide range of possible outcomes for state revenue through the end of fiscal 2023, with the possibility of revenue falling short of this forecast but also a chance revenue could exceed it, perhaps substantially.”

Still, with that revenue forecast, Lt. Gov. Dan Patrick said he intends to maintain funding increases in public education that were established last session, as well as teacher pay raises. Patrick released a list of priorities that included a continuation of keeping state troopers on the international border.

"The Comptroller’s Biennial Revenue Estimate today is welcome news considering the economic challenges our state has faced,” said Lt. Gov. Patrick in a statement. “We believe that with a continuing healthy economy, a growing Economic Stabilization Fund and federal COVID-19 relief, we will be able to move forward on our budget priorities this session and balance the budget by session's end, as required by the Constitution.”

Legalizing marijuana and allowing casinos would create additional new revenue but neither idea has widespread support among Democrats or Republicans.

State Sen. Nathan Johnson, a Dallas Democrat, said Texas should finally join other GOP states and finally expand Medicaid. Such a move would give health insurance to a million Texans who can’t afford it now and the federal government would pay for most all of it.

“The reason I think it’s quite possible – maybe even probable – that we pass it this session is that we’re in a budget crisis and we need money,” said Sen. Johnson. “And when someone comes up and says we have an extra $2.5 billion for you next biennium and your district could save its hospital and provide better healthcare to a lot of people, that’s going to get a lot of people’s attention.”

The other headline to come out of the legislature on Tuesday is the House of Representatives electing a new Speaker. It is likely to be Dade Phelan, a Republican from Beaumont, who said he has enough support to win the vote in that chamber.

"I believe it is irresponsible to have all the members and guests in the House Chamber for an extended period of time, especially as no new allowances have been made to address the fact that the more contagious variant of COVID-19 has been found in Texas,” Beckley said in a statement. “We members are supposed to only be seated three feet apart, and we are currently aware that some colleagues and staff have received recent positive COVID-19 tests.”

Lt. Gov. Patrick said state senators and their staff have agreed to be tested for COVID-19 when entering the capitol. All journalists will also have to undergo a rapid test for the virus, his office said.

In addition, Patrick said, senators have agreed to a shorter “opening day ceremony to reduce the time spent in a large gathering. The Senate is reducing all ceremonial events and gatherings this session to focus solely on their constitutional legislative duties.”

Health protocols for the first 60 days of the legislative session will be voted on by the senators during the first week of the session.