“We’re going to have to open the Capitol back up. But as a former federal prosecutor... it all has to be threat-based," said U.S. Rep. Michael McCaul, R-Texas. 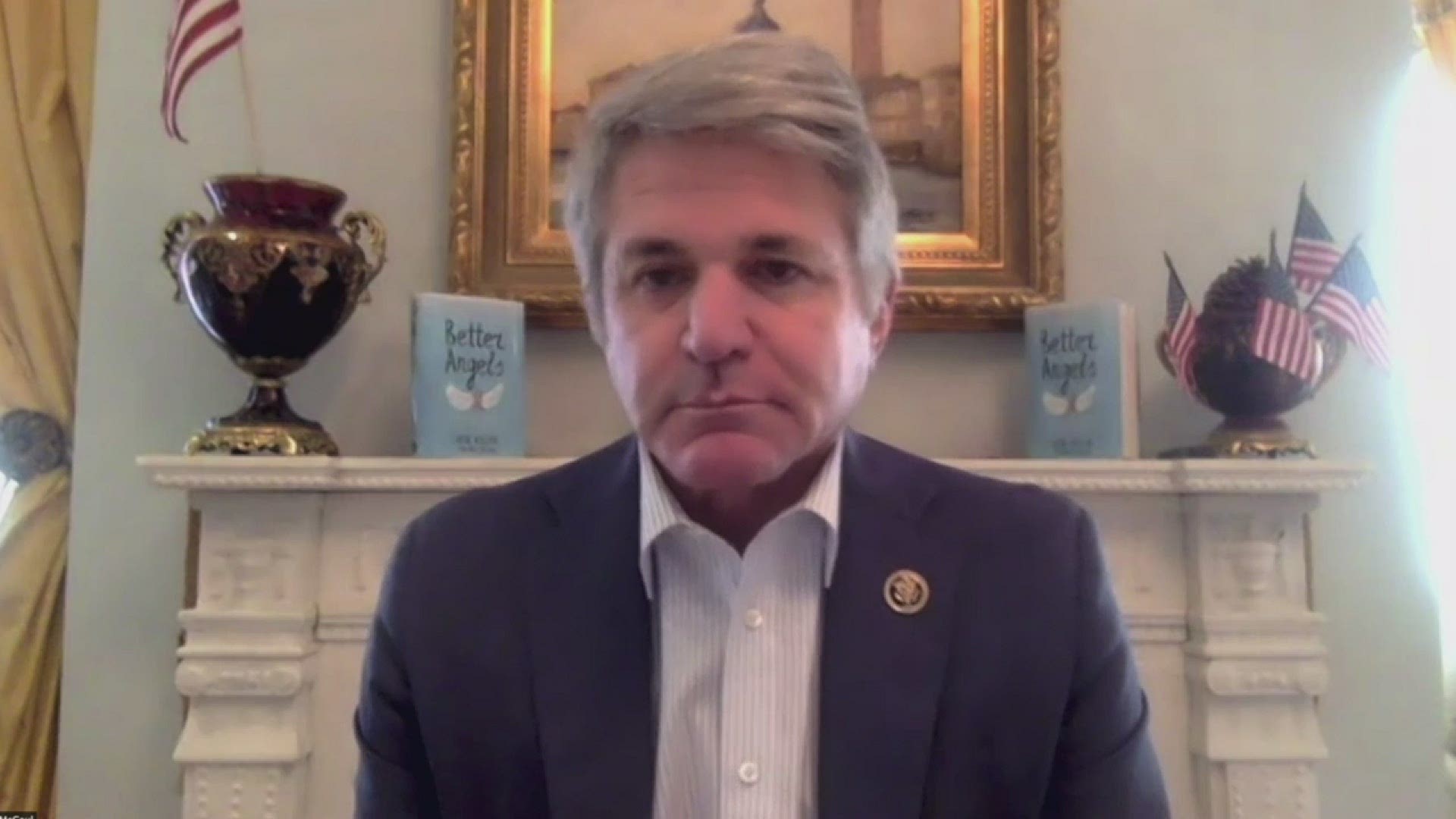 DALLAS — Days after the U.S. House of Representatives closed because of a threat of violence from QAnon conspiracy theorists, Congressman Michael McCaul, a Texas Republican, said the U.S. Capitol now faces a second threat of violence during President Biden’s first State of the Union address.

“There’s another threat coming up for the joint session of Congress when the president will be speaking in March,” McCaul said on Sunday’s Inside Texas Politics.

The president’s address to a joint session of Congress has yet to be scheduled. But the administration has reportedly indicated that President Biden will make the address after the final passage of the latest COVID stimulus bill, which might happen in the next week or so.

McCaul, the Republican leader in the House Foreign Affairs Committee, represents the 10th congressional district, a wide swath of central Texas stretching between Austin and Houston.

But how and when to relax the security posture is still being debated in Washington, D.C.

In addition, many are asking whether extremists win if their threats force lawmakers to suspend their work.

“I think at some point we’re going to have to open the Capitol back up. But as a former federal prosecutor, one that did counterterrorism, it all has to be threat-based. I had to take that threat seriously after what happened on Jan. 6, but I did feel a lot safer because we did have razor wire and the National Guard,” McCaul explained.

The congressman has called on former President Donald Trump to tell his supporters to stand down.

Credit: AP
The Capitol is seen through security fencing, Thursday, March 4, 2021, on Capitol Hill in Washington. Capitol Police say they have uncovered intelligence of a "possible plot" by a militia group to breach the U.S. Capitol on Thursday, nearly two months after a mob of supporters of then-President Donald Trump stormed the iconic building to try to stop Congress from certifying now-President Joe Biden's victory. (AP Photo/Jacquelyn Martin)

In the television interview, McCaul also defended his decision to vote against the latest COVID-19 stimulus bill. It passed the House in a party-line vote and will come back to the House now that the Senate made changes and passed it, as well.

With the Texas unemployment rate at 7.2% – higher than the national average – McCaul was asked why he opposed financial assistance that Texans need right now.

“Well, because only about 9% actually dealt with the vaccine and delivery of the vaccine and was COVID related. There was so much other stuff in there that had absolutely nothing to do with it and you're talking about almost $2 trillion now,” McCaul said on the television program.

“We're getting about the size of the GDP in terms of our national debt, so I think we had a responsibility. It's really unfortunate. We passed [previous] bipartisan packages. I was very disappointed that Speaker Pelosi and [Senate Majority Leader] Schumer decided to just sort of go it alone… and not make this a bipartisan effort.”

McCaul does not sit on the committee involved but said there are things the federal government can do.

“At the federal level, we need to look at the ERCOT grid itself and look at creative ways – how can we winterize it? But also, in a time of emergency, could we somehow tap into another power grid if necessary,” McCaul said.

State lawmakers are considering a number of similar options. At issue though is whether taxpayers should pay to winterize power plants and pipelines since that infrastructure is privately owned.

“I think both. I think the private sector – it's going to have to be part of doing business really. We have to have minimal standards when it comes to winterization, which threw everything off. It wasn't just wind and solar, natural gas was probably 70% of the ERCOT grid and those well heads get frozen,” said McCaul.

The Texan imprisoned in Russia

The central Texas congressman has also joined a growing effort to free a Texan from a Russian prison.

Trevor Reed, from Granbury, Texas, is serving a nine-year prison sentence in Russia for allegedly assaulting two police officers. He was in the country visiting his girlfriend.

Last summer, the Reed family said that they think Trevor is being held as a bargaining chip.

Since assuming office, the Biden administration has called for Reed’s release.

Now, McCaul is joining the effort.

“He was basically taken hostage and thrown in front of a kangaroo court,” McCaul said.

“The judge actually laughed at the charges and now [Reed] is incarcerated in a Russian prison through no fault of his own. They're using him as a political pawn, a bargaining chip. We don't like to give in to those kinds of demands. But I've tried to raise the profile and glad the [Biden] administration is working hard to get him released.”