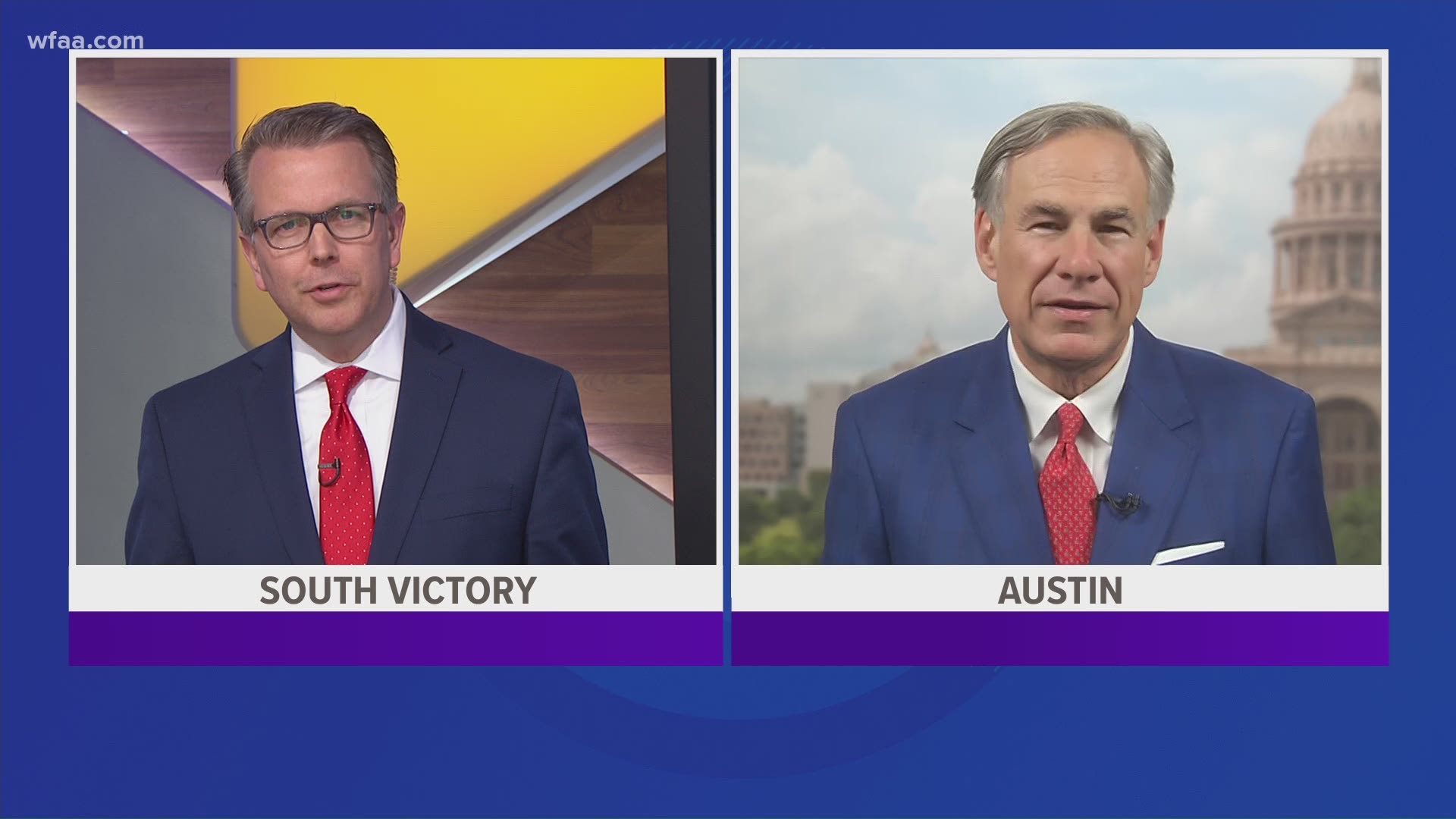 DALLAS — Gov. Greg Abbott joined WFAA for a live interview during the 5 p.m. newscast Friday. In addition to giving a couple updates on COVID-19 efforts in the state, he spent some time answering questions related to police brutality following a number of high profile deaths.

Do you think the other three now-fired officers also face criminal charges for not stepping in, pulling their coworker off the handcuffed suspect?

This is clearly unacceptable tragedy. George Floyd should still be alive today and but for the actions of those police officers, he would be. The officer who had his knee on George Floyd’s neck is rightfully charged.

I believe the others also will be charged. I don’t know what Minnesota law is on this, but I would not be surprised at all to see the other officers be charged also.

Texans who are African Americans say this isn’t poor police work at all — this is systemic. And they’re right in this because we saw this dating back to Rodney King back in 1991. Texas has had its fair share of cases since then as we all know. What can you do as governor to stop this for millions of your African American constituents?

First, in Texas, I believe the police force as well as the government writ large has learned a lot in the aftermath of what happened one or two decades ago.

But we must understand that what happened in Minnesota is unacceptable. And all communities need to come together to ensure that wrongs like this are not repeated.

So many say this is about accountability that bad cops just don’t get long prison time if they get any at all for abusing their authority. What should be done about that from a legislative standpoint?

Well obviously anyone who does wrong, anyone who commits murder, anyone who harms anyone else deserves whatever penalty is appropriate. If I recall correctly, there was a police officer in Dallas, Amber Guyger, who was punished. Is that not the case?

How far are we away from restaurants and bars getting back to 100% capacity and welcoming all their customers back?

Our goal is to make sure businesses continue to open up and continue to open up responsibly. That’s exactly restaurants went from 25% to 50%. We need to see the way that restaurants are able to stage tables so that distancing practices are able to be maintained. That’s why, for example, in pro sports we’re opening up at a 25% capacity so that distancing practices can be maintained.

Here’s the science behind that. We’re in a time period where there are still no meaningful medications that are available to be able to treat COVID-19. There will be many of those coming available perhaps as early as July or August or September.

A lot of Texans don’t feel 100% about getting back out there. They’re waiting to see what happens in the next couple weeks. But I’m curious, have you been back out to eat in Austin with your wife and family? Have you been to the barbershop or out to get ice cream or anything like that?

Been out to dinner four times. Went shopping and got a new iPhone this weekend. So yes, I’ve been out and about. And as you probably saw I was out in Amarillo earlier this week. So I will continue to travel around the state of Texas, showing that people can go out and be safe. 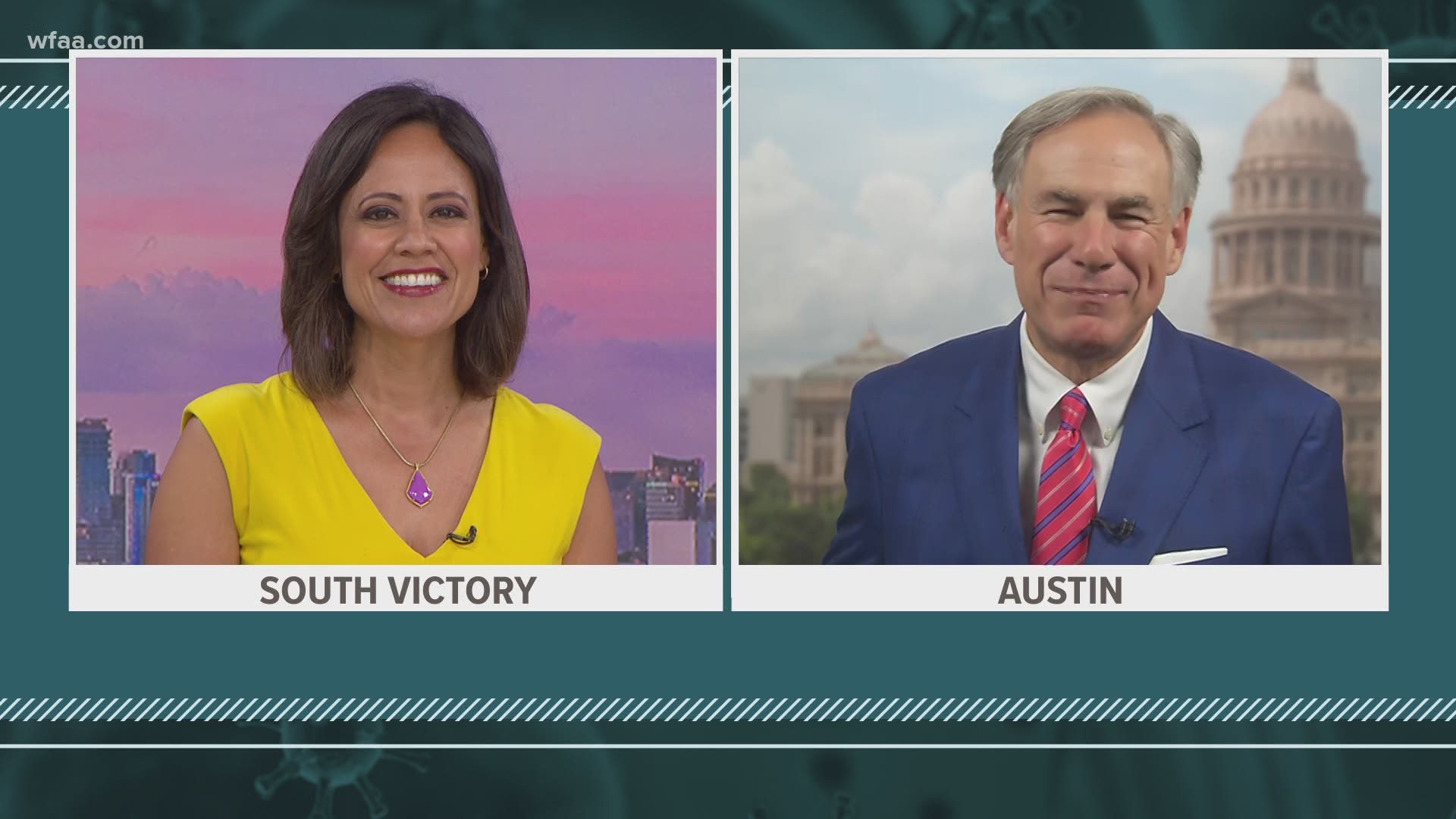