On Monday, KVUE hosted a debate between MJ Hegar and State Sen. Royce West, who are competing for a chance to face U.S. Sen. John Cornyn in November. 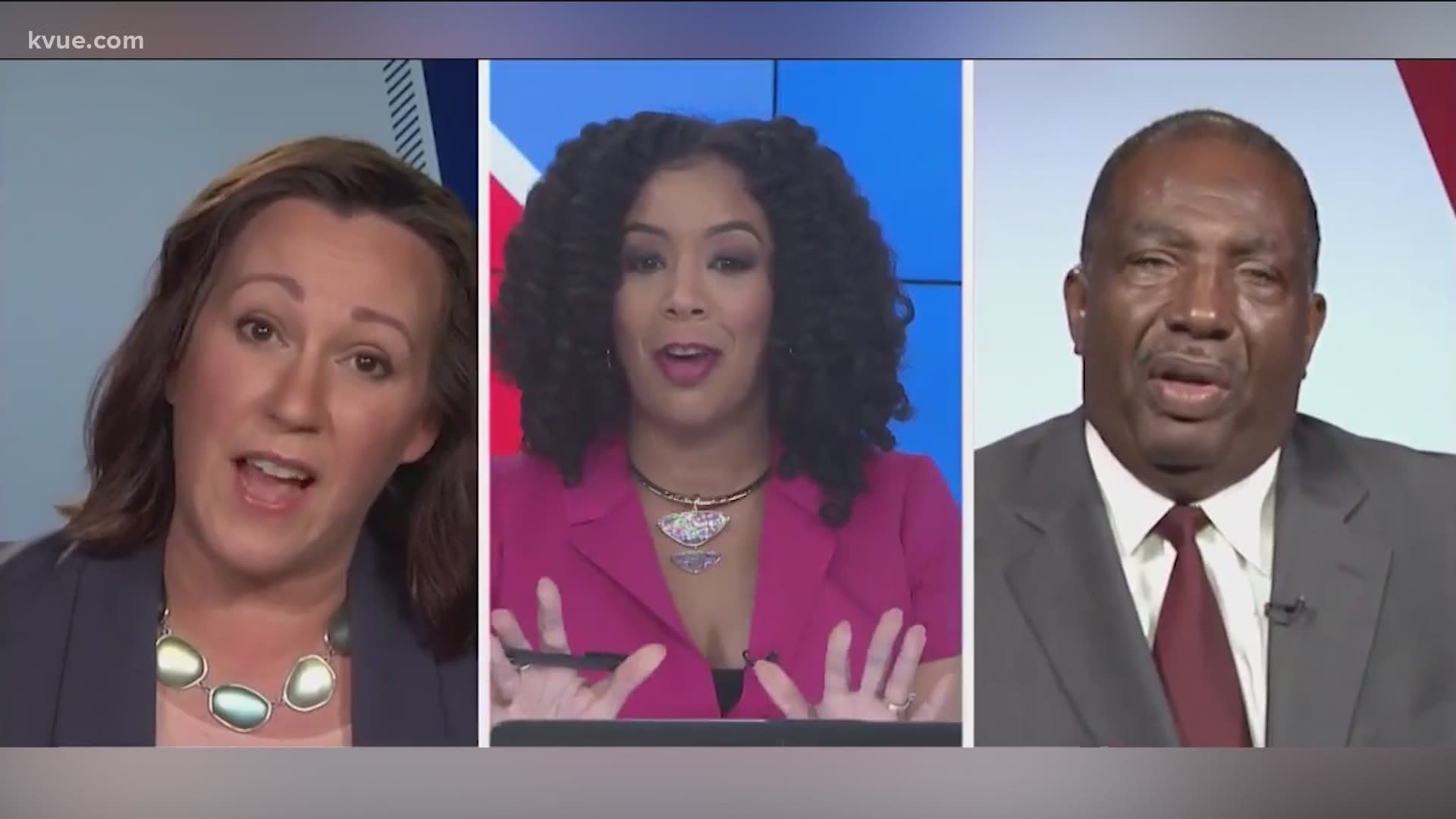 In their opening statements, both Hegar and West made the points that action needs to be taken on a variety of issues, including the increasing number of COVID-19 cases in Texas and across the U.S.

"The world is watching Texas, and they're wondering why our elected officials are prioritizing politics over public health," Hegar said, adding that the attention goes beyond COVID-19 to "why we still have kids in cages" and why the state hasn't expanded mail-in voting to all eligible voters.

RELATED: Timeline: The legal battle over mail-in voting in Texas amid COVID-19

"This election is not about talking points, it's about action ... We're living in unprecedented times. Look at COVID-19, it's, frankly, laid bare the economic inequalities that we're facing," West said.

After opening statements, debate moderator and KVUE Political Anchor Ashley Goudeau moved on to specific questions. When asked what piece of Republican-led legislation they support or see an opportunity to collaborate on, West said health care is something that must be dealt with and Hegar said she thinks there is strong bipartisan support for pharmaceutical pricing.

Goudeau asked both candidates what strategy they would work to put in place to keep people employed and the Texas economy thriving amid COVID-19. Hegar said she would like to see leaders listening to frontline workers, saying, "the health and the economic go hand-in-hand." West said America needs to look at other nations that have been able to flatten the curve to see what steps we need to take next.

The debate began to veer in a slightly different direction when Goudeau brought up reports that Russian bounties offered to Taliban-linked militants led to the deaths of "several" members of the military – and President Donald Trump said he wasn't briefed about the situation. Goudeau asked the candidates how they would address the apparent disconnect between the intelligence community, the White House and Congress.

West put an emphasis on the importance of electing Joe Biden as president, saying that Biden will stand up to Russia. Hegar said the most important thing is that we have accountability and transparency from the administration in power.

In a series of rapid-fire questions, Hegar said the greatest threat to our national security is climate change, while West said it's our reputation with other countries. The candidates disagreed on whether U.S. senators should have term limits – Hegar said yes, West said no – but they are both in favor of expanding mail-in voting and both said they will not send their children or grandchildren back to school campuses this fall.

Both candidates also answered a viewer-selected question about health care: 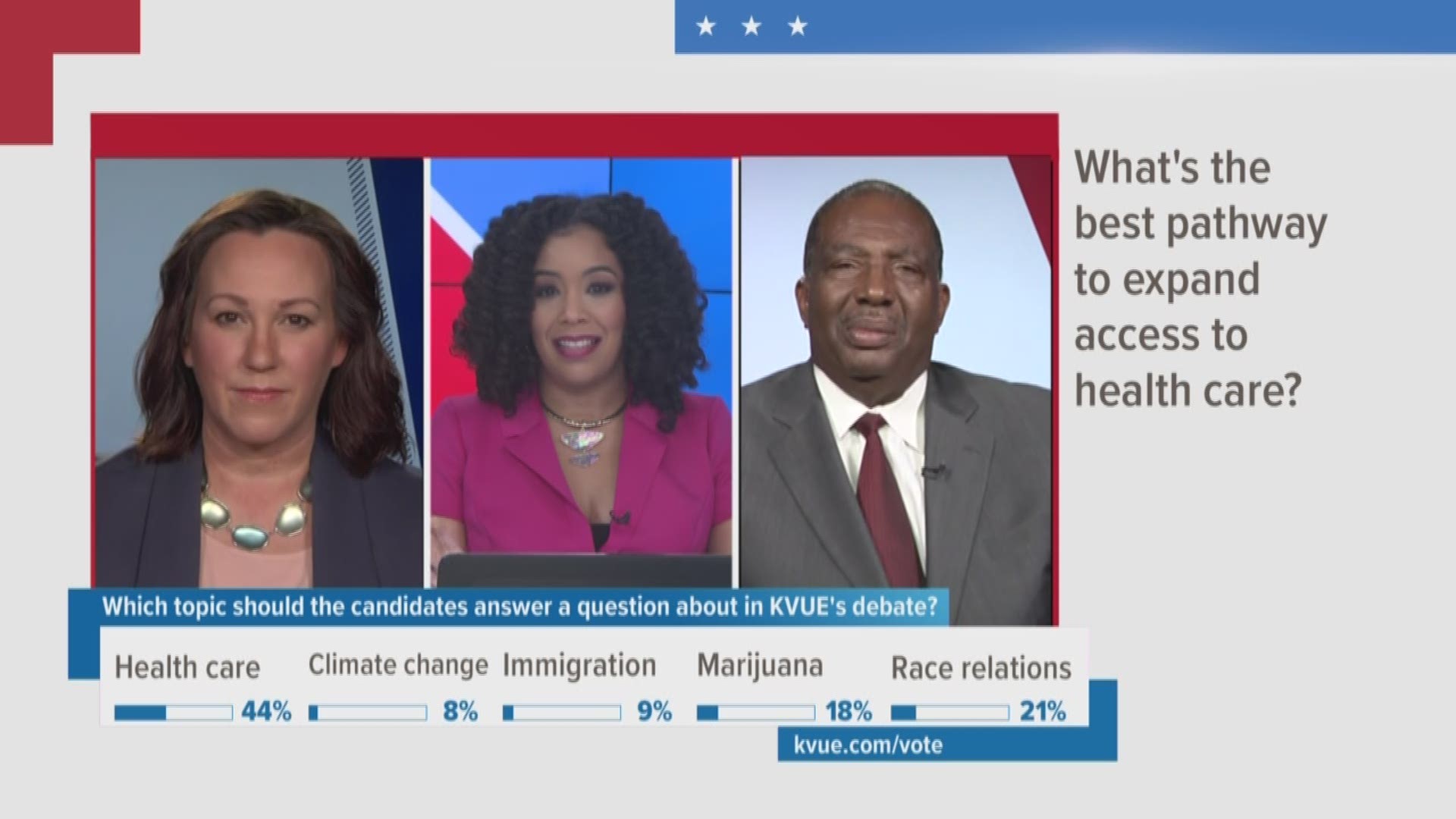 It was in the next part of the debate that the mood drastically changed. Goudeau announced that each candidate would have the opportunity to ask the other one a question. They were then each intended to have one minute to respond, and there wasn't supposed to be a rebuttal.

Hegar said she was most interested in what West thought were the things the two of them have in common that make both of them a better choice for voters than Sen. John Cornyn. West said that they are both Democrats and they need to make certain they work with the party infrastructure and put together a plan for all Texans.

RELATED: Here's what you need to know when you vote in Texas this July

West then asked Hegar why she contributed to Cornyn's campaign in the past and whether it was true that she voted in a Republican primary in 2016. Hegar responded that she was disappointed in West and that that type of question is why people tune out of politics.

"I donated $25 to John Cornyn [in 2011] because I couldn't get a meeting with him if I wasn't on his donor list. That is when I made the commitment to run for office because it's disgusting that you should have to write a check for $25 to get a meeting with your representatives," Hegar said.

Hegar said that West is one of a group of politicians who have become millionaires while in office and "spent their time legislating in their own best interests" instead of those of their constituents. West responded, "Ah, now we get the real MJ Hegar out."

Though Goudeau said everyone had agreed that there wouldn't be rebuttals with these questions, she allowed the conversation to continue. West said Hegar hasn't shown up to debates she said she'd show up to and people have a right to know that she financially supported Cornyn and that she has voted in a Republican primary. Hegar responded that if West is "going to demonize every Democrat that's voted in a Republican primary" in Texas, he's "going to have a hard time building a coalition."

As the candidates discussed this issue, Cornyn's campaign responded on Twitter, saying, "MJ Hegar gave to Senator Cornyn? So should you!"

The candidates continued to try to speak over one another until Goudeau stepped in and said the conversation had to end so that they could each have equal time for their closing statements.

In his closing statements, West emphasized his experience in politics, saying he has demonstrated the ability to work across political aisles and accomplish the things Democrats want accomplished.

"Royce West has been in the mix, getting things done," the state senator said.

Hegar said experience does matter and that she's tired of career politicians condescending to her that her experience in the military, in the health care industry and as a mother don't matter. She also stated that, ultimately, she believes Cornyn won this debate.

"Tonight’s debate was a train wreck for national Democrats and a sad night for Texas Democrats when MJ Hegar accused State Senator West of illegally profiting millions from his elected office. Make no mistake about it, she is alleging Royce West broke the law and now it’s on her to prove it."

You can watch the debate in full below:

Travis County to close all parks over holiday weekend