Mattie Parker and Deborah Peoples weighed in on their visions for the city with the field trimmed and the runoff a month away. 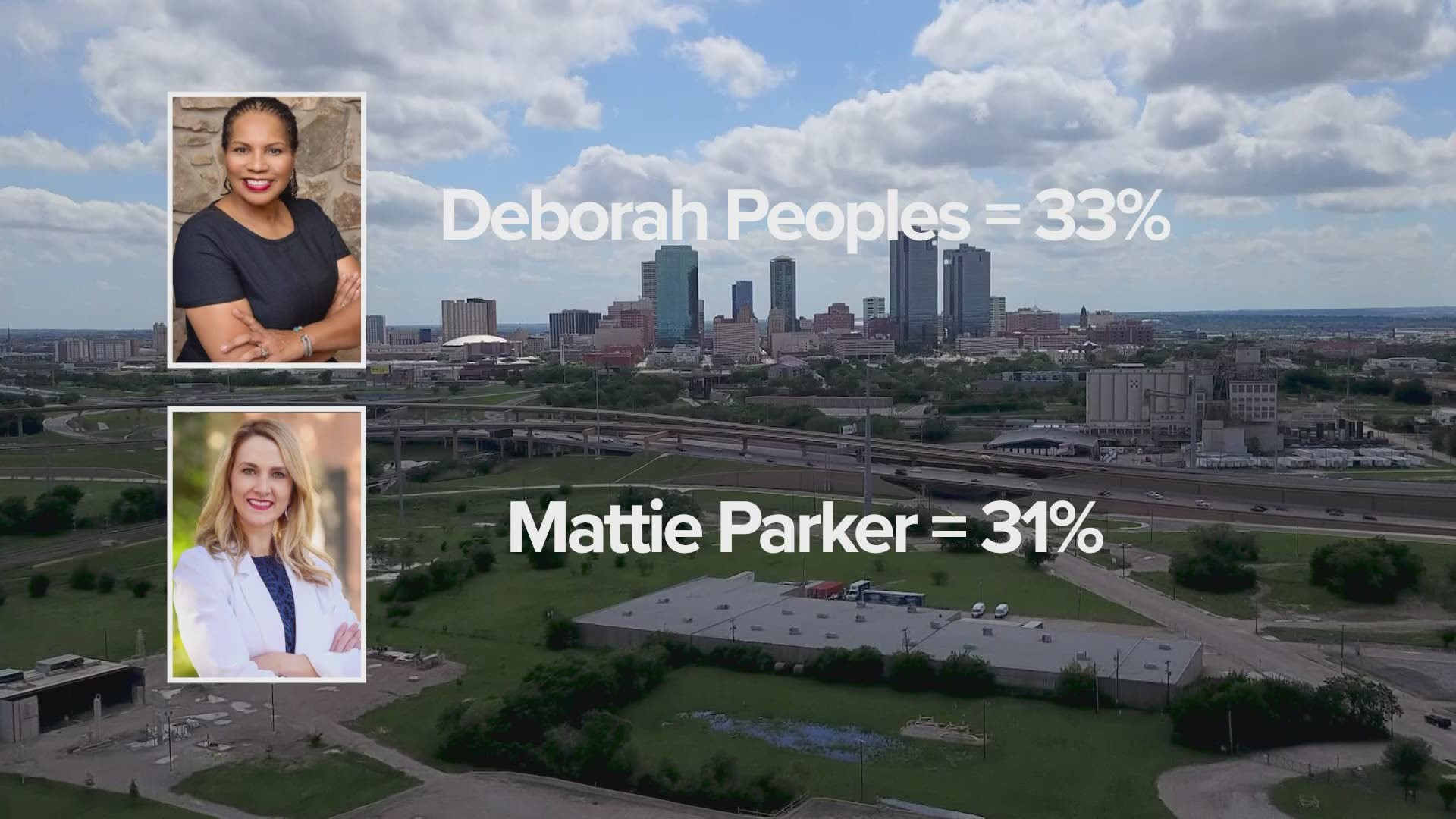 FORT WORTH, Texas — After having to sift through a list of 10 candidates, Fort Worth’s race for mayor has been whittled down to a two-woman runoff.

Across Tarrant, Parker and Denton counties, nearly 68,000 people voted. Deborah Peoples brought in more than 33% of the vote and Mattie Parker took in just under 31%.

Peoples said Sunday she was energized by Saturday’s results.

“Didn't go to bed till about 2:30 a.m.,” Peoples said. “Was up to go to church this morning and have already been talking to residents.”

Parker said she was happy, too, but spent the day taking a break from politics and taking in a Rangers game with her family.

“We wanted to run a campaign that really resonated with voters,” she said. “I think we proved that.”

“I know people try to give taglines, but I want people to see me as the most experienced candidate in this race, with a proven history and a track record of leadership,” Peoples said.

“I’ve demonstrated, not only am I ready; I’m more than capable and I’m the most experienced and have been in this race,” Parker said. “I’ve really tried to resonate with folks about my vision for the city, my grasp of the issues and what it takes to govern in a large city.”

Parker is an attorney, founder of an education nonprofit and the former chief of staff for Mayor Betsy Price. She says she won’t be just a continuation of Price’s vision.

“Things are not perfect in Fort Worth, but I do think, again, we’re positioned for greatness,” she said.

Her goal is to encourage entrepreneurship and wants to use 2021 to bring businesses to Fort Worth as they reevaluate plans post-pandemic.

“I think that’s where our time is to strike and go on a roadshow across the country to sell this city,” she said.

Peoples is the chair of the Tarrant County Democratic Party and a former AT&T vice president who moved to the city back in 1975 and says the status quo isn’t working for the whole city.

“There are many citizens who feel like their voice hasn't been heard,” she said. “We're growing. The trick is to make all those people understand that if we want to keep that same Fort Worth feel, we've got to address it differently and be smarter about how we plan for growth.”

She wants improvements to housing, a comprehensive multi-modal transportation plan and more jobs for people without college degrees.

In a city with historically low turnout, both need to attract new voters and get supporters back to the polls on June 5th.