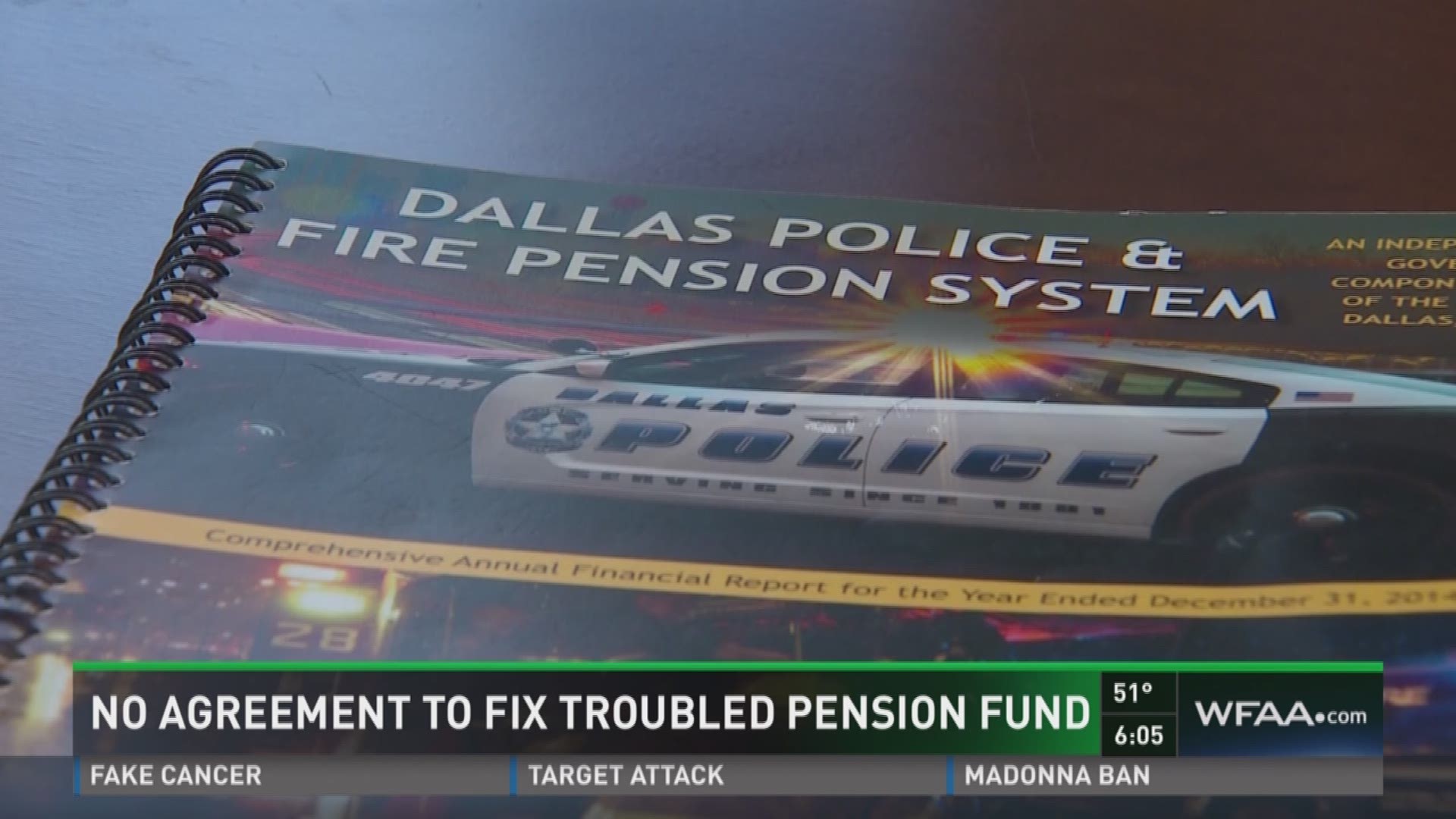 News 8 has learned that four city council members will likely file a lawsuit against the pension system contending, among other things, that it is violating its fiduciary duties by agreeing to release money held in high-interest savings accounts known as DROP.

“This is not a step that the four (council) pension trustees have taken lightly,” Council member Philip Kingston said during the council meeting. “There is a severe problem at the pension. We need the help of a court, I believe, in order to sort it out. The idea is not to damage the system, but to save it.”

Earlier this month, all four council members who sit on the board – Erik Wilson, Philip Kingston, Scott Griggs and Jennifer Gates --voted against the board’s plan that would create an orderly withdrawal process from what’s known as DROP – or Deferred Retirement Option Plan -- accounts. These are special high-interest savings accounts and a big reason the pension is going broke. The fund has a nearly $4 billion shortfall.

The resolution approved by the city council Wednesday encourages the council members who serve on the pension board to “take all available actions to address the system’s dire financial situation.” It authorizes paying any costs arising from “those actions.”

“We’re in uncharted waters right now,” Gates said, “and it’s really important to us for those that are putting ourselves out there as trustees for the pension that we have our support of our council and that if we find ourselves in legal issues that we are indemnified by the city.”

Armando Garza of the Dallas Hispanic Firefighters Association was critical of the prospect of the council board members filing a lawsuit.

“It brings up more questions and more turmoil and instability,” he said. “We need to be working together, not dividing on this issue.”

The looming legal action comes as city officials, pension officials and representatives of police and fire associations came together for marathon mediation sessions Monday and Tuesday. They were trying to come to an agreement on a plan to take to state legislators.

Those talks ended without a deal being reached and it now appears likely that it will be left to state legislators to cobble together a solution. The pension fund is governed by state statute, not by city ordinance.

“We left there Monday night and we thought we were very, very close to a deal,” Garza said. “Both sides were making concessions. Both sides were really far apart, but they are starting to come together.”

The associations were not present for talks on Tuesday when negotiations reached ended in a stalemate around midnight.

“All of the sudden the wheels fell of the train,” Garza said.

Members of the police and fire associations met for two and half hours at the pension fund Wednesday. Board chair Sam Friar updated the associations on the results of mediation.

The pension fund issued a statement this afternoon criticizing the city’s latest actions.

“The city of Dallas has a long, expensive and unsuccessful track record of litigating disputes rather than working with others to resolve conflict,” it said.

The statement points out that the city officials even now are “begging” the legislature for sovereign immunity to protect it from a potential $4 billion liability from back-pay lawsuits dating back to the 1990s.

“Based on the City Council resolution from today’s meeting, it appears that the city will continue to litigate to try to get its way,” the statement says. “Efforts by the new pension board and the city to present a unified bill to state legislators have all but collapsed as a result of the city’s resolution. But the Dallas Police & Fire Pension System cannot support any plan that leaves a single retiree or future retiree without a retirement.”

In Kingston’s view, legal action is needed to give time to restructure the pension to save it and to stave off a looming liquidity crisis.

“There is every chance that unless we are able to liquidate illiquid assets at fire sale prices that we are looking at the possibility retirees not receiving their checks in a year or so and that’s a terrifying prospect,” Kingston said during the meeting.

Kingston pointed out that there are 1,300 retirees who live on less than $2,500 a month. He says the board’s plan to continue DROP withdrawals – “even on a limited basis mathematically shortens the period of time that we can pay benefits to some of our oldest and most vulnerable retirees.” He contends says violates the board’s fiduciary duty to treat all beneficiaries equitably.

If no changes are made to the pension, it could become insolvent in as soon as 2028. That would mean that it would not be able to pay benefits.

Tensions have continued to escalate after the city’s chief financial officer Elizabeth Reich presented a proposed plan last week that would set aside the failing retirement fund and create a new fund. The alternative would let many police and firefighters transfer over to the new city-run pension with reduced guaranteed benefits. The pension system would then be left with the job of figuring out how to pay the remaining money to the workers and retirees not covered by the new plan.

That proposal triggered an angry response from Kelly Gottschalk, the executive director of the fund.

“I have to say that in my more than 25 years in the public sector, that is by far, the worst display of public administration, public integrity and ethics I’ve ever seen,” Gottschalk wrote in an email to the board.

Gottschalk’s email goes on to say she feels outgoing City Manager A.C. Gonzalez “may have hampered” the negotiations and “doesn’t care about ongoing operations of the city.”

Gonzalez, who retires Friday, called Gottschalk’s assertions “incorrect in the extreme,” but added that it serves no purpose to talk in detail about it.

“We have remained focused on trying to get to a solution,” he said.

He says progress had been made and said he remained hopeful that a deal could be made to take to the legislature.

The city has agreed to put in an additional billion dollars over 30 years, but they're proposing a series of bitter pills to make up the rest of the nearly $4 billion shortfall.

The bitterest pill: A proposal to take back the interest police and firefighters earned on Deferred Option Retirement accounts. That would amount to an additional $1 billion saved.

For those retirees who have already taken the money out of DROP accounts, they'd garnish their future pension checks to recoup excess interest.

The pension wants a provision included in the legislation that would require the city’s claw back provision to be immediately reviewed by the Texas Supreme Court upon passage of the legislation.

It’s all just the latest in a round of rising tensions between the pension fund, city officials and retirees.

Last month, police and firefighters rejected a series of changes to try to rescue the failing fund last month. That plan would have fixed about 50 percent of the problem.

DROP, which was created in the early 1990's, allowed police and firefighters to retire while still on the job. Their monthly pension checks then were deposited into DROP accounts, which were guaranteed an eight to 10 percent interest.

The pension continued to pay those high interest amounts in the bad years even when the fund lost hundreds of millions of dollars.

The excessive interest paid on those DROP accounts, along with years of bad real investments made by past fund leaders, are a major reason for the fund's looming insolvency.

“We did the two things you can’t do as a public pension: Pay too much in benefits and lose too much money investments and we did them both at the same time,” Kingston said in an interview.

DPFP Statement on Dallas Council Resolution 1.25.17 by wfaachannel8 on Scribd