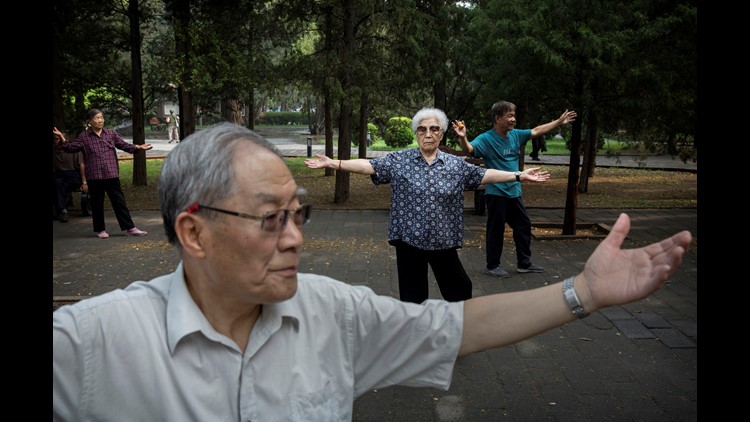 Yoga vs. Tai Chi: Which is better?

But just like family members are a lot alike, they're also very different.

ABC10 spoke to a Carmichael woman who turns 100-years-old next week and practices tai chi every day. Can practicing tai chi help you live longer than if you practice yoga?

Let's learn a little bit about both exercises.

Tai chi is a mind-body practice that originated in China as a martial art, according to Supreme Chi Living, an online journal by the American Tai Chi and Qigong Association. A person doing tai chi moves their body very slowly in a dance-like flow, while breathing deeply and meditating. Many people who practice tai chi believe it helps the flow of 'qi' — a vital energy — throughout the body.

Supreme Chi Living explains, one of the core concepts of tai chi is that the forces of Yin and Yang should be in balance. In Chinese philosophy, Yin and Yang are two principles or elements that make up the universe and everything in it and that also oppose each other. People's Yin and Yang need to be in balance in order for them to be healthy, and tai chi is a practice that supports this balance, according to the online journal.

Fans of tai chi, believe it helps ease stiffness and pain. People also practice to have better sleep and feel overall healthier. Its also been known to help with muscle strength, coordination, cardiovascular endurance and flexibility. Even though tai chi is for people of all ages, because it's a low impact exercise, it especially benefits the elderly.

In fact, a 2014 study found elderly people who practiced tai chi had greater connectivity in the part of their brain that is related to decision-making and attention, than older adults who were sedentary.

In the U.S., people don't have to be licensed to teach tai chi. There is no standard training for tai chi teachers, according to Supreme Chi Living.

So, what exactly is yoga and how does it differ from tai chi?

The word yoga means “to join or yoke together," — and it brings the body and mind together into one harmonious experience, according to the American Yoga Association. Yoga is believed to have developed over 5,000 years ago in India and considered to be more of a lifestyle than just an exercise.

The practice involves holding poses, stretching and breathing techniques. Similar to tai chi, it has three main components — exercise, meditation and breathing. The five main benefits of yoga are:

Like tai chi, yoga also helps with improving muscle tone and strength, as well as with respiration and cardio health, according to the American Osteopathic Association.

Once tai chi and yoga are broken down individually, it's safe to say, they're almost identical in benefits and components. The main difference is in execution. Yoga involves holding poses and postures. Tai chi is performed in a dance-like, martial arts form. Both can be rigorous, or low impact, depending on the person's fitness level.

As for whether one form of exercise helps you live longer than the other, that's still being explored and cannot be answered scientifically. For now, given the similarities, it's likely either exercise will at the very least make you feel healthier, mind and body. You just have to decide whether you prefer a martial arts style, or holding poses.