Nearly three-dozen people plan to tell their stories before the man known as the Golden State Killer is formally sentenced to life in prison. 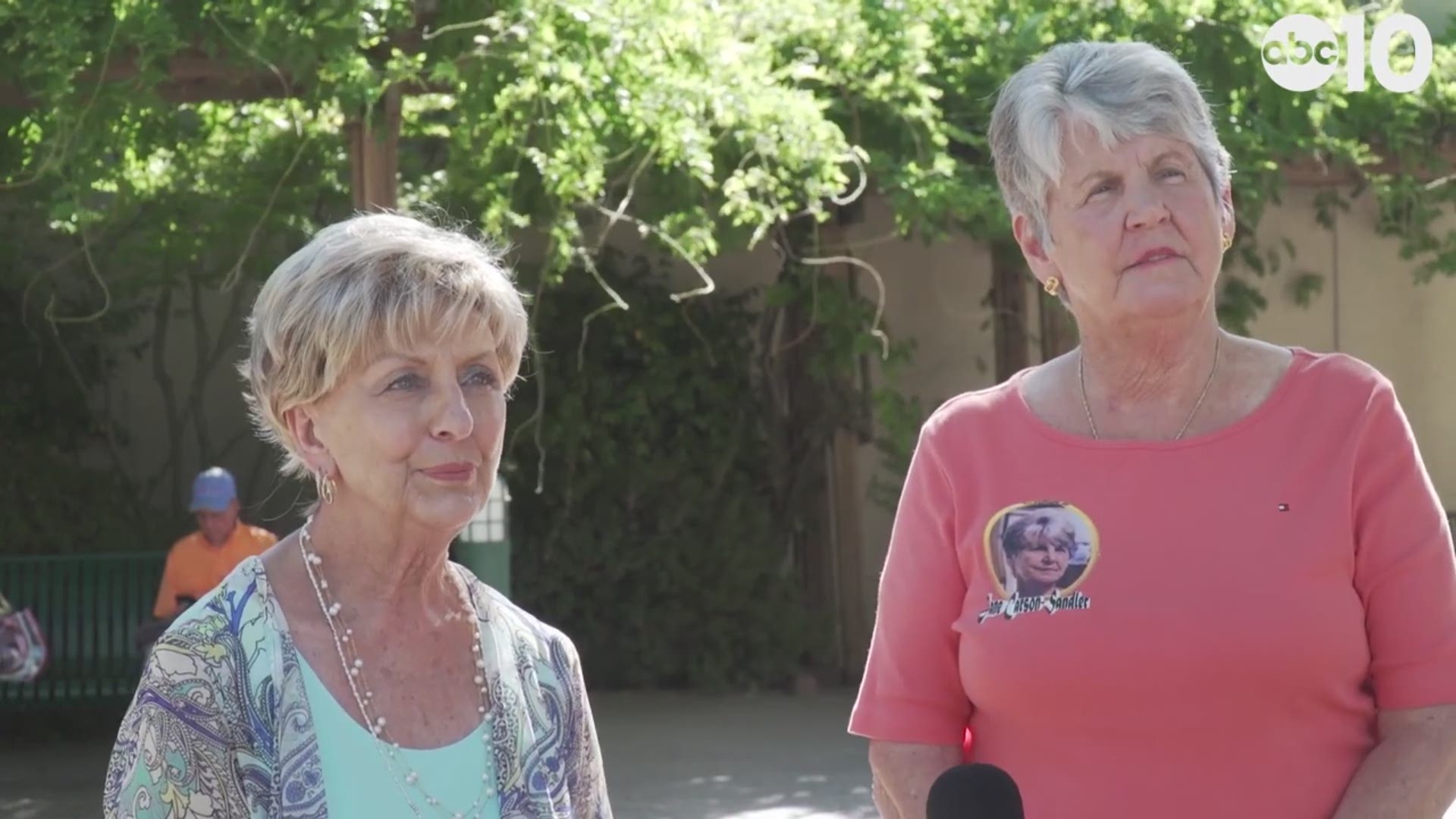 SACRAMENTO, Calif. — Jane Carson-Sandler says she has served an effective life sentence in the more than four decades since she was one of the first rape victims of a one-time police officer who eventually became known as the Golden State Killer.

Carson-Sandler will be among nearly three dozen victims or survivors who plan to confront DeAngelo this week during an extraordinary four days of court hearings before the 74-year-old is sentenced to life in prison.

Some plan to tell of their pain, others of their healing.

It's the culmination of a plea deal that will spare him the death penalty for 13 murders and numerous sadistic rapes and burglaries that terrorized California for more than a decade. The perpetrator behind the reign of terror mystified investigators until they used a new form of DNA tracking to arrest him in 2018.

“Our wounds heal and our scars remain,” Carson-Sandler said.

Certain things always trigger flashbacks to that night in 1976 when DeAngelo confronted her with a butcher knife as she snuggled in bed with her 3-year-old son after her husband left for work at a nearby military base.

She can't go skiing, for fear she'll see someone in a ski mask like the one DeAngelo wore. The sound of a helicopter is another trigger, because “after the attack the helicopters would fly over every night with spotlights on the ground, looking for DeAngelo.”

DeAngelo pleaded guilty in June to 13 counts of murder and admitted to dozens of rapes that were too old to prosecute. His attorneys did not respond to a request for comment.

All told, he admitted to 161 crimes involving 48 people.

Credit: AP
FILE - In this June 29, 2020, file photo, Jane Carson-Sandler, a 1976 rape victim of Golden State Killer Joseph James DeAngelo, stands and gives a double thumbs-up to agree with a prosecutor's statement about part of DeAngelo's anatomy, during a court hearing in Sacramento, Calif.

Kris Pedretti was 15 when DeAngelo attacked her just before Christmas in 1976.

“This kid who liked to go shopping and do cartwheels on the lawn, that girl was gone,” she said.

She lost her friends, her once profound faith in God, switched schools three times, had two failed marriages, and “did a lot of self-medicating, a lot of poor coping mechanisms.”

It wasn't until DeAngelo's arrest that she sought therapy and changed her life again.

She's now happily married, is described by other survivors as the “den mother" who helps organize pot luck dinners after each of DeAngelo's court appearances, and this year she started a Facebook group for sexual assault survivors. It now has more than 300 members.

“He didn’t win, I’m not a lost girl. I want to make that clear," Pedretti said.

After attacking Pedretti, DeAngelo soon escalated from targeting single women and girls to humiliating their husbands and boyfriends.

He would tie up the man and pile dishes on his back, then threaten to kill both victims if he heard the plates rattle while he repeatedly raped the woman.

That's what happened to Bob and Gay Hardwick, who were living together in Stockton in 1978.

“That’s been with me for 42 years now, and in my view that’s a long life sentence for someone to serve who didn’t deserve to serve it," she said. “Not one of us, the survivors, deserved to have this kind of violence and hatred and desecration put upon them.”

Victor Hayes, who with his then-girlfriend endured a similar assault in 1977, is now more angry with police and prosecutors than he is with DeAngelo. At the least, Hayes said DeAngelo should have been forced to publicly admit that he acted under color of authority by using his knowledge of police procedures to avoid arrest.

DeAngelo was a cop for the first six years of his onslaught — the first three years when he was known as the Visalia Ransacker for about 100 burglaries and one slaying in that San Joaquin Valley farm town; the next three years in the Sierra foothills city of Auburn northeast of Sacramento, until he was fired for shoplifting dog repellent and a hammer.

DeAngelo killed two more people in Sacramento — a couple out walking their dog — but committed most of his murders after he left the police force and moved to Southern California, where he was dubbed the Original Night Stalker.

Some survivors plan to use props in court to try to break through to DeAngelo, who they think is malingering as a feeble old man in a wheelchair to hide that he remains a mentally and physically sharp, soulless killer.

Carson-Sandler wore a T-shirt with “Victim Survivor Thriver” to his previous court hearings, and drew applause and laughter during his guilty plea when a prosecutor included her observation that DeAngelo “had a small penis.” She plans to wear a new T-shirt that “starts with ‘Itsy-Bitsy.’"

Two of the families plan slideshows to illustrate their losses.

Counter-intuitively, Jennifer Carole said she will concentrate on what she called the “silver linings” — the survivors who have grown so close. She is the daughter of victim Lyman Smith, a lawyer who was slain at age 43 in Ventura County in 1980. His wife, 33-year-old Charlene Smith, was raped and killed.

She plans to urge everyone to “find a way to do good. I think it is within our power to do good things and take care of each other.”