President Trump framed his plan as an alternative to the 'defund the police' movement that has emerged from protests and which he slammed as 'radical and dangerous.' 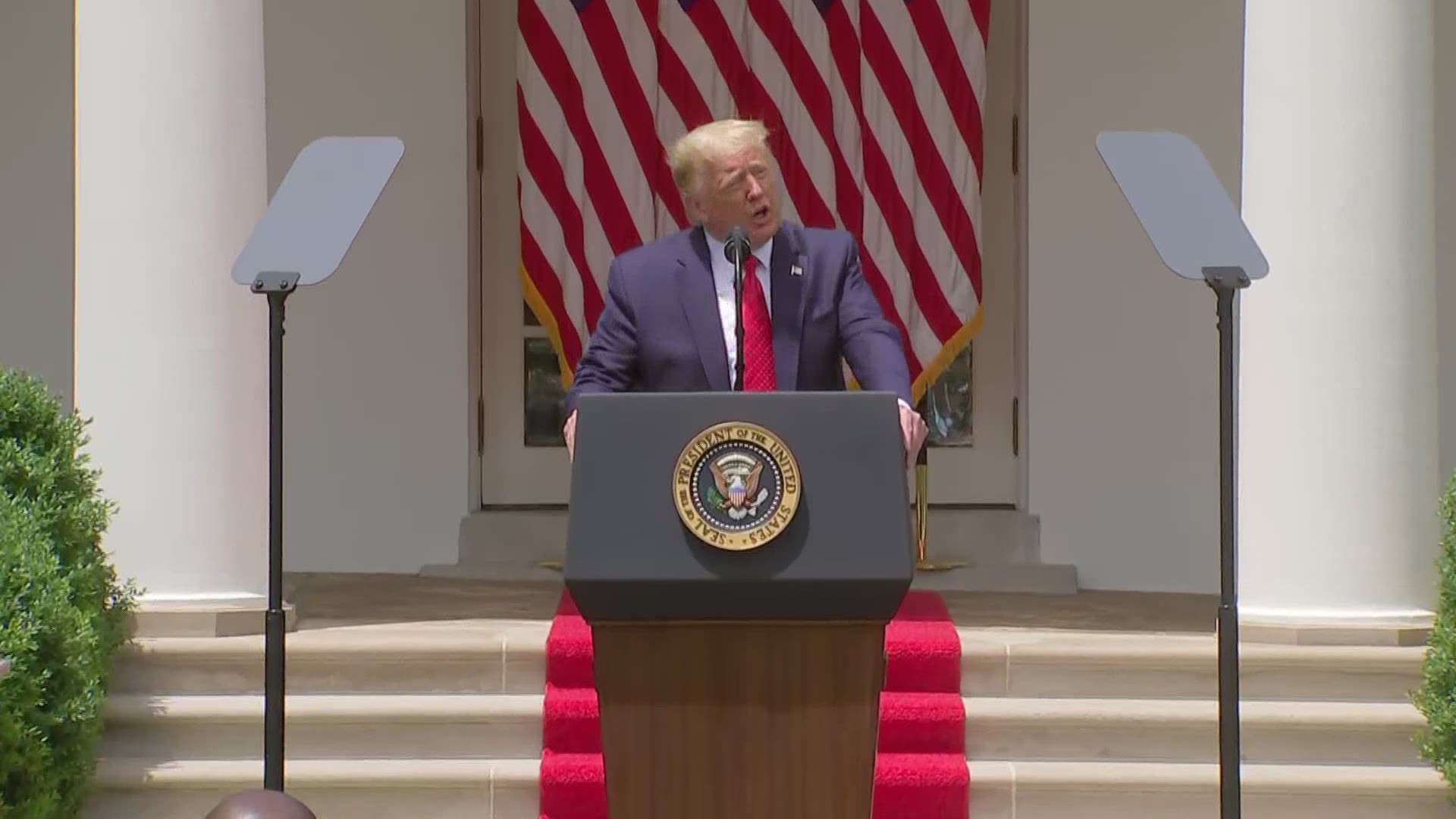 WASHINGTON — Following weeks of national protests since the death of George Floyd, President Donald Trump signed an executive order on policing Tuesday that he said would encourage better police practices and establish a database to keep track of officers with a history of excessive use-of-force complaints.

In Rose Garden remarks, Trump stressed the need for higher standards and commiserated with mourning families, even as he hailed the vast majority of officers as selfless public servants and held his law-and-order line, while criticizing Democrats.

“Reducing crime and raising standards are not opposite goals," he said before signing the order flanked by police.

Trump and the GOP have been rushing to respond to the mass demonstrations against police brutality and racial prejudice that have raged for weeks across the country in response to the deaths of Floyd and other black Americans. It's a sudden shift for the Republican Party — and one Democrats are watching warily — that shows how quickly the protests have changed the political conversation and pressured Washington to act.

But Trump, who has faced criticism for failing to acknowledge systemic racial bias, has continued to emphasize his support for law enforcement, even after meeting in private Tuesday with families of victims. At the signing event, he railed against those who committed violence during the largely peaceful protests and made no mention of racism.

Trump’s executive order would establish a database that tracks police officers with excessive use of force complaints in their records. And it would give police departments a financial incentive to adopt best practices and encourage co-responder programs, in which social workers join police when they respond to nonviolent calls involving mental health, addiction and homeless issues.

Trump said that, as part of the order, the use of chokeholds would be banned “except if an officer’s life is at risk." However, senior administration officials said the order would instead promote certification bodies that train officers in de-escalation techniques and use-of-force standards that prohibit chokeholds ”except in those situations where deadly force is allowed by law." Chokeholds are already largely banned in police departments nationwide.

Trump framed his plan as an alternative to the “defund the police” movement that has emerged from the protests and which he slammed as “radical and dangerous."

“Americans know the truth: Without police there is chaos. Without law there is anarchy and without safety there is catastrophe," he said.

Trump's audience included police officials and members of Congress, and came after he met at the White House with the families of men and women who have been killed in interactions with police. That included the families of Botham Jean, Antwon Rose, Jemel Roberson, Atatiana Jefferson, Michael Dean, Darius Tarver, Cameron Lamb and Everett Palmer. The president said he also met with the family of Ahmaud Arbery, who was shot and killed by two white men while jogging in Georgia.

“To all of the hurting families, I want you to know that all Americans mourn by your side," Trump said. "Your loved ones will not have died in vain.” 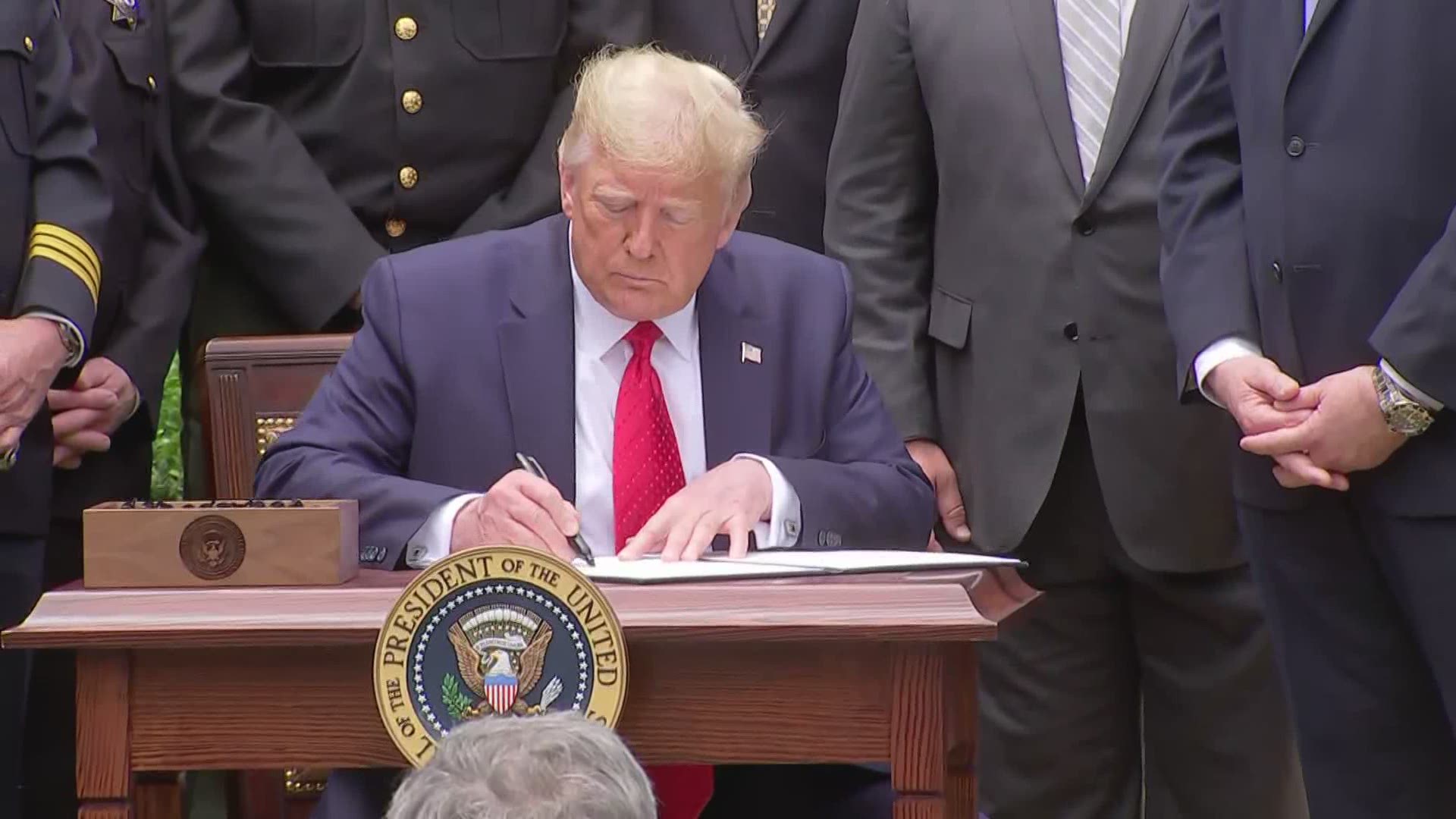 The Rose Garden announcement comes as Senate Republicans are preparing their own package of policing changes. Sen. Tim Scott of South Carolina, the sole African American Republican in the Senate, has been crafting the GOP legislative package, which will include new restrictions on police chokeholds and greater use of police body cameras, among other provisions.

The Senate Judiciary Committee was to conduct a hearing Tuesday afternoon on “Police Use of Force and Community Relations," drawing testimony from leading civil rights and law enforcement leaders.

“Now is the time to reimagine a more fair and just society in which all people are safe,” Vanita Gupta, president and CEO of The Leadership Conference on Civil and Human Rights, was to tell senators, according to advance testimony obtained by The Associated Press.

The nationwide outcry "is anything but a reaction to one isolated incident or the misconduct of a few 'bad apples,’” Gupta says. “The outcry is a response to the other horrific killings of black people by police.”

While the emerging GOP package isn't as extensive as sweeping Democratic proposals, which are headed for a House vote next week, it includes perhaps the most far-reaching proposed changes to policing procedures from the party long aligned with a "law and order” approach.

Scott, who said he spoke with Trump about the legislation over the weekend, warned Monday that delaying voting until later this summer would be a “bad decision.”

The weekend shooting death of Rayshard Brooks by a white officer in Atlanta led to a renewed public outcry, more street protests and the police chief’s resignation.

Senate Democratic leader Chuck Schumer of New York is among those urging Republicans not to settle for minor changes.

“Now is the time to seek bold and broad-scale change,” Schumer said Monday.

With the political debate fluid, it is unclear whether the parties will be able to find common ground. The proposals emerging from Democrats and Republicans share many similar provisions but take different approaches to address some of the issues. Neither bill goes as far as some activists want in their push to “defund the police” by fully revamping departments.

Central to the Republican package would be the creation of the national database to improve transparency so officers cannot transfer from one department to another without public oversight of their records. The Democrats have a similar provision.

Yet the Republican bill does not go as far as the Democrats do on the issue of eliminating qualified immunity, which would allow those injured by law enforcement personnel to sue for damages. The White House has said that is a step too far. As an alternative, Scott has suggested a “decertification” process for officers involved in misconduct.

One large police union, the influential Fraternal Order of Police, said in a statement it is working with Congress and the White House on the proposals, having provided “feedback” on the Democratic bill and “substantial input” on the emerging GOP package.