Lanternflies have been annoying people in Pennsylvania since their arrival five years ago, and they aren't shy about getting in your face. 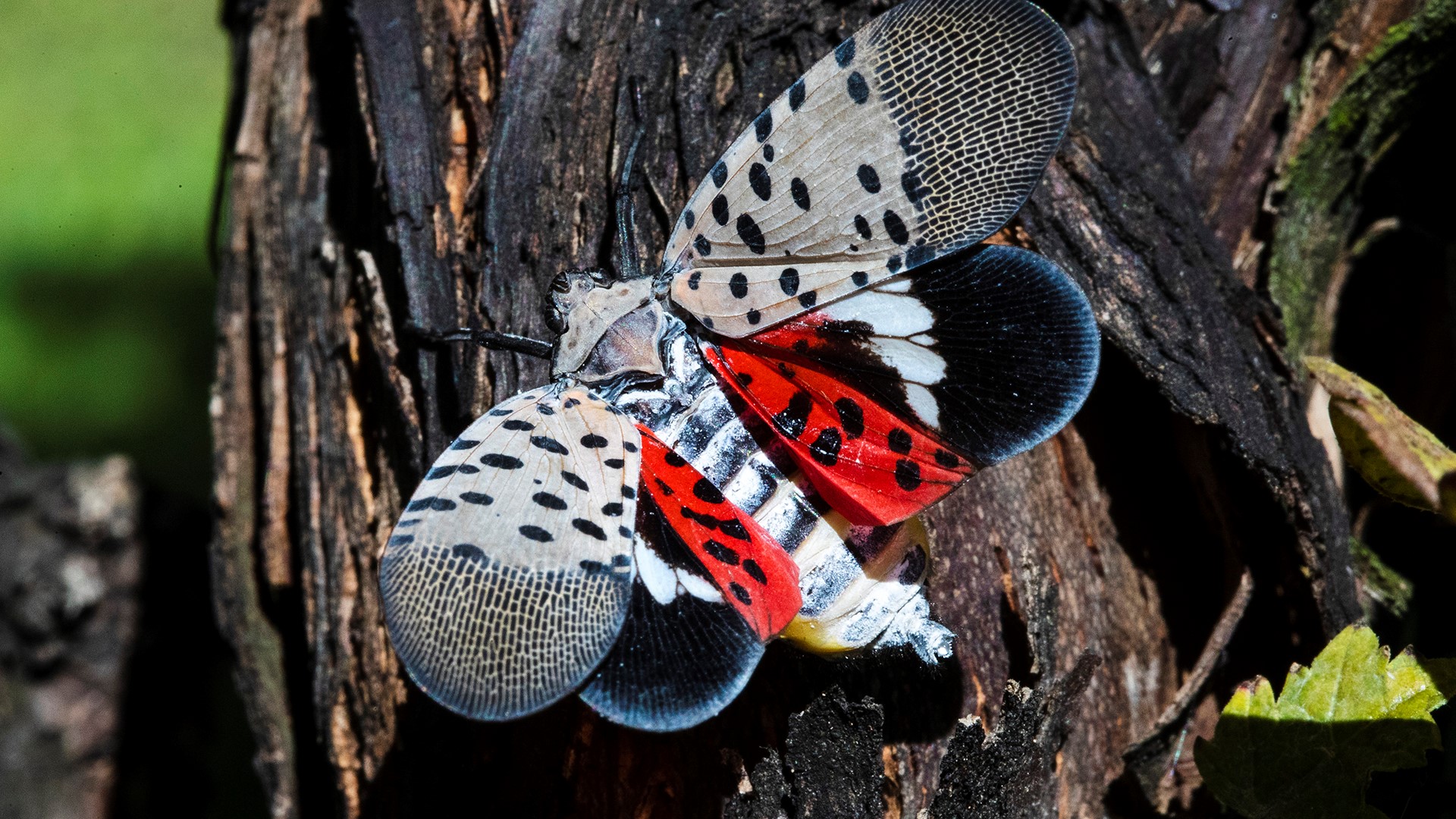 KUTZTOWN, Pa. — KUTZTOWN, Pa. — In the Great Spotted Lanternfly War, Pennsylvania's citizen-soldiers are fighting back with fly swatters and vacuums, dish soap and sticky tape. They're stomping and spraying and zapping and bragging about their kills on social media. "DESTROY THEM," a propaganda poster urges. "Die, die, die, spotted lanternfly," a balladeer sings.

And still the invaders come, hordes of them, relentless and seemingly inexhaustible. The lanternflies' rampage has been slowed but not stopped.

The insect — a large, colorful planthopper native to southeast Asia — has emerged as a serious pest since the federal government confirmed its arrival in southeastern Pennsylvania five years ago. It sucks the sap from valuable trees and vines, weakening them. It rains its clear, sticky, sugary waste — euphemistically called "honeydew" — onto pools and decks, driving exasperated homeowners indoors when they're not too busy killing the fluttering buggers.

Lanternflies aren't shy, either. They will fly in your face, land on your shirt and crawl on the back of your neck.

RELATED: Keeping insects out of your home

RELATED: Monarch butterflies joined by other species in migratory trip through Northeast Ohio to Mexico

More worrisome, the state agriculture department says the lanternflies threaten $18 billion worth of Pennsylvania agriculture, including tree fruit, timber, hops and especially grapes. And the bug has expanded its range into New Jersey, Delaware and Virginia, alarming officials in those states and beyond as well as the U.S. Department of Agriculture, which is involved in containment and suppression efforts.

Though researchers are looking for ways to eradicate the red-winged interloper, "controlling them on a population level is almost impossible at this point," said Heather Leach, an entomologist who does lanternfly outreach at Penn State Extension.

Lori Beatrice can relate. Battalions of bugs have been swarming her back deck in Phoenixville, about 30 miles (48 kilometers) from Philadelphia. She and her husband have killed thousands, but "we're outnumbered," Beatrice said. "It's just gross. It's disgusting. It's like waking up in a nightmare."

Dean Scott, who grows grapes for local wineries around Kutztown, has been spraying insecticide on his vines in an effort to keep the bugs at bay. It works for a few days, but they inevitably return. The carnage is evident in the blackened trunks of diseased grapes vines, and in the thousands of dead insects that litter the vineyard. One of Scott's fellow growers left the business after losing 40 acres (16 hectares) of vines.

"It's depressing," said Scott, whose vineyard produces 12 tons (11 metric tons) to 15 tons (14 metric tons) of grapes each year, and who is counting on it to help support him in retirement. "My fear is that if this continues, we're going to lose the battle here in Pennsylvania."

Scientists from Penn State University, Cornell University and elsewhere are trying to prevent that from happening. They're testing chemical and biological methods of control, including native fungi implicated in a lanternfly die-off in Berks County. Government contractors, meanwhile, are removing tree of heaven — an invasive tree that is the lanternflies' preferred host — from public property. The states with the heaviest infestations have established quarantines meant to limit the bugs' spread.

And now, with females beginning to lay their eggs, Pennsylvania is encouraging its citizen militia to scrape the mud-like egg masses from trees, cars, lawn furniture, outdoor equipment and other surfaces.

"We're heading into the season where everyday people can have the greatest impact on what happens next year," said Department of Agriculture spokeswoman Shannon Powers. "Every egg mass you scrape gets rid of 30 to 60 inspects that might hatch out next season."

In some quarters, the situation has become darkly comic.

Philadelphia police asked residents to stop calling 911 to report lanternfly sightings, tweeting that while the insects are a nuisance, they're not, strictly speaking, a matter for law enforcement. "And on that note, we, for one, would like to welcome our new insect overlords," the department quipped.

The public address announcer for Allentown's minor-league baseball team is working on a mock movie trailer in the old-timey style of Ken Burns' documentary "The Civil War," casting himself as a sepia-toned Army commander and the lanternflies as combatants. Another fake preview reimagines the insect invasion as a flesh-crawling horror film , its tagline: "How many did you kill today?" Someone else developed a gross-out app called "Squish" on which users track and map their lanternfly kills and post photos of the crumpled carcasses.

If most Pennsylvanians in the Great Spotted Lanternfly War are regular Army, Jim Wood is Special Forces.

To deal with the swarms of lanternflies that have been attacking his trees, Wood turned a wet/dry vac into an effective killing machine. He attached a piece of plastic bottle to the business end of a long wand, allowing him to capture that many more insects with each pass. The insects, in turn, get sucked into a nylon stocking. Wood goes on patrol at least once a day, estimating he's killed nearly 40,000 this year.

But even this super-soldier can get discouraged by the sheer size of the enemy force.

"There are some days I just wanted to quit," he said.