More than 7.1 million votes had been cast by Saturday, Oct. 24 in Texas. That's about 42.43% of all registered voters, according to the Secretary of State's office. 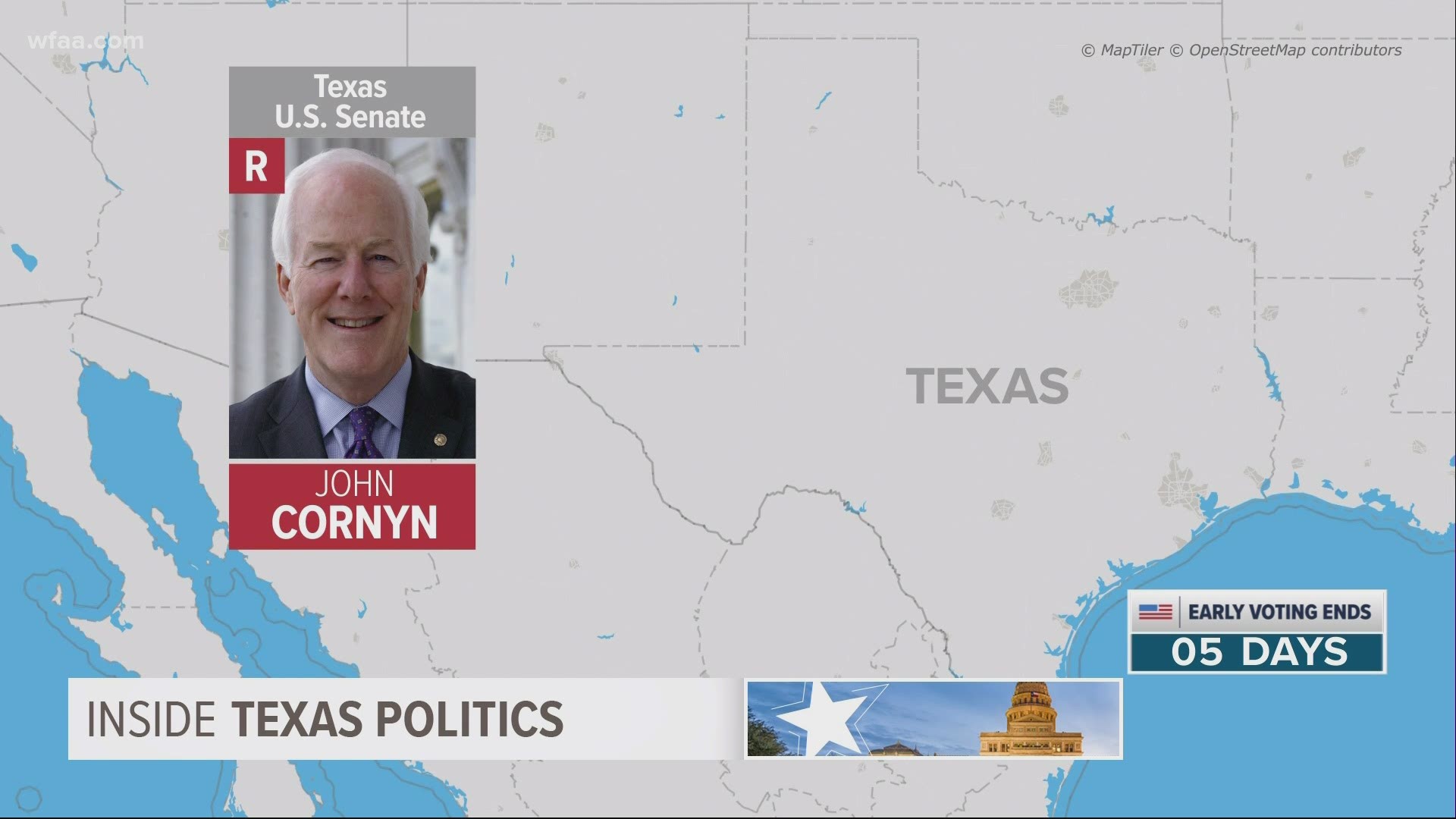 AUSTIN, Texas — Texas has already cast over 7 million votes, more than anywhere in America, and Glen Murdoch couldn’t get his ballot in fast enough after becoming a U.S. citizen this summer.

“I was champing at the bit,” said Murdoch, who moved to Austin from Australia shortly after President Donald Trump took office, and cast a ballot last week to vote him out.

It’s a rush to the polls in Texas like seldom seen before.

Ten days before Election Day, Texans have already cast as many early votes as they did in 2016 and are nearly 80% of the way toward hitting the total — both early and on Election Day — counted four years ago. The voting bonanza has some Democrats optimistic that decades of low turnout and undisputed Republican dominance may soon be a thing of the past.

But what that it all means for Texas is far from clear. Voters don’t register by party in the state, making it difficult to know which party or presidential candidate has an edge. Polls are unusually close in Texas, but neither President Donald Trump or Democrat Joe Biden has swung through Texas, focusing on clear battleground states instead like Arizona and Florida.

The striking numbers are across the board — in big cities that are solidly Democrat, in tipping-point suburbs where Republicans are losing ground and, to a lesser extent, in heavily Latino counties along the border. In Harris County, home to Houston, more than 1 million votes have already been cast.

Democrats have long believed a breakthrough was only a matter of rousing millions of nonvoters, particularly within the state’s booming Latino population. Roughly 50% of voters currently registered to vote in Texas have never voted or vote infrequently, according to the voter information firm L2.

A turnout surge could come with major political consequences. Democrats believe they have a shot at winning control of the statehouse, a half-dozen competitive U.S. House races and a Senate seat, not to mention 38 electoral votes that could seal the deal for Biden.

Republicans say Democrats are getting way ahead of themselves as usual, but are also clear-eyed that the final turnout will likely be historic.

Derek Ryan, a GOP data analyst, predicted this week that Texas turnout would likely surpass 12 million, or roughly 3 million more voters than 2016 — more than the population of neighboring New Mexico.

Republicans don’t buy it. In Austin’s fast-growing suburbs, Williamson County went for Trump by 9 percentage points four years ago. GOP county chairman Steve Armbruster said most of the county’s nearly 370,000 registered voters now have no recent primary history. He feels confident the GOP will win a good chunk of them.

“I haven’t seen any kind of support or excitement or enthusiasm on the Democrat side,” Armbuster said after returning from a local Trump rally Saturday.

The surge has unfolded at a moment when cases of the novel coronavirus, blamed for more than 17,000 deaths in Texas, are rising again and a wave of lawsuits over voting rules continue. Whereas the vast majority of states are allowing widespread mail-in voting because of coronavirus fears, Texas is only one of five that refused, choosing instead to expand early voting by one week. That extended period helps explain Texas’ huge numbers so far with still a week of early voting to go. With most voters ineligible to submit ballots by mail, the outcome in Texas may be revealed sooner than other states on Election Night.

“We know from 2018 there at least a half-million people that don’t mind switching back and forth between parties as they go down the ballot. And that’s a significant number,” said Steve Munisteri, a GOP strategist and adviser to Republican Sen. John Cornyn, who is in a close reelection battle against Democrat MJ Hegar.

More than 56 million voters have already cast their ballot across the country, and election experts are suggesting that as many as 150 million Americans may vote.

In Texas, the focus is on suburbs where Democrats made significant inroads in 2018. A major battleground is Collin County, outside Dallas, which has more than 1 million residents and backed Trump by 17 percentage points in 2016. Two years later, Democratic congressman Beto O’Rourke came within 5 percentage points of winning the booming county during his close but failed U.S. Senate run.

More than half of the county’s voters have already gone to the polls, the highest rate in Texas. The same is true in neighboring Denton County, another traditional GOP stronghold. On Saturday, Republican Gov. Greg Abbott made a second campaign swing this week through the North Texas area that will be decisive in whether Democrats claim a majority in the Texas House for the first time in 20 years.

RELATED: 'I voted for a guy named Trump,' the president says after casting ballot in Florida

In heavily Latino counties along the border, turnout has not been as high as elsewhere. In Hidalgo County, the percentage of registered voters who’ve already cast a ballot is slightly down from the same point four years ago.

In Houston, Bob Bailey cast his vote early for Trump with only the economy in mind. He hadn’t cut his shaggy hair in months, but what worried him most about the pandemic was his job at a gymnastics center. Half his co-workers — roughly two dozen people — have been laid off, and he said the business is only breaking even since reopening.

“My job, everybody’s job,” said Bailey, 60, ticking off his worries outside one of the more than 100 early voting centers around Houston, which is three times as many as a normal election year. “We’re not making a lot of money.”