The notion is seen as both exciting and worrisome as jobs become scarcer. 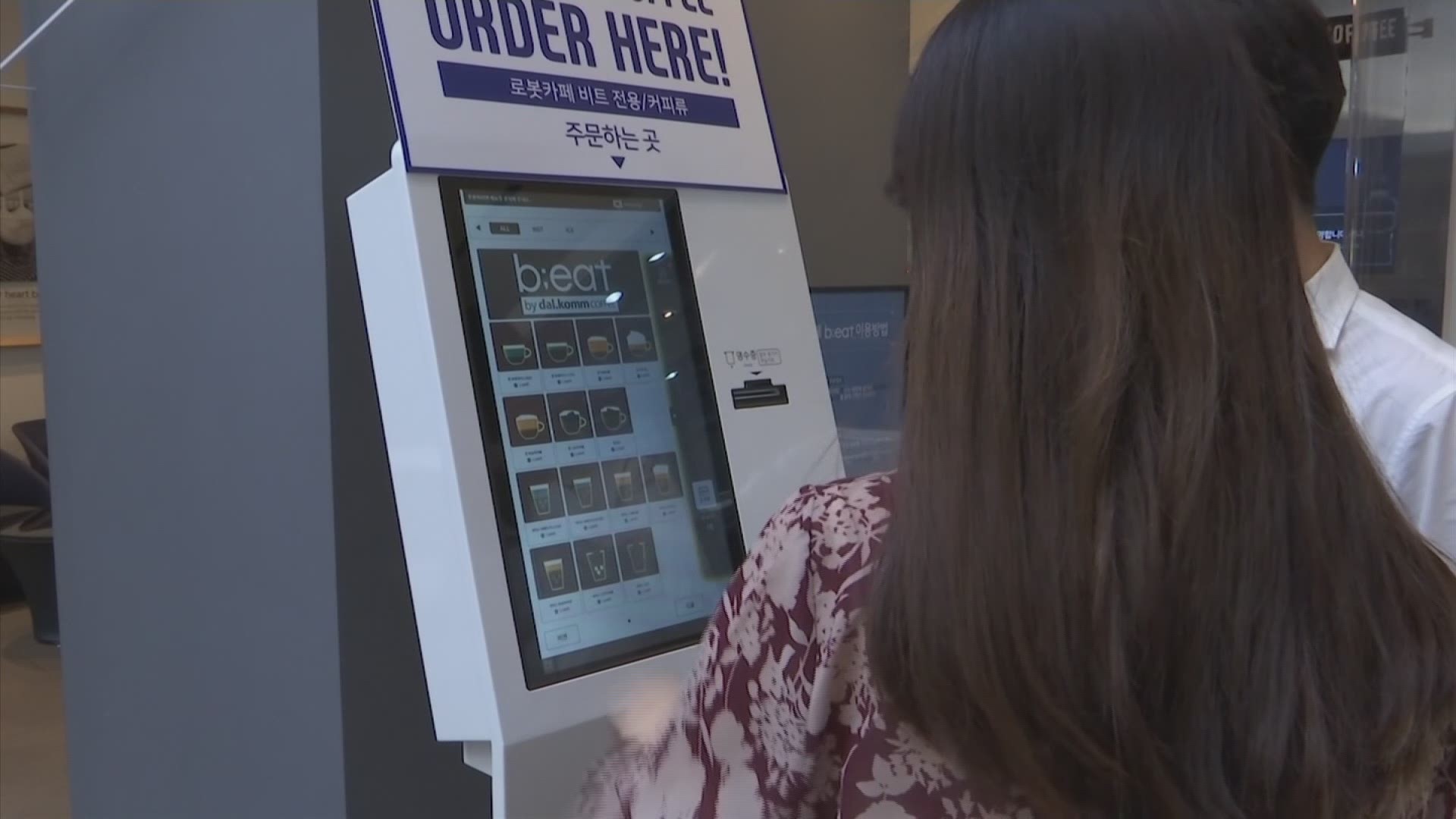 Dal.komm Coffee thinks so. The company now has 45 robot-equipped outlets in shopping malls, company cafeterias, schools and an airport.

Coffee is just one of many industries that could be transformed by automated services in this tech-forward nation, a notion both exciting and worrisome as jobs become scarcer.

South Korean industries, including restaurants, convenience stores, supermarkets, banks and manufacturers, are relying increasingly on robots and other automation. But not without consequence: Many Koreans, especially the young, are struggling to find work.

RELATED: Toyota built a robot that can shoot 3-pointers

At a Dal.komm Coffee shop in Seoul, a robot barista takes orders remotely through a mobile app or kiosk cashier and then brews fresh coffee.

Less than a minute later, the robot sends a 4-digit code the customer can use to open a pick-up box. The robot can handle up to 14 drinks at a time. Drinks not retrieved within 10 minutes are thrown away, but another drink can be ordered at no extra charge.

"It's really fun and convenient," said Choi Eun Jin, a 30-year-old office worker. "The area is crowded with office workers and local residents during lunchtime. So it's good to have a robot like this ... so you can get your coffee more easily."

South Korea's minimum wage has jumped by 27.3 percent over the last two years, adding to the incentive to cut labor costs by using automation, says Suh Yong Gu, dean of the Business School at Sookmyung Women's University in Seoul.

Officials also revised initial plans to completely automate all the nation's tollgates after complaints over losing 6,700 jobs. Instead, the system will be partially automated and keep all its current toll collectors.

South Korea has been an early and enthusiastic adopter of automation, with the highest density of industrial robots in the world in 2017, at 710 robots per 10,000 manufacturing workers, according to the International Federation of Robotics.

The global average was 85 robots per 10,000 employees, according to the group, an international industry non-profit that keeps track of data on robotics.

Despite worries over job losses, South Korea's food and retail businesses are replacing cashiers with automated kiosks. Fast-food chain Lotteria has kiosks in more than 800 of its 1,350 stores. KFC has installed digitized cashiers in all of its stores.

In 2017, South Korea's 5.5 trillion won ($4.7 billion) robot market was among the top five, along with China, Japan, the U.S. and Germany, which together accounted for over 70% of all robot sales.

It's a welcome trend for some younger people.

"Currently, Millennials — those who were born after 1980 — are prime consumers. This generation tends to not like meeting other people, so they favor ... technology that enables people to minimize face-to-face interactions with others," said Suh, the business school dean.

At a recently opened unmanned jeans store — LAB101 — in the trendy Seoul neighborhood of Hongdae a heavy iron door opens automatically when visitors swipe their credit cards in a machine beside the entrance.

The 24/7 denim shop lets customers try on jeans and pay using a self-service digital system without having to deal with sales staff, though sometimes technical glitches can pose a problem.

"I can freely look around and try on jeans as much as I like without being bothered," said Kim Kun Woo, 29.

Back at Dal.komm Coffee, a robot can brew 90 cups an hour and about 300 cups a day on a single charge of beans and supplies. The drinks cost $2 to $3.

Managers visit once a day on average to inspect and clean the robots. They also monitor them remotely through surveillance cameras and sensors.

While some customers like the convenience and novelty of robot coffee, some don't.

"Personally I prefer human baristas more because the robot can't customize drinks as delicately as humans can. I like weak coffee, but the robot is unable to control the strength of the coffee well," said a 30-year-old office worker, Lee Sang Jin, who visits the robot cafe occasionally.

There can also be delays when a robot is juggling a lot of orders, Lee said.

Later this year, the robot's developer says it plans to launch a faster and smarter version of the robot cafe that will be able to recognize voices and customer movements and offer personalized menu suggestions.