Rayshard Brooks was killed after an officer-involved shooting on June 12. 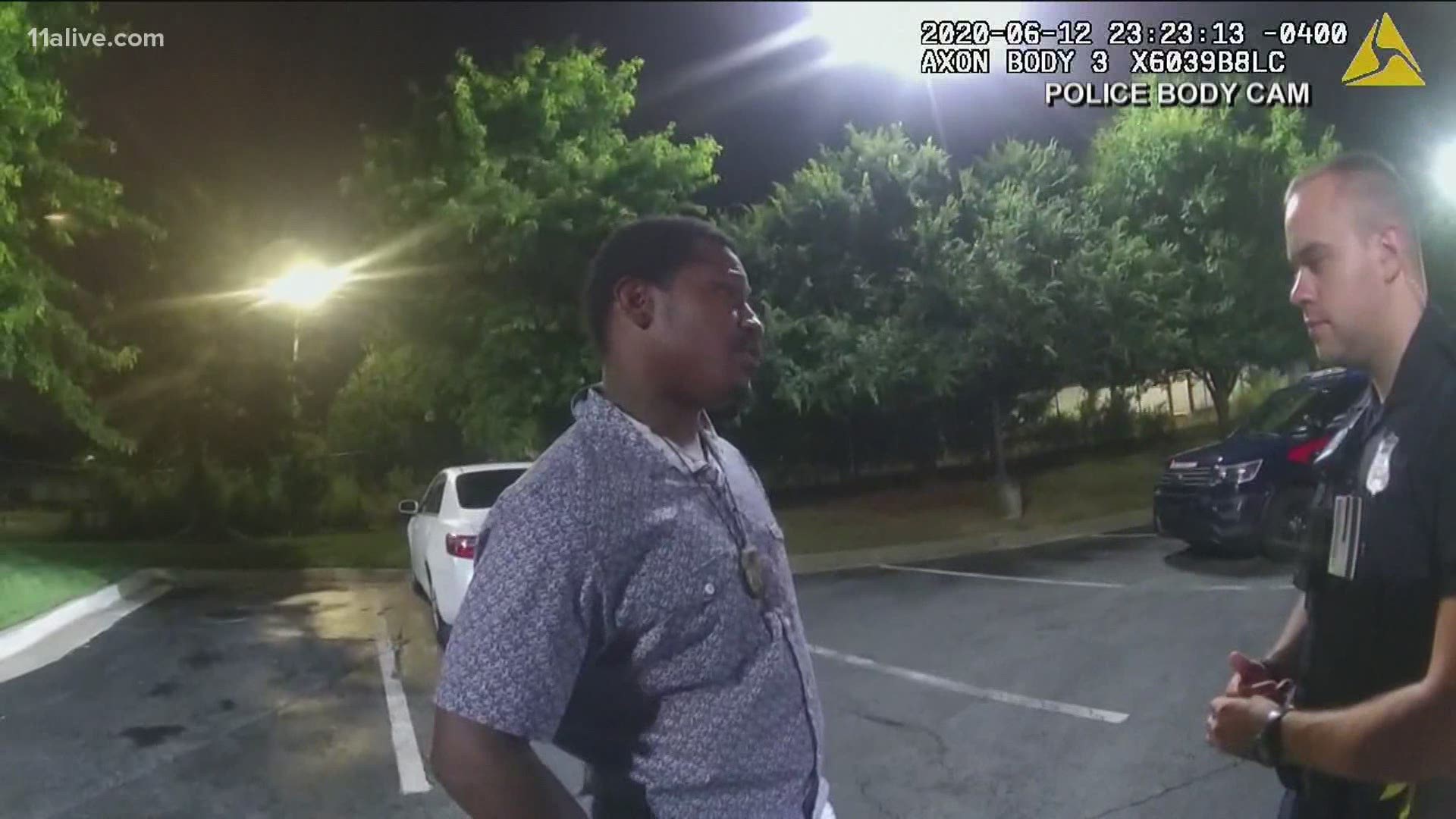 ATLANTA — Fulton County District Attorney Paul Howard announced that warrants have been issued in the fatal shooting of Rayshard Brooks.

Now former Atlanta police officer Garrett Rolfe, who fired his service weapon at Brooks, will be charged with felony murder, among the 10 other charges. He faces up to life in prison or the death penalty if convicted on the felony murder charge.

The other charges include multiple counts of aggravated assault with a deadly weapon, criminal damage and multiple charges for violations of oath of office.

Howard said Rolfe kicked Brooks while he lay on the ground and that the officer with him, Devin Brosnan, stood on Brooks' shoulder as he struggled for life Friday night.

Brosnan faces four charges*, including aggravated assault for standing on Brooks' shoulder. The other three charges relate to violations of oath for standing on the shoulder and for failing to render timely medical aid. He faces one to 20 years in prison.

"Mr. Brooks never presented himself as a threat," Howard said.

"The decision to initiate charges by the Fulton County DA’s office is irrational and obviously based on factors which should have nothing to do with the proper administration of justice," a statement from Brosnan's attorney said. "This was not a rush to judgment. This was a rush to misjudgment."

Rolfe's attorney, in a statement, said: "Officer Rolfe is well known to the courts and there is no compelling reason to bring any charges against them before the GBI has completed its investigation and published its findings."

In a statement, the Georgia Bureau of Investigation said it was not aware of Howard's plan to announce charges.

"We are in the process of conducting this investigation. Although we have made significant progress in the case, we have not completed our work. Our goal in every officer involved shooting case we are requested to review, is to complete a thorough, impartial investigation before we submit the file to the respective District Attorney’s Office," the statement said. "The GBI was not aware of today’s press conference before it was conducted. We were not consulted on the charges filed by the District Attorney. Despite today’s occurrence, the GBI will complete its mission of completing an impartial and thorough investigation of this incident."

Later in an interview with 11Alive, one of Brosnan's attorneys, Amanda Clark Palmer, said they are stunned that her client is facing charges. She said her client also suffered a concussion during the encounter.

Howard presented photographs from the night of the shooting and pointed out the angles and the distance of Brooks from the officers at the time the shots were fired.

He said after Brooks was shot, Rolfe stated "I got him."

Howard said Rolfe was aware that once the Taser is fired twice, which he said it was, it becomes inoperable.

Howard said the warrants have been signed and he is asking the officers to surrender by 6 p.m. on Thursday.

By law in Georgia, a grand jury must now convene and determine if it will indict the officers. But, due to the pandemic, no grand juries can meet until at least October. The D.A. wants the ability to move forward without an indictment.

Howard said this is the 40th case prosecuted against officers in Fulton County. Nine were fatal.

Brooks' widow Tomika Miller, along with family attorneys L. Chris Stewart and Justin Miller addressed the media after the announcement of the charges. They said this isn't a celebration and nobody is happy -- because the death of Brooks should have never happened.

Atlanta Mayor Keisha Lance Bottoms provided a statement in regards to the charges to 11Alive that read:

DETAILS ABOUT THE RAYSHARD BROOKS CASE

Rolfe and Brosnan responded to a DUI call at the Wendy's off University Avenue where Brooks was asleep in the drive-thru line on June 12. After Rolfe and officer Brosnan began the DUI investigation, a violent struggle ensued.

It ended with Rolfe shooting Brooks twice in the back as he was running away with the officer's taser, according to the Georgia Bureau of Investigation.

Less than 24 hours after the incident, the department fired Rolfe and put Brosnan on administrative duty.

The GBI said it was unaware of the District Attorney's intention to bring charges before today's announcement. Despite that, the agency said it would continue to investigate the case before handing it off to the DA's office.

1 / 18
AP
A person looks back as officials move closer during protests Saturday, June 13, 2020, near the Atlanta Wendy's where Rayshard Brooks was shot and killed by police Friday evening following a struggle in the restaurant's drive-thru line in Atlanta. (AP Photo/Brynn Anderson)

Rolfe joined the force as an academy cadet in 2013 and has received more than 2,000 hours of training since then, according to state records.

Rolfe had been recently trained in de-escalation tactics, according to his department record. In addition, he took coursework in April in cultural awareness. This past January, he passed a course entitled "Use of Deadly Force." In May 2019, Rolfe was congratulated by the police department for his participation in the High-Intensity Traffic Team Unit.

The unit works to reduce the number of traffic-related injuries and deaths in the city, especially for those involving impaired drivers. Rolfe was awarded a silver pin for making between 50 and 99 DUI arrests during the year prior to the award.

*Editor's note: A previous version of this story said that Brosnan faced three charges, based on statements made by the DA during Wednesday's announcement. Court records and warrants show that he faces four counts total. This story has been updated to reflect that.

Many persons of interest in Wendy's arson during Atlanta protest

What do we know about Garrett Rolfe?

After restaurant goes up in flames during protest for Rayshard Brooks, Wendy's CEO speaks out