Diana's 1997 visit is still very much discussed today in Angola after people there were struck by her warmth. 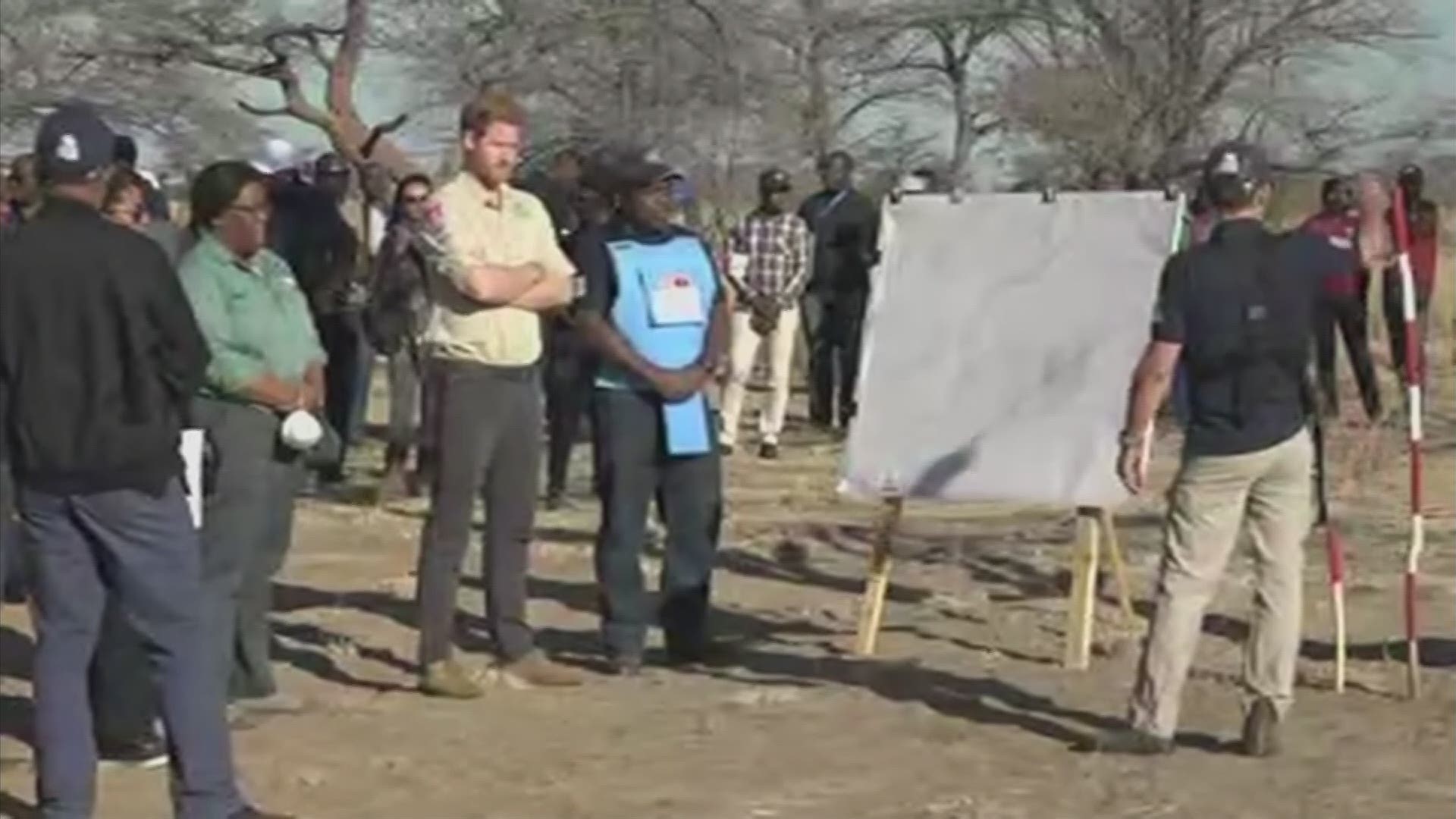 JOHANNESBURG — A body armor-wearing Prince Harry on Friday followed in the footsteps of his late mother, Princess Diana, whose walk through an active mine field in Angola years ago helped to lead to a global ban on the deadly weapons.

The prince walked through a dusty mine field marked with skull-and-crossbones warning signs, and was visiting the spot where Diana was famously photographed on a similar walk during her own Africa visit in 1997. That field in Huambo is now a busy street. The southern African nation is now years past a grinding civil war and hopes to be land mine-free by 2025, a goal of scores of countries around the world.

"Land mines are an unhealed scar of war," Harry said in the town of Dirico. "By clearing the land mines we can help this community find peace, and with peace comes opportunity."

Diana's visit is still very much discussed today in Huambo after people were struck by her warmth and willingness to acknowledge their country's devastating 27-year conflict, the Angola country director for mine-clearing organization The HALO Trust said.

"The main impact of Diana's walk in 1997 was the level of global exposure it provided for land mines not only in Angola but the world," Ralph Legg said. She was a great advocate for a land mine ban, and "her willingness to visit an actual mine field, to place herself right in that context, provided great impetus and gave it a great boost."

The international ban on anti-personnel mines was signed that year and entered into force two years later. So far 164 countries have signed on. "More than 48 million stockpiled mines have been destroyed and 31 countries have been completely cleared of land mines," The HALO Trust said, while production of the weapons has almost dried up.

Harry on his visit also remotely detonated a decades-old mine, met with mine-clearing teams and was visiting the orthopedic hospital his mother visited for her meetings with mine victims.

"I think that will be a very poignant moment of coming full circle," Legg said. "Very striking once people compare those images from the two visits to see how far Angola has come."

The world, however, is hardly free of mines, and Legg said Angola itself still has about 650 mine fields left to clear. Some countries that remain heavily mined include Afghanistan, Syria, Ukraine and Yemen, and Afghanistan led the world with at least 2,300 casualties in 2017, according to the Landmine Monitor 2018 report.

"Myanmar was the only known instance of government forces actively planting the weapons" in the year-long period between October 2017 and 2018, the report said.

Angola now hopes to turn some of its mine-free areas into sites for wildlife conservation and ecotourism. The prince was unveiling a project meant to protect wildlife corridors near the sprawling Okavango Delta, a rare inland delta in neighboring Botswana that doesn't flow into a sea or ocean and is home to several endangered species.

Harry called on for international effort to help clear mines from the Okavango watershed in Angola. "Everyone who recognizes the priceless importance of safeguarding Africa's most intact natural landscape should commit fully to this mission," he said.

His first official family tour with his wife, Meghan, the Duchess of Sussex, and their baby, Archie, will continue with stops in Malawi and further events in South Africa with a focus on issues including mental health and women's empowerment.