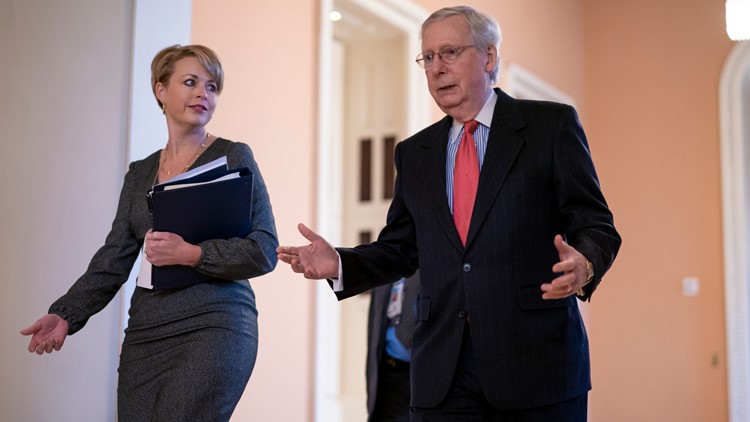 Photo by: AP
Senate Majority Leader Mitch McConnell, R-Ky., walks to the chamber as defense arguments by the Republicans resume in the impeachment trial of President Donald Trump on charges of abuse of power and obstruction of Congress, at the Capitol in Washington, Tuesday, Jan. 28, 2020. (AP Photo/J. Scott Applewhite)

According to multiple reports, including one from the Washington Post, the Senate Majority Leader Mitch McConnell from Kentucky said in a closed-door meeting that he does not have enough votes to knock down an effort to call more witnesses and evidence in the Senate impeachment trial of Donald J. Trump.

This week, excerpts of a manuscript by former national security adviser John Bolton were released stating that President Trump directly tied the withholding of almost $400 million in military aid to Ukraine, to requested investigations of former vice president Joe Biden and his son Hunter Biden.

As the Associated Press reports, Republicans familiar with the closed-door meeting of GOP senators said the meeting began not long after closing arguments were made Tuesday by Trump's legal team. McConnell reportedly faces a number of potential defections in the party.

51 votes are needed before a decision to call more witnesses would happen. Republicans hold a 53-seat majority in the Senate.