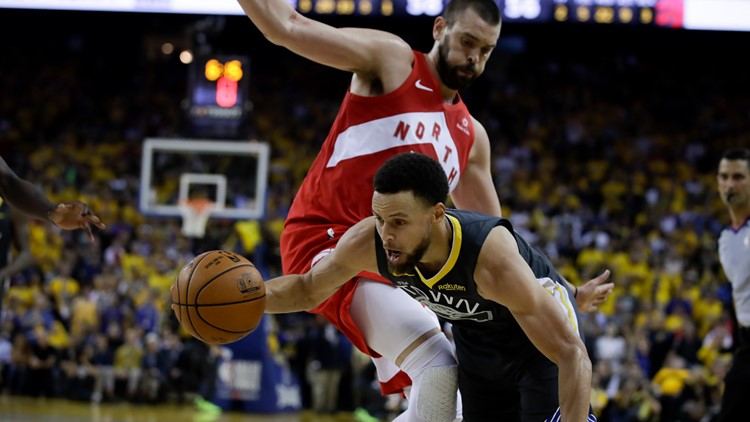 OAKLAND, Calif. — Kawhi Leonard's hot hand is sending the Raptors home to Toronto on the cusp of a startling upset for Canada.

Leonard outdueled the Splash Brothers for 36 points and 12 rebounds, and the Raptors moved within a victory of the franchise's first championship by winning a second straight game on Golden State's home floor, beating the Warriors 105-92 on Friday night for a 3-1 lead in the NBA Finals.

Not that the Raptors are ready to celebrate yet.

Klay Thompson made a strong return after missing Game 3 with a strained left hamstring and scored 28 points with six 3-pointers in what might have been the final game after 47 seasons at Oracle Arena before the team's move to new Chase Center in San Francisco next season. Stephen Curry added 27 points but shot just 9 for 22 and 2 of 9 from 3-point range on the heels of his postseason career-best 47-point outing in a 123-109 Game 3 defeat.

Serge Ibaka scored 20 points on 9-of-12 shooting in 22 minutes off the bench for the composed and confident Raptors, who for a second straight game found an answer to every Warriors threat at raucous Oracle — where home fans were stunned and silenced when the final buzzer sounded.

A huge section of Toronto fans then broke into singing "O Canada!"

"It's awesome," Raptors coach Nick Nurse said. "Our fans travel really well in the regular season. We get this a lot on the road. It's really amazing. It's Canada's team, and Canadians from all over the country are traveling down and making plans when we play in Florida or California or Detroit especially."

The two-time defending champions' quest for a three-peat is suddenly in serious jeopardy.

Toronto will take its first try at the title in Game 5 on Monday night back at Scotiabank Arena. Golden State, still hopeful of injured star Kevin Durant's return, will try to force one more at Oracle next Thursday.

"It's not over. It's not a good feeling right now, obviously," Curry said. "We've been on both sides of it and for us it's an opportunity to flip this whole series on its head."

In 2017, Leonard's postseason with San Antonio got cut short against the Warriors in Game 1 of the Western Conference finals after he re-injured his troublesome left ankle when Zaza Pachulia's foot slid under his.

Dominant in his first postseason since, Leonard knocked down two jumpers in the final 42 seconds of the third to put the Raptors up 79-64. Fred VanVleet then dealt another dagger on the first possession of the fourth with a 30-footer.

A bloodied VanVleet then went to the locker room with 9:35 left after being hit in the face by Shaun Livingston's left elbow when the Warriors guard went up for a shot and VanVleet was just behind him. Replays showed a tooth in the middle of the key even after play resumed.

These poised Raptors kept level heads again after falling behind by 11 points in the first half. Pascal Siakam scored 19 for Toronto.

Two days earlier, Kyle Lowry was praised for staying calm when shoved on the sideline by Warriors minority owner Mark Stevens, who received a one-year ban by the team and NBA along with a $500,000 fine for the incident.

Now, the Raptors as first-time finalists and in their 24th year of existence can bring Canada its first NBA championship.

The Warriors, the only team to blow a 3-1 lead in the NBA Finals, are confident they can overcome that deficit.

"I've been on the wrong side of 3-1 before. Why not make our own history?" Golden State's Draymond Green said.

Toronto outscored Golden State 37-21 in the decisive third, a complete reverse of the Warriors' dominance after halftime with an 18-0 run in the Game 2 victory.

Warriors coach Steve Kerr challenged his team to do a better job defensively and Golden State did so early but couldn't handle Toronto's depth.

Kevon Looney, a key backup big man, scored 10 points for the Warriors after it was initially believed he would be out the remainder of the series because of fractured cartilage near his right collarbone. He was hurt in the first half of Game 2.

Looney drew huge applause as he checked into the game at the 6:45 mark of the first.

Danny Green, who hit six 3s in Game 3, began 0 for 6 with five missed 3s before finally connecting from deep midway through the fourth. His 48th 3-pointer in the finals tied him with Kobe Bryant and Derek Fisher for seventh place on the NBA list.

Warriors: The Warriors' streak this year of 19 straight postseason games scoring 100 points ended. It was 25 dating to last season's run. ... Golden State fell to 4-2 this postseason in games following a loss. ... Livingston played in his 100th career playoff game with the Warriors, the fifth in team history to reach the mark. ... The Warriors held a closed pregame shootaround 2 1/2 hours before game time.

Hall of Famer Al Attles, the Warriors' former general manager, coach and player, attended Game 4 . It was the first game in approximately eight months for the 82-year-old Attles, who has had health issues.

Durant missed his ninth straight game since the injury May 8 in Game 5 of the Western Conference semifinals against the Rockets.

Kerr is done providing every detail and step of Durant's rehab progress.

"We're hoping he can play Game 5 or 6. And everything in between I've decided I'm not sharing because it's just gone haywire," Kerr said. "There's so much going on, and so it doesn't make sense to continue to talk about it. He's either going to play or he's not. So tonight he's not playing."