Ancient Gilgamesh tablet bought by Hobby Lobby must go back to Iraq, US prosecutors say

The allegedly stolen tablet was sold at auction to Hobby Lobby in 2014. Prosecutors say the retailer was given false information about its origin. 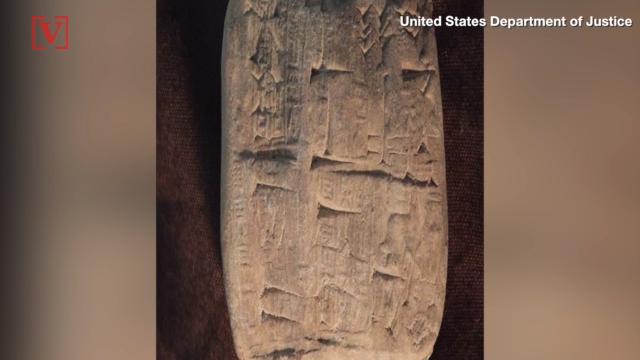 Editor's note: The video above is from May 2018

Federal prosecutors say a 3,500-year-old, encrusted cuneiform tablet known as the "Gilgamesh Dream Tablet" that was purchased at auction by Hobby Lobby is stolen and must be returned to Iraq. Prosecutors say false information about its origin had spread before the sale.

The Department of Justice says the tablet contains a Sumerian epic poem circa 1,400 B.C., that is considered one of the world's oldest works of literature.

"After the tablet was imported and cleaned, experts in cuneiform recognized it as a portion of the Gilgamesh epic in which the protagonist describes his dreams to his mother (hence, the 'Gilgamesh Dream Tablet')," DOJ said in a statement. "The protagonist’s mother interprets the dreams as foretelling the arrival of a new friend.  She tells her son, “You will see him and your heart will laugh.”

The work originated in an area that is now modern-day Iraq and somehow made it to the United States against federal law, DOJ said. Federal investigators determined the tablet was sold to a U.S. antiques dealer from a Middle Eastern antiques dealer in London. The DOJ claims the U.S. dealer sold the tablet with a letter falsely claiming it had been inside a box of miscellaneous bronze fragments bought at auction in 1981.

An auction house, which eventually obtained the tablet, was allegedly told by the U.S. dealer that the story of the tablet's history would not stand up to scrutiny, according to DOJ. Nevertheless, the unnamed auction house allegedly stuck with the narrative that the tablet was sold at a 1981 auction.

Hobby Lobby bought the tablet in 2014 for $1.67 million, according to court documents. The arts-and-crafts store intended it for display at the Museum of the Bible, which DOJ said cooperated in the probe.

DOJ said that the auction house withheld information as to the tablet's origin and the antique dealer's name despite requests from Hobby Lobby and the museum. Law enforcement seized the tablet in September 2019.

“Whenever looted cultural property is found in this country, the United States government will do all it can to preserve heritage by returning such artifacts where they belong,” said Richard P. Donoghue, U.S. Attorney for the Eastern District of New York.

Hobby Lobby was fined $3 million in 2017 for failing to conduct due diligence after being accused of buying thousands of artifacts that had been smuggled out of Iraq, according to NPR.

RELATED: Museum of the Bible says 5 of their Dead Sea Scrolls fragments are fake