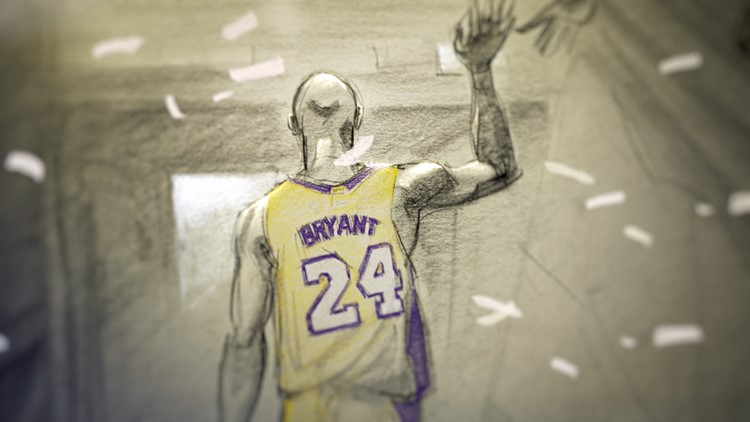 The Oscar-winning animated short 'Dear Basketball' was based on the poem Kobe Bryant wrote to announce his retirement.
Author: Suzanne Nuyen (TEGNA)
Published: 10:51 AM CST January 27, 2020
Updated: 8:27 AM CST February 2, 2020

Kobe Bryant will be remembered as one of the best to ever play basketball, but his influence expanded well beyond the court and into the entertainment industry.

Bryant, who died Sunday in a helicopter crash along with his 13-year-old daughter Giana, became the first professional athlete to win an Academy Award for his work on the animated short film, "Dear Basketball."

The film was based on a poem Bryant wrote of the same name for "The Players' Tribune." The poem illustrated his love of the sport from an early age and also announced his retirement.

The film was written and narrated by Bryant. Glen Keane directed an animated. The score was composed by John Williams.

In his Oscar speech, Kobe thanked his family, calling them his "inspiration."

“As basketball players, we’re supposed to just shut up and dribble,” he said. “I am glad we did a little more than that. Thank you Academy for this amazing honor. Thank you Verizon for believing in the film. Thank you John Williams for such a wonderful piece of music. Thank you Molly Carter, without you we wouldn’t be here.”

“To my wife, Vanessa , our daughters Natalia, Gianna, Bianka, “Ti amo con tutto il cuore. I Love you with all my heart,” Kobe closed. “You are my inspiration.”

Keane reflected on working with Bryant after news of his death, calling the film "one of the high points" of his career. “Kobe was the most passionate man who was led by his heart and his intellect," he told the New York Times.

"He was a great thinker with an insatiable hunger for learning: As soon as he stepped into animation, he eagerly began soaking up every aspect of it. Working with him was a dream and one of the high points of my career.”

Bryant did have some off-court controversy. He was accused of sexual assault in Colorado in 2003 before the criminal case was dropped the next year.

RELATED: 'Tonight is for Kobe' | Grammys begin with emotional tribute to Kobe Bryant