The COVID-19 bill with $1,400 checks, expanded jobless benefits and more child tax credit money will now be sent to President Biden for his signature. 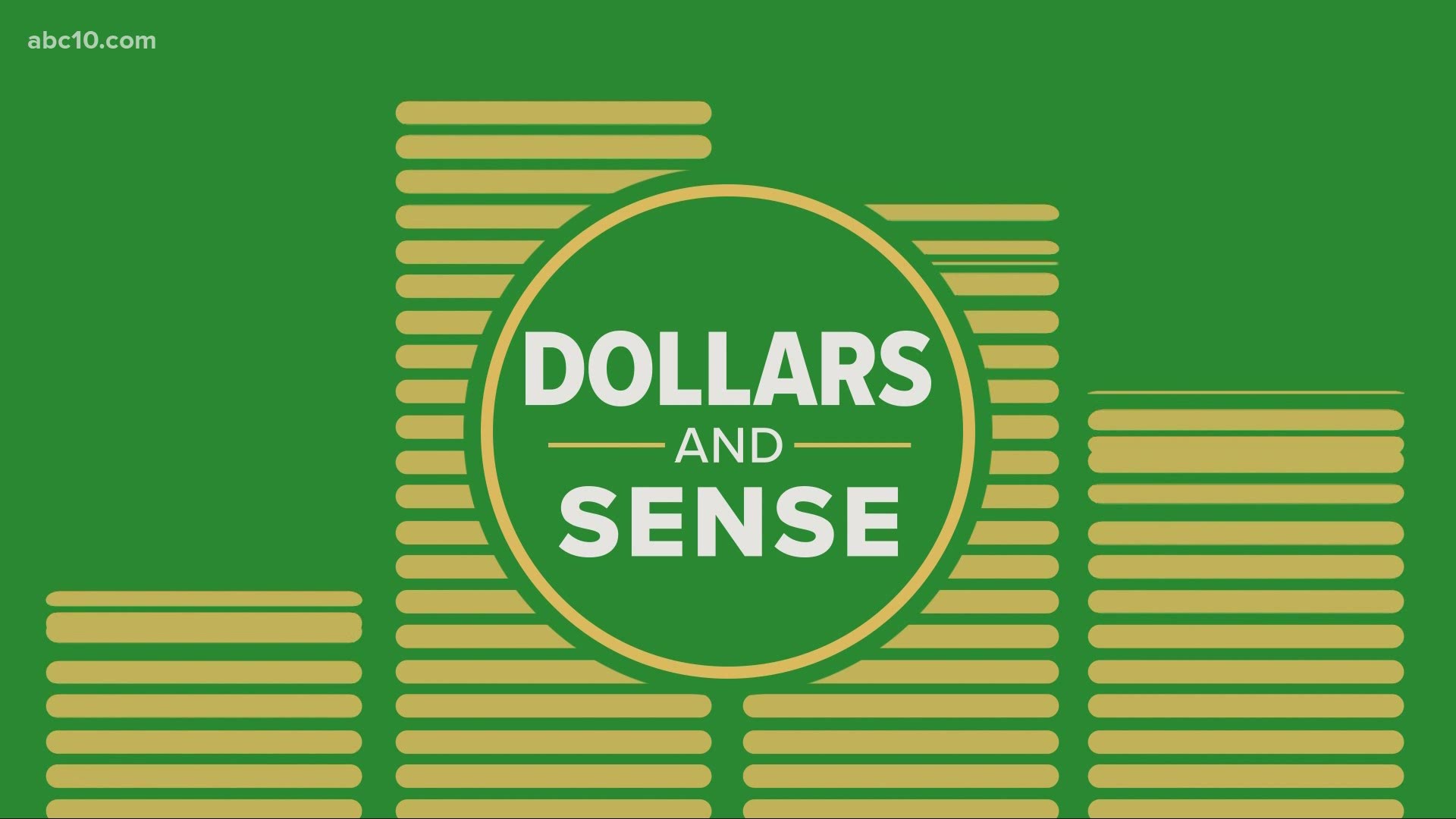 WASHINGTON — A Congress riven along party lines approved a landmark $1.9 trillion COVID-19 relief bill Wednesday, as President Joe Biden and Democrats claimed a triumph on a bill that marshals the government’s spending might against twin pandemic and economic crises that have upended a nation.

The House gave final congressional approval to the sweeping package by a near party line 220-211 vote precisely seven weeks after Biden entered the White House and four days after the Senate passed the bill without a single Republican vote. GOP lawmakers opposed the package as bloated, crammed with liberal policies and heedless of signs the crises are easing.

Most noticeable to many Americans are provisions to provide up to $1,400 direct payments this year to most adults and extend $300 per week emergency unemployment benefits into early September. But the legislation goes far beyond that.

The measure addresses Democrats' campaign promises and Biden's top initial priority of easing a one-two punch that first hit the country a year ago. Since then, many Americans have been relegated to hermit-like lifestyles in their homes to avoid a disease that's killed over 525,000 people — about the population of Wichita, Kansas — and plunged the economy to its deepest depths since the Great Depression.

“Today we have a decision to make of tremendous consequence,” said House Speaker Nancy Pelosi, D-Calif., “a decision that will make a difference for millions of Americans, saving lives and livelihoods.”

For Biden and Democrats, the bill is essentially a canvas on which they've painted their core beliefs — that government programs can be a benefit, not a bane, to millions of people and that spending huge sums on such efforts can be a cure, not a curse. The measure so closely tracks Democrats' priorities that several rank it with the top achievements of their careers, and despite their slender congressional majorities there was never real suspense over its fate.

RELATED: VERIFY: Most of the COVID relief bill is directed toward COVID-related things

They were also empowered by three dynamics: their unfettered control of the White House and Congress, polls showing robust support for Biden's approach, and a moment when most voters care little that the national debt is soaring toward a stratospheric $22 trillion. Neither party seems much troubled by surging red ink, either, except when the other is using it to finance its priorities, be they Democratic spending or GOP tax cuts.

A dominant feature of the bill is initiatives making it one of the biggest federal thrusts in years to assist lower- and middle-income families. Included are expanded tax credits over the next year for children, child care and family leave plus spending for renters, feeding programs and people's utility bills.

The measure provides up to $1,400 direct payments to most Americans, extended emergency unemployment benefits and hundreds of billions for COVID-19 vaccines and treatments, schools, state and local governments and ailing industries from airlines to concert halls. There is aid for farmers of color and pension systems, and subsidies for consumers buying health insurance and states expanding Medicaid coverage for lower earners.

CALCULATOR: Here is a tool from Omni Calculator that may help you determine how much you might receive

Its very expansiveness is a chief GOP talking point.

“It's not focused on COVID relief. It's focused on pushing more of the far-left agenda," said No. 2 House GOP leader Steve Scalise of Louisiana.

The Associated Press-NORC Center for Public Affairs Research poll found last week that 70% of Americans back Biden’s response to the virus, including a hefty 44% of Republicans. 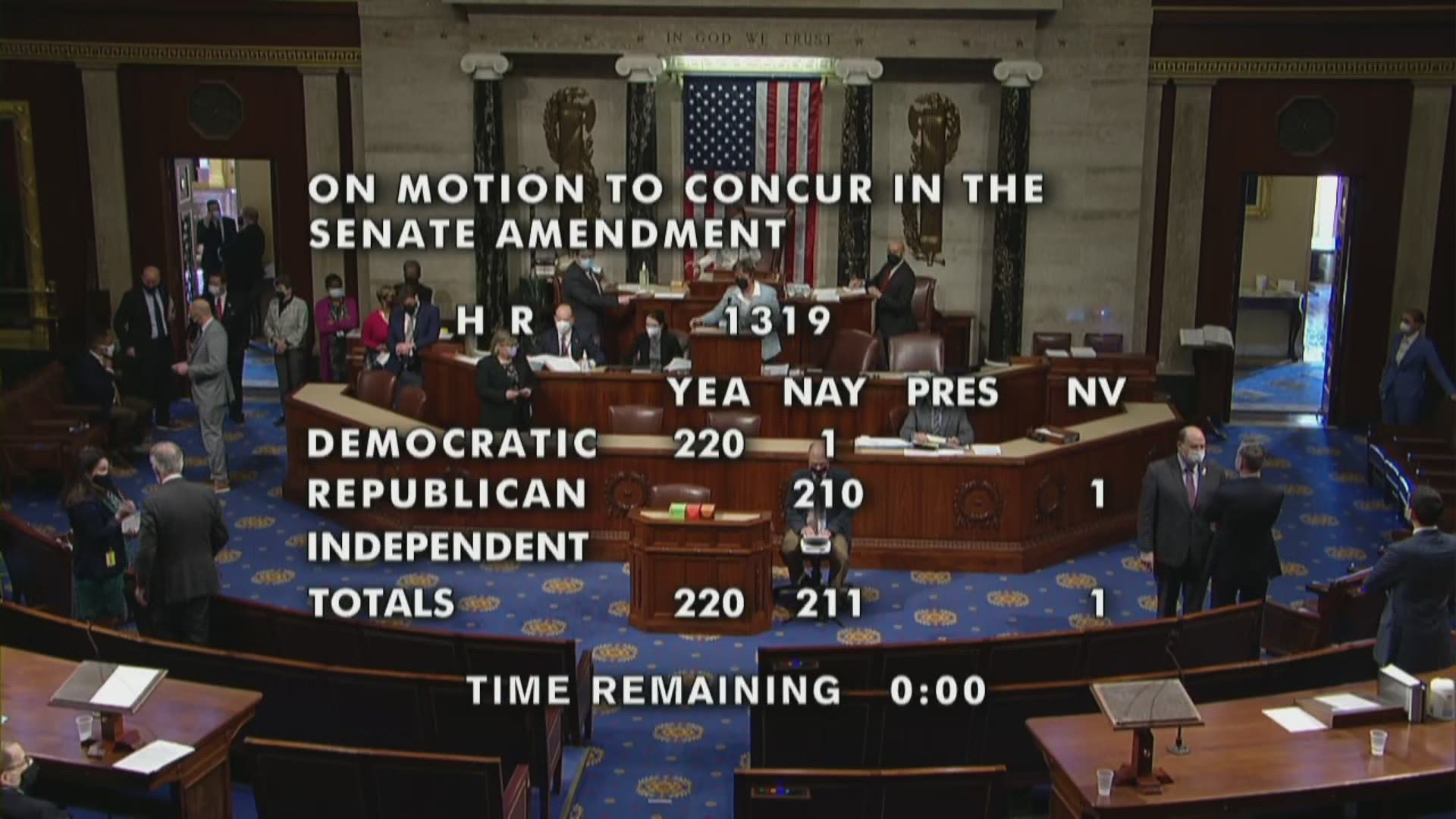 Yet the bill's pathway has underscored Democrats' challenges as they seek to build a legislative record to persuade voters to keep them running Congress in next year's elections.

Democrats control the Senate, split 50-50, only because Vice President Kamala Harris gives them the winning vote in tied roll calls. They have just a 10-vote advantage in the House.

Progressives had to swallow big concessions in the bill to solidify moderate support. The most painful was dropping the House-approved federal minimum-wage increase to $15 hourly by 2025.

Moderates forced tightened eligibility for the $1,400 stimulus checks, now phased out completely for individuals earning $80,000 and couples making $160,000. The House's initial extension of the soon-to-end $400 weekly emergency jobless payments, paid on top of state benefits, was trimmed by the Senate to $300 and will now halt in early September.

Manchin was a leading holdout and in the middle of talks that resulted in curbing all of those initiatives. The Senate approved the bill on a party-line 50-49 vote on Saturday.

The independent Tax Policy Center said that the Senate-passed bill would give almost 70% of this year's tax breaks to households earning $91,000 or less. In contrast, the Trump-era GOP tax bill gave nearly half its 2018 reductions to the top 5% of households earning around $308,000, said the research center, which is run by the liberal-leaning Urban Institute and Brookings Institution.

Yet keeping Democrats united won't get easier as the party tries advancing the rest of its agenda. There are fault lines within the party over priorities like immigration, health care and taxes.

At some point it seems likely that progressives will draw their own lines in the sand. They are already demanding that the party revisit the minimum-wage boost, and amid all this Republicans are already demonstrating they are ready to pounce.

The bill passed the Senate under budget rules that prevented Republicans from launching filibusters, which require 60 votes for most measures. That process won't be available for much legislation moving forward, but either way any Democratic Senate defections will make most bills there non-starters.

Even with their procedural advantage, Democrats' avenue to victory in the Senate was pockmarked with delays. Sen. Ron Johnson, R-Wis., forced clerks to spend nearly 11 hours reading the entire 628-page bill; negotiations with Manchin over jobless benefits lasted around nine hours; and votes on three dozen amendments, virtually all fated in advance to lose, took about 12 hours more.

When will the third stimulus check be sent?

Democrats and Biden want to have the COVID-19 relief plan approved by this Sunday, March 14. That's when extra unemployment assistance and other pandemic aid expires. Presuming the bill is passed Wednesday and signed right away, then it will get done four days ahead of that mark.

During the first round of stimulus checks in April 2020, it took about two weeks for the federal government to start distributing the money. It took around one week for the second round of checks, worth $600, in early January, since the infrastructure was already in place from the first round.

If the IRS is able to keep with previous timelines, Americans could start receiving stimulus checks from late March to early April. For example, if the stimulus package is signed into law on Wednesday, based on previous relief plans, the first direct deposits may go out mid-to-late next week.

One possible complicating factor is that this round of stimulus checks will be going out while the IRS is dealing with incoming tax returns. But it's unclear how big of an impact that could make on stimulus checks going out.