The GOP will control redistricting in 20 states accounting for 187 U.S. House seats, including the growing states of Texas, Florida, Georgia and North Carolina. 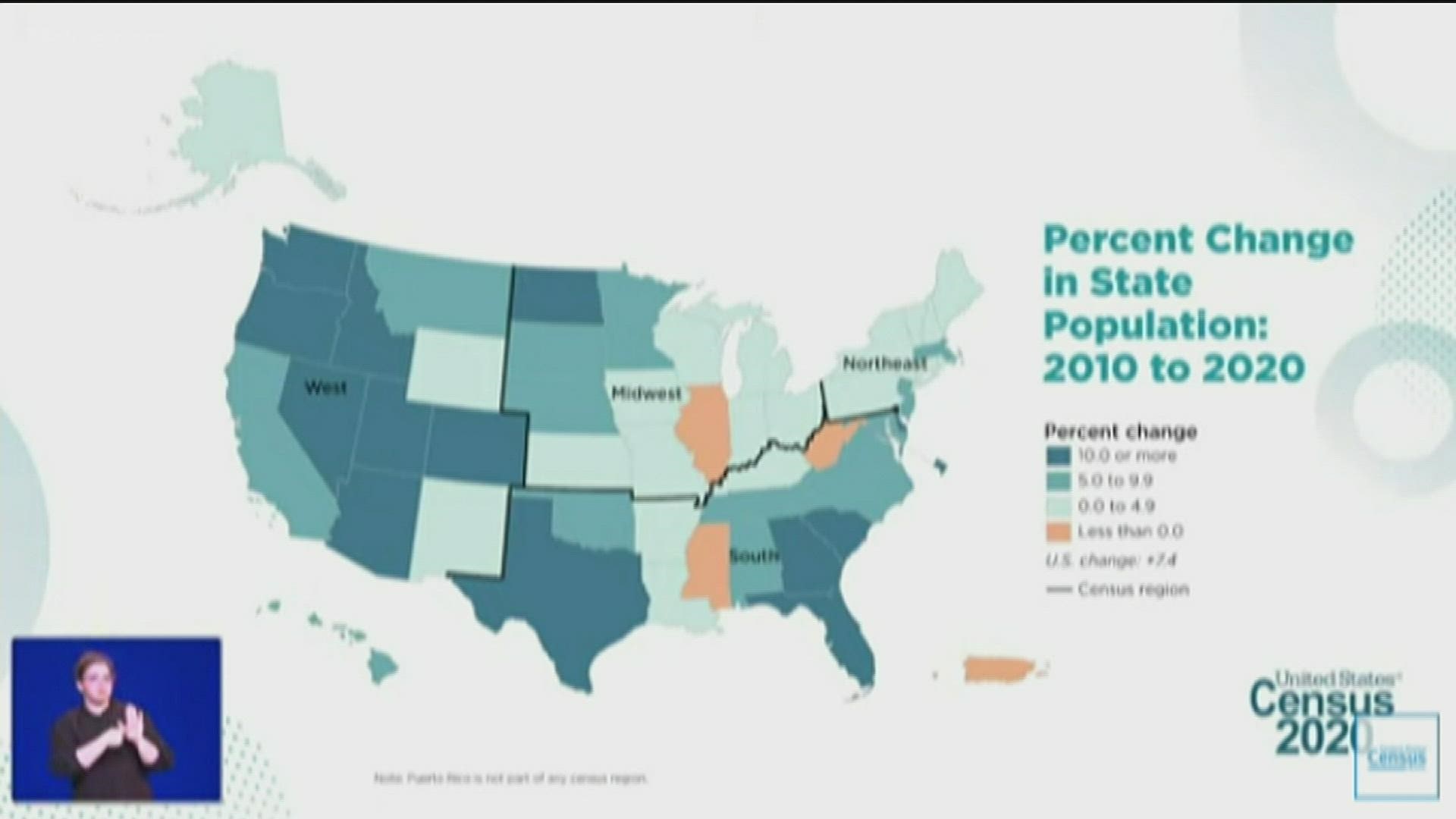 The once-a-decade battle over redistricting is set to be a showdown over the suburbs, as new census data showed rapid growth around some of the nation's largest cities and shrinking population in many rural counties.

From Texas to Florida, some of the biggest gains reported Thursday came in states where Republicans will control the redistricting process, but often in and around cities where Democrats have been faring well in recent elections.

The new detailed population data from the 2020 census will serve as the building block to redraw 429 U.S. House districts in 44 states and 7,383 state legislative districts across the U.S. The official goal is to ensure each district has roughly the same number of people.

But many Republicans and Democrats also will be trying to ensure the new lines divide and combine voters in ways that make it more likely for their party's candidates to win future elections, a process called gerrymandering. The parties' successes in that effort could determine whether taxes and spending grow, climate-change polices are approved or access to abortion is expanded or curtailed.

Republicans need to gain just five seats to take control of the U.S. House in the 2022 elections — a margin that could potentially be covered through artful redistricting. As they did after the 2010 census, Republicans will hold greater sway in more states over the redistricting process.

"The question is going to be how creative this new data will force Republicans to get in maintaining or expanding their advantages, given an increasingly diverse, increasingly urban population,” said Joshua Blank, research director of the Texas Politics Project at the University of Texas.

Texas will be a major focal point in redistricting.

The Census Bureau said five of the 14 U.S. cities that grew by at least 100,000 people are located in Texas — Austin, Dallas, Fort Worth, Houston and San Antonio. Four of the nation’s 10 fastest growing cities also were Texas suburbs — Frisco and McKinney near Dallas; Conroe near Houston, and New Braunfels near San Antonio. All are prime battle grounds for redistricting.

By contrast, many Texas counties outside of its metropolitan areas saw populations decline, the Census Bureau said.

Republicans, who currently hold 23 of the 36 U.S. House seats in Texas, will have full control over the redistricting process, allowing them to decide where to draw the two new seats the state is gaining. But that could be complicated because Democrats generally have fared better in Texas suburbs in recent elections.

Though Republican Donald Trump carried Texas by more than 6 percentage points in the 2020 presidential election, he and Democrat Joe Biden essentially split voters who identified as suburbanites, according to The Associated Press' VoteCast. Trump won decisively among men and Biden had a wide advantage among women in the Texas suburbs.

Hispanic residents accounted for half the population growth in Texas. In the last election, about 6 in 10 Texas Hispanic voters chose Biden over Trump, according to VoteCast.

“As the process of redistricting begins, the Legislature should be guided by the principle of fair representation for every Texan,” said state Rep. Rafael Anchia, a Democratic member of the House redistricting committee and chair of the Mexican American Legislative Caucus.

Texas had been among several states that needed advance approval from the U.S. Justice Department for its redistricting plans because of a history of racial discrimination. But the U.S. Supreme Court overturned that requirement in 2013 and, in a separate ruling in 2019, said it would not get involved in disputes over alleged political gerrymandering, leaving that to state courts to decide. Lawsuits are expected to challenge redistricting maps in many states.

The GOP will control redistricting in 20 states accounting for 187 U.S. House seats, including the growing states of Texas, Florida, Georgia and North Carolina, where the governor is a Democrat, but the legislature has complete control of drawing new electoral lines.

Courts ordered multiple changes to the pro-Republican maps drawn in North Carolina after the 2010 census. Lawmakers on Thursday voted not to use election or racial data in redistricting. State Rep. Destin Hall, a Republican leading the House Redistricting Committee, said he is committed to making “significant and reasonable efforts to attempt to limit the partisan consideration.”

Democrats will control redistricting in just eight states accounting for 75 seats, including New York and Illinois, where the loss of a seat in each gives them a chance to squeeze out Republican incumbents.

In 16 other states accounting for 167 U.S. House seats, districts will be drawn either by independent commissions or by politically split politicians with legislative chambers led by one party and governors of another. Six states have just one U.S. House seat, so there are no district lines to be drawn.

Credit: AP
Workers erect the frame of a home being built in a new subdivision in Allen, Texas, Thursday, Aug. 12, 2021.

Outside of Texas, some of the largest growth occurred in Arizona's chief city of Phoenix, including a nearly 80% population increase in its suburb of Buckeye. But Arizona's voting districts are drawn by an independent commission, making it more difficult for Republican or Democratic officials to gain an edge in redistricting.

Simply because Democrats may be gaining strength in suburbs doesn’t mean maps drawn by Republicans will reflect that. The party in control can divide areas of strength for the opposition, said Republican pollster David Winston.

“When you’re talking about redistricting, it’s different than looking at a state as a whole,” said Winston, a longtime adviser to U.S. House Republican leadership.

The fastest-growing U.S. metropolitan area was The Villages in central Florida, which grew 39% from about 93,000 people to about 130,000. The largest retirement community in the nation is dominated by Republican voters and is a must-stop for GOP candidates. Though the Florida Constitution prohibits drawing districts to favor a political party, Republicans leaders may nonetheless try to take advantage of the new population figures. Because of its growth, Florida is gaining a U.S. House seat, giving lawmakers more leeway in line-drawing.

After the 2010 census, Republicans who controlled redistricting in far more states than Democrats drew maps that gave them a greater political advantage in more states than either party had in the past 50 years, according to a new AP analysis.

But Republicans won't hold as much power as they did last time in some key states. Republican-led legislatures will be paired with Democratic governors in Pennsylvania and Wisconsin, which both had full GOP control after the 2010 census. In Michigan, a voter-approved citizens commission will handle redistricting instead of lawmakers and the governor. And in Ohio, voter-approved redistricting reforms will require majority Republicans to gain the support of minority Democrats for the new districts to last a full decade.