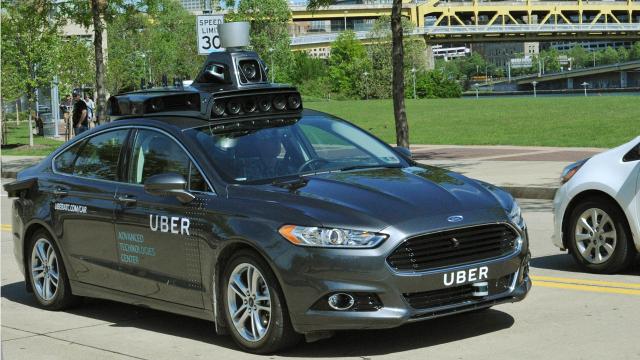 Credit: Uber
A handout photo from Uber shows one of its Volvo self-driving SUVs in a desert setting. One of the company's vehicles struck and killed a pedestrian in Tempe, Ariz., Sunday night.

SAN FRANCISCO — An Uber self-driving car hit and killed a woman in Tempe, Ariz., a tragic milestone that could lead to a major setback in the otherwise feverish development of driverless transportation.

The death of Elaine Herzberg, 49, who was crossing a street outside the marked crosswalk, appears to be the first time a self-driving car has been involved in the fatality of a person not inside the vehicle.

In 2016, a man was killed while behind the wheel of a Tesla that was driving itself in Autopilot mode when a truck cut across its path — the first such death related to a car in self-driving mode. Investigators found the driver failed to heed warnings to take back control of his car.

The Arizona accident is poised to become a focal point of a debate over the viability of self-driving cars, which promoters vow will save lives while skeptics contend it remains dangerously ill-prepared for prime time.

“There will no doubt be an exhaustive investigation," says Akshay Anand, analyst at Kelley Blue Book. "It's clear is that this has the potential to severely impact public perceptions of autonomous technology, and should be handled with utmost prudence by regulators, authorities and the industry alike.”

Uber's test car was in self-driving mode when the accident occurred, but had a safety driver — a person who is supposed to step in and take control if there's a snafu — as is the norm when testing such vehicles, according to Tempe police.

At a press conference late Monday, Tempe police Sgt. Ronald Elcock said the Uber-owned Volvo was driving at around 40 mph when it struck the pedestrian. The driver, Rafaela Vasquez, 44, and who the police initially said was a man, was not found to be impaired and was cooperating with police.

The victim stepped into the road mid-block at around 10 p.m. Sunday, police said. Elcock said that the victim might have been homeless.

Questions about whether anyone might be charged in the incident — be it the safety driver or Uber, if anyone — remain unanswered, and in fact are at the heart of ongoing issues about how self-driving cars would ultimately be regulated in case of accidents.

Uber, which is based in San Francisco, issued a statement saying that it was "fully cooperating with local authorities." In wake of the incident, the ride-hailing company has temporarily halted its self-driving testing in Pittsburgh, San Francisco and Toronto, as is its policy following any accident.

In a statement mourning Herzberg's death, Tempe Mayor Mark Mitchell said his city has been welcoming to self-driving tests "because of the promise the technology may offer in many areas," particularly for seniors and the disabled.

In a tweet, National Transportation Safety Board officials said they were sending a team to Arizona to investigate the accident.

Federal regulators have been supportive of the move toward autonomy, with Transportation secretaries under both President Obama and President Trump creating a framework for companies to share developments without giving away trade secrets.

Some incredibly sad news out of Arizona. We’re thinking of the victim’s family as we work with local law enforcement to understand what happened. https://t.co/cwTCVJjEuz

Uber CEO Dara Khosrowshahi tweeted Monday that the company had "some incredibly sad news out of Arizona. We’re thinking of the victim’s family as we work with local law enforcement to understand what happened."

This appears to be the first known pedestrian death involving a self-driving car, a technology that has long been touted by its supporters as being able to drastically reduce the number of automobile fatalities.

Around 37,000 were killed in traffic accidents in 2016, up 6% from the previous year, according to the National Highway Traffic Safety Administration.

The incident is sure to add fuel to concerns on the part of some activists, such as Consumer Watchdog, who feel the technology that allows the cars to sense their surroundings is not ready for prime time.

Critics claim that legislators in autonomous-friendly states such as California, Arizona and Michigan are too eager to accommodate such testing in the hopes of being early winners in a new mobility sweepstakes.

“There should be a national moratorium on all robot car testing on public roads until the complete details of this tragedy are made public and are analyzed by outside experts so we understand what went so terribly wrong," says John Simpson, privacy and technology project director at Consumer Watchdog.

"Arizona has been the Wild West of robot car testing with virtually no regulations in place," he says. "That’s why Uber and Waymo test there. When there’s no sheriff in town, people get killed.”

"As federal investigations shed light on the factors that led to this incident, policymakers must work towards a clear national framework to enable the prudent testing and development of this technology in a manner that will save lives as soon as possible.”

Waymo has been picking up beta-program passengers in its self-driving Pacifica minivans since last year, and later this year plans to open up the program to a wide Phoenix audience.

The company also just started operating without a safety driver overseeing the ride from the passenger seat.

It remains too early to tell if the fatality will slow the feverish pace of self-driving car progress. Large automakers and technology companies alike have been accelerating their efforts to develop commercially viable self-driving cars, which promise a host of benefits.

More: Drive for Uber? Deliver for Amazon? Here are tax rules to know

More: Uber settles its self-driving car suit with Google. The price: a chunk of Uber

Paramount is their ability to cut down on the soaring number of traffic deaths, which are partly due to distracted driving in the age of the smartphone.

But self-driving cars, which run on electricity, also would be a boon to ride-hailing companies such as Uber and Lyft, whose business models currently are hamstrung by having to pay drivers.

Automakers are keen to embrace self-driving fleets in order find a new revenue source as new generations of would-be drivers opt for transportation-as-a-service options over traditional and costly car ownership.

But questions abound about self-driving cars, ranging from insurance to their ability to deal with inclement weather. But perhaps the biggest unanswered questions — one that might be pushed to the fore in the wake of the death in Arizona — is whether consumers ultimately will prove comfortable being shuttled by a robot.

Credit: Uber Technologies
One of many challenges facing Uber: Its critical self-driving effort lacks a leader.

So far, public views on autonomy could be sobering for companies pumping billions into self-driving cars.

A 2017 survey by managment consultants Alix Partners revealed that 49% of consumers said they don’t currently feel confident in AVs’ abilities to navigate them safely, with 84% of respondents saying they were concerned about vehicle-software malfunctions and 80% saying the same about potential hardware malfunctions.

Ultimately, we may be in a difficult transition period where artificial intelligence systems such as those that power self-driving cars aren't sophisticated enough to deal with every situation, says Timothy Carone, an associate teaching professor in the Department of IT, Analytics, and Operations at the University of Notre Dame's Mendoza College of Business.

"Transitioning the knowledge that human beings have acquired over the decades of driving and flying over to autonomous systems like a driverless car or unmanned plane is a complex undertaking that will itself takes years of work for society to recognize the benefits of autonomous systems," he says, adding that what follows is a painful period where these systems improve gradually while human skills diminish.

Contributing: Gabrielle Olivera and Ryan Randazzo with The Arizona Republic.