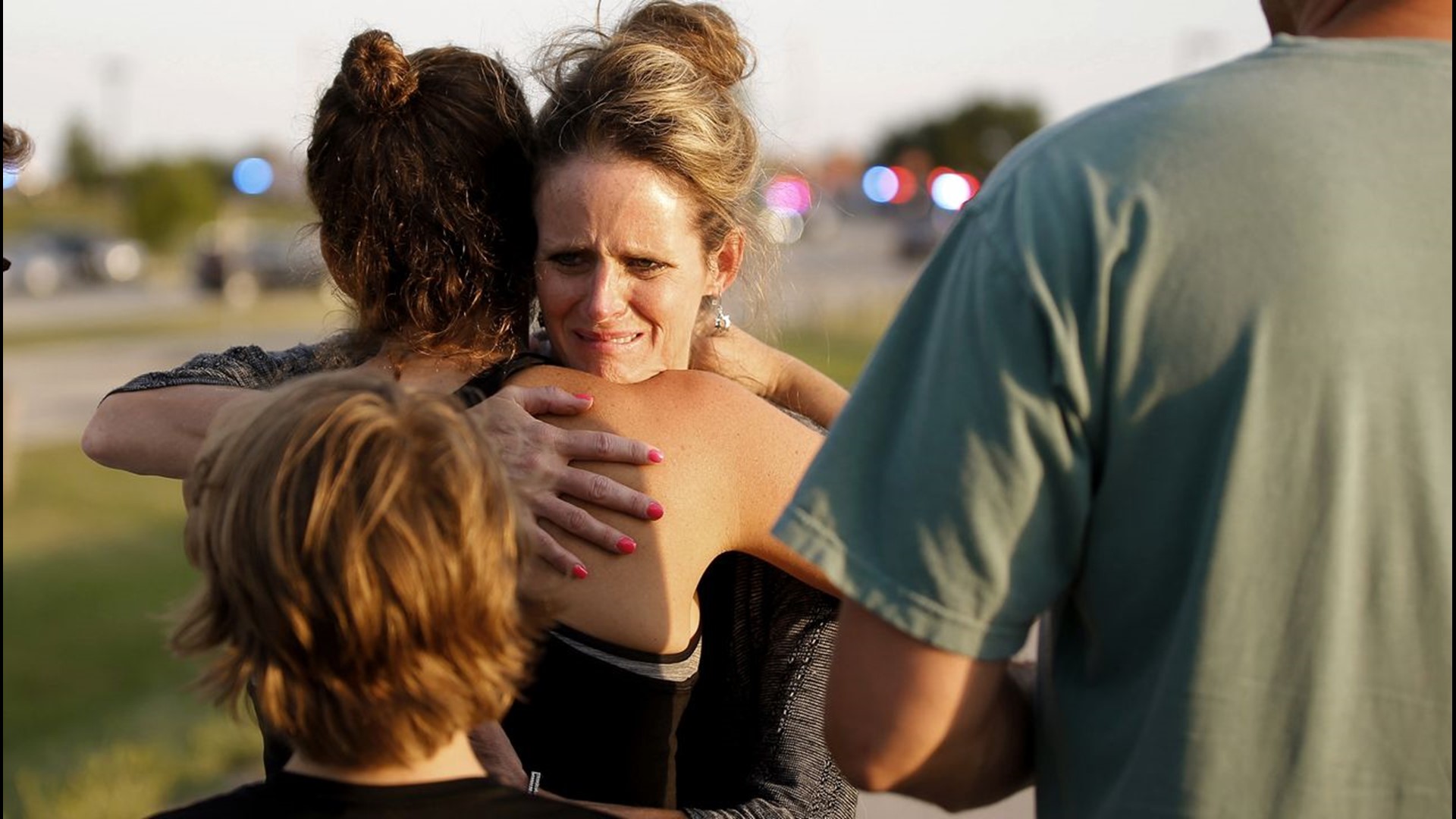 Credit: Sarah Phipps, AP
Police officers stand at the scene of a shooting on the east side of Lake Hefner in Oklahoma City, Thursday, May 24, 2018. A man armed with a pistol walked into Louie’s On The Lake restaurant at the dinner hour and opened fire, wounding two customers, before being shot dead by a handgun-carrying civilian in the parking lot, police said.

Police in Oklahoma Friday evening were still trying to understand why a man armed with a handgun and shooting-range protective gear opened fire at random inside an Oklahoma City restaurant.

But it's clear the attack, which left three people shot, could have been worse if it wasn't  for the quick actions of two armed bystanders.

Shooting suspect Alexander Tilghman walked up to Louie's Grill & Bar, a popular restaurant on the east side of Lake Hefner in Oklahoma City, around 6:30 p.m. local time Thursday and started shooting from the entrance.

He shattered a glass door. People ducked under tables while others ran from the lakeside bar in a panic.

Tilghman hit three people with a handgun, including mother Natalie Giles, 39, her 12-year-old daughter and another child. Another person fell and broke his arm during the incident, police said.

Tilghman wore ear muffs like those supplied at shooting ranges and wore protective glasses during the shooting. He was a licensed as an armed security guard, according to Catherine Edwards at the Oklahoma Council on Law Enforcement Education and Training, which issues such licenses. He was legally allowed to carry a weapon.

The shooting could have continued if it weren't for two men who ran out to their vehicles and grabbed handguns locked in their trunks, Mathews said.

"It could have really been bad," Mathews said, adding since the restaurant is a confined area right along a lake, guests indie "weren't going to be able to get away."

"I just did what needed to be done to stop the threat. Nothing special," Whittle told USA TODAY. "A lot of people would have done the same given the situation."

Nazario said the same, noting he didn't feel like a hero.

"I just can't understand being called a hero when someone's life was taken," he told USA TODAY.

He said he grabbed his gun and ran to the restaurant after hearing five or six rounds go off. Inside, tables were knocked over, a glass door was shot out and people were hiding in fear.

He confronted the gunman outside in a parking lot and yelled for the gunman to "drop the gun" multiple times.

Tilghman didn't respond and instead raised the gun again and fired another round in the parking lot.

Nazario fired two shots. "He just fell to the ground," he said.

Credit: Bryan Terry, AP
Jennifer Stong hugs Tasha Hunt outside the scene of a shooting on the east side of Lake Hefner in Oklahoma City on May 24. Stong was inside the restaurant when the shooting occurred.

Police say the two men potentially stopped a deadly assault on the restaurant. Mathews said officers have no idea whether the gunman had a bigger plan.

Mathews said police did not have any recent contact or reports about Tilghman, making his attack hard to predict. The last call was in 2003 when Tilghman, a minor, was arrested on a domestic battery charge. He said police were unaware of any history of documented mental illness.

But, Tilghman left behind a troubling series of videos on social media, documenting his life and what he believed to be the devil following him. He talks about feeling stressed and demons that are continuing to haunt and attack him.

Tilghman didn't know anyone in the restaurant and had never worked there, Mathews said, adding police haven't been able to identify any motive and believe at this point it was a "random shooting."

Police are still investigating the incident and are searching his home for any digital footprint he left behind, including his social media profiles.

More: The gun debate isn't about what you think