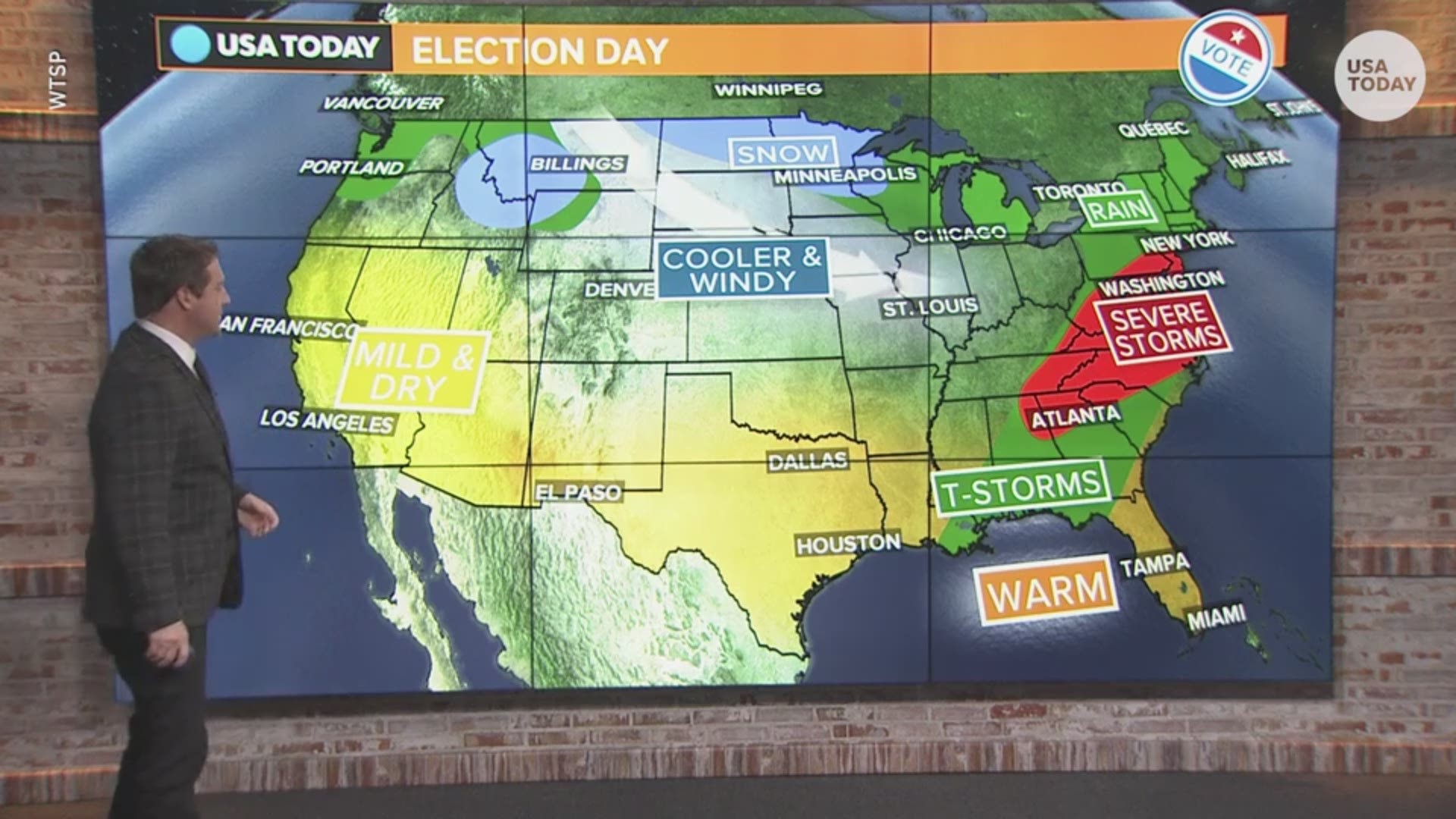 Credit: Byron Holland, AP
Voters wait in line despite rains from Hurricane Sandy to vote on the last early voting Sunday before Election Day, in New Bern, N.C., on Oct. 28, 2012. In 2018, a rainy Election Day is expected in the East.

A potent storm is forecast to blast portions of the eastern U.S. on Election Day with rain, wind and potentially strong thunderstorms.

The foul weather could affect both voter turnout and the election outcome in some battleground states Tuesday: Recent studies have found that Republican candidates tend to have a slight advantage when it rains.

In the Great Lakes and Northeast, wind-driven rain will make for a rough Election Day. Some wind gusts will exceed 40 mph in parts of the Great Lakes, interior Northeast and southeastern New England, the Weather Channel said. The heaviest rain is expected to soak New England and New York state, where flooding is possible.

Further to the south, in the Mid-Atlantic and Southeast, strong to severe thunderstorms are forecast to roar from Philadelphia to Atlanta, the Storm Prediction Center warned. Damaging winds and a few tornadoes are possible as well as locally heavy rainfall, according to the Weather Channel.

In the north-central U.S., some wet snow – or rain changing to snow – is possible from North Dakota to northern Minnesota and Upper Michigan. Light snowfall totals are expected.

Overall, well-below-normal temperatures are forecast in the north-central U.S. Tuesday: Highs will reach only into the 20s and 30s. Gusty winds will add to the chill.

In the West, heavy snow is possible in the highest elevations of northern Idaho and western Montana to western Wyoming, the National Weather Service said. The snow could make for slick roads on the way to the polls.

While some light showers are likely in Washington State, the rest of the West should be dry and mild on Tuesday, AccuWeather said, with no weather troubles.

Republicans may root for rainy weather on Election Day: A recent study revealed that at least 1 percent of voting age adults in the U.S. – people who would have voted for a Democrat had the weather been good – decided instead to cast their ballot for a Republican on rainy election days.

“Our study suggests that weather conditions may affect people’s decisions on not only whether to vote, but also who they vote for,” said study co-author Yusaku Horiuchi, a professor of government at Dartmouth College.

"Contrary to the widely shared belief that weather conditions do not change voters’ electoral decisions," the study said, "our analysis suggests that it is likely that a certain proportion of American voters would change their party preference depending on weather."

Thus, "the choice for risk-averse people is to vote Republican," Horiuchi said.

The study appeared in December 2017 in the journal American Politics Research.

More: Should Trump pray for rain on Election Day?

This report expands on previous research that also said Republicans should hope for a soggy Election Day. In a 2007 study, researchers found that for every inch of rain above the average for the day, the Republican presidential candidate received roughly an extra 2.5 percent of the vote.

That 2007 study said it was in part because the extra cost of traveling to the polls on a rainy or snowy day decreases Democratic voter turnout and increases Republican turnout.

Hold on to your hats and Election Day signs tomorrow..... #ElectionDay #ElectionDay2018 pic.twitter.com/QeObsJ80Y0