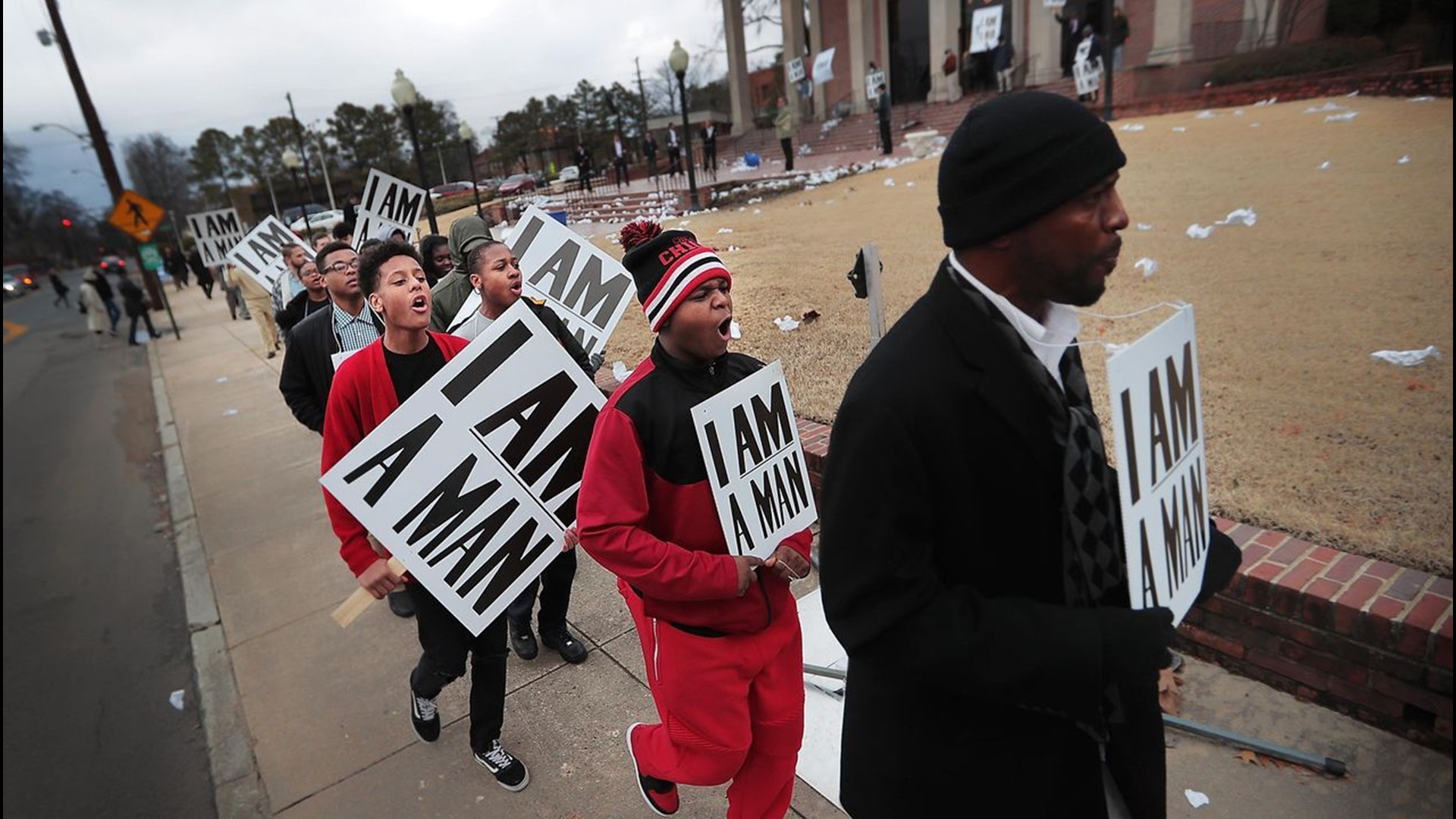 Credit: James R. Reid / MPS
A sea of striking city employees make their way to a meeting with Mayor Henry Loeb on Feb. 13, 1968. Striking sanitation workers, more than 1,000 of them by some estimates, marched on City Hall that day and were diverted to the Auditorium, where the mayor could address them.

MEMPHIS — On a rainy afternoon a half-century ago, the accidental deaths of two African-American sanitation workers in Memphis unleashed long-suppressed racial tensions and ripped open a new chapter in the civil rights movement, one that began with a bitter labor walkout and culminated with the assassination of Dr. Martin Luther King Jr.

But as far as much of the Memphis media was concerned, there was a bigger story to chase that soggy Feb. 1, 1968: Elvis Presley’s daughter was born.

“Newest Presley Has Audience,” beamed a section-front headline accompanied by three photos in the next day’s edition of the Memphis Press-Scimitar, an afternoon newspaper that devoted days of coverage to the birth of the singer’s daughter, Lisa Marie Presley.

Deep inside the Feb. 2 paper, on Page 10, was a story documenting the deaths of Robert Walker, 29, and Echol Cole, 35, who had been crushed when a packer on a garbage truck malfunctioned. A grim reminder of the workers' low pay, nonexistent benefits and brutal working conditions, the fatalities galvanized some 1,300 employees to launch a strike that convulsed the city.

1 / 102
Barney Sellers / The Commercial Appeal
The daily sanitation strike marches resumed March 29, 1968, one day after rioting left Main and Beale littered with bricks and broken glass and dappled with blood. The city was taking no chances on a repeat of the violence: National Guardsmen in armored personnel carriers equipped with 50-caliber machine guns escorted marchers. "I wore that ('I Am A Man') sign front and back. We had to go through all that just to be treated halfway fair. Somebody has to suffer for some good for somebody else. Anything good, there's somebody who suffered for it," sanitation worker Otto Carnes said in a 1992 interview.

The coverage of that seminal event foreshadowed how one of the biggest stories in Memphis’ history – an unfolding drama that garnered national and global attention -- befell a local media establishment stuck in a different era. In contrast to the reporting that lent moral force to civil rights crusades elsewhere, the city’s media generally responded with tepid interest to the workers’ plight and unalloyed hostility to the walkout and “outsiders” like King.

Kerner at 50: Media diversity decades behind

The two daily newspapers – The Commercial Appeal and the Press-Scimitar, both part of the Scripps-Howard chain -- in no small way became part of the story, strongly backing the refusal of Mayor Henry Loeb to negotiate and drawing public denouncements from strike leaders and workers.

During a news conference less than two weeks into the strike, the Rev. James Lawson, chairman of the strike committee, implored “Negroes and people of good faith” to refuse to subscribe, buy or even read either newspaper until “latent racism” was purged from their editorial pages and African-Americans were treated as “people before God and before Man."

Credit: Yalonda M. James / The Commercial Appeal
Adrian Rogers, from left, Jack H. Walker and Keith Johnson stand during the commemoration and wreath ceremony Feb. 1, 2018, honoring Robert Walker and Echol Cole, two Memphis sanitation workers who were crushed in a garbage truck 50 years ago. Walker is the son of Robert Walker. For Walker, 61, one of six children, the day his father died was "hell" and the remembrance brought back lots of memories. "It made me feel better that they recognized my daddy," he said.

The primary target of the strike supporters’ ire was The Commercial Appeal, the dominant morning paper with a circulation of some 270,000. It still carried a daily cartoon named “Hambone’s Meditations,” featuring an insultingly stereotyped African-America who spoke in exaggerated black dialect.

The paper’s editor, Frank Ahlgren, had arrived in Memphis during the 1920s and by the time the strike broke out was widely considered one of the city’s most powerful men. He would acknowledge in a 1991 article, however, that as editor he “never had any idea of being a big champion of Negro rights.”

Under Ahlgren, paper’s stance as the strike began was as predictable as it was unwavering. The city had a “firm and legal foundation” for refusing to negotiate, it said.

Credit: File
Increasingly frustrated with the coverage of the strike, African-American ministers called for a boycott of The Commercial Appeal and the Press-Scimitar. They also voiced outrage at the CA's continuing publication of "Hambone's Meditations." In the daily cartoon, Hambone — whom the newspaper, in a 1940 book commemorating its 100th anniversary, had called a "philosophical Southern darkey" — used exaggerated black dialect.

The papers provided little coverage giving readers a humanized look at the workers and explaining why they were striking.

“There was just no appetite (among editors) for the sorts of stories that should have been done,” remembers Thomas BeVier, now 81, a CA reporter at the time.

Some black leaders, such as James L. Netters, a pastor and one of three African-American City Council members in 1968, contend The CA and other press outlets were "very fair" in exposing the working conditions strikers faced.

But the lone black member of the CA staff, Calvin Taylor, a college student and copy clerk during the strike, said the paper reflected the views of the white establishment. “The African-American point of view was not the one that was being presented by the CA,” he said.

The one news outlet that did provide an African-American perspective was the Tri-State Defender, the weekly paper serving the city’s black community. It gave prominent play to workers’ struggles and reports of police brutality against African-Americans, referring to officers as “Nazi cops” and “trigger-happy cowboys.”

Nearly six weeks into the strike, King, who was planning a Poor People's march in Washington, came to Memphis to throw his support behind the workers.

The city’s media greeted the rights leader with general hostility, portraying him as a troublemaker embracing the strikers’ cause to enhance his own power and prestige. When a Downtown march led by King dissolved into violence, The CA and other outlets were quick to blame him with derogatory cartoons and editorials.

In the sobering aftermath of King's assassination, the newspapers offered rewards for information leading to the killer's arrest and called for a resolution to the strike. The CA also dropped "Hambone."

In the decades since, The Press-Scimitar closed while The CA made progress, however haltingly, in its efforts to cover a majority-black city fairly and with sensitivity. During 2017, the paper named its first African-American executive editor, Mark Russell, and hired its first minority top executive, President Mike Jung.

Echoes of the past persist, however. During the past two years the paper's editors have acknowledged missteps regarding a headline about a racially motivated shooting of police officers in Dallas and about a photo accompanying a story on a high school graduation brawl that showed a black woman who was not involved in the melee.