"It helps to know there’s someone else out there that feels the same way." 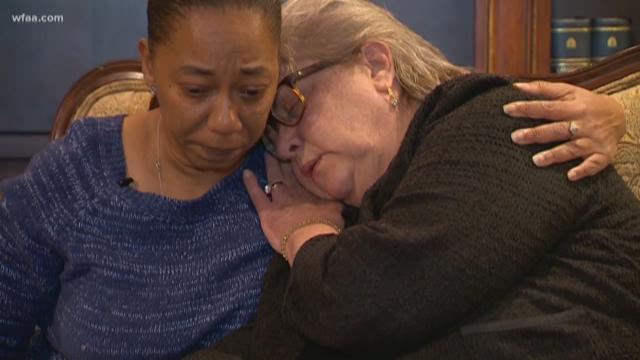 LaSondra Kelley and Vicki Timpa had never met before Friday, but when they did, they were two mothers joined together in grief.

Kelley's daughter, D'Lisa, was beaten and strangled more than three years ago.

Sgt. Kevin Mansell was the 911 supervisor disciplined for mishandling a 911 call reporting her missing.

His decision not to send police resulted in a delay in police responding to look for D’Lisa.

Now, that same sergeant is one of three officers accused of misdemeanor deadly conduct in the 2016 death of Vicki Timpa's 32-year-old son, Tony.

“It helps to know there’s someone else out there that feels the same way,” Kelley says.

Mansell, officer Danny Vasquez and a third officer were indicted on Thursday. The third officer’s name has not been released because he is currently deployed.

“I miss my son every second of every day,” Timpa says, sobbing.

A death certificate lists Timpa’s death as the result of drug use and physical restraint.

Mike Mata, president of the Dallas Police Association, says both internal and criminal investigations cleared the officers of wrongdoing and found the officers acted within their training.

On the day he died, Timpa had purchased a lighter from an adult book store. Timpa was high on cocaine when he called 911 for help.

Two security officers restrained and handcuffed him after he ran into the street. Officers arrived and took custody of Timpa.

“Mansell, as soon as he got there, he called for an ambulance,” Mata says. “This isn’t an isolated call.

We handle these calls routinely, daily, weekly and when we get there we’re hoping for the best.”

A lawsuit files by Timpa’s family give the following account of what the body camera footage shows:

“You’re going to kill me,” Timpa tells the officers.

Officer Dustin Dillard rolls Timpa with his chest face down in the grass. Once face down, Vasquez puts his knee on Timpa’s left shoulder for a few minutes.

Dillard puts his knee in Timpa’s back and pins him with his body weight. Timpa repeatedly begs for help and can be heard gasping for air.

Timpa becomes unresponsive and silent after about 11 and half minutes. Another minute passes and Dillard asks if Timpa is still conscious. Dillard removes his knee about two minutes later.

By then, he’d kept his knee in Timpa’s back for more than 14 minutes, the lawsuit said.

In an interview, Mata defended the officers, saying putting a knee in the back is called weight displacement. It’s a technique taught in the academy.

“We try to use the minimal amount of force to gain compliance so they can get some type of medical treatment and that’s what these officers did,” Mata said.

On the footage, the officers can be heard suggesting that perhaps Timpa had fallen asleep.

They begin joking about waking him up for school and breakfast.

“One mimics Tony’s incoherent speech while Tony lays silently on the grass,” the lawsuit says.

The officer discuss with EMS workers what to do with Timpa. He’s loaded onto a gurney.

“I hope I didn’t kill him,” Dillard says, according to the lawsuit.

A custodial death report says that Timpa did not threaten the officers, did not try to flee and did not resist being handcuffed.

“Why did they laugh at my son when he was begging for help?” his mother says. “Why won’t they show the public that? He didn’t fight them. He didn’t struggle. He just begged for help.”

For D’Lisa’s mom, the grief is no less three years later.

She believes that Mansell should have been fired for his actions in that case.

“I just feel like if someone had heard our cries three years ago, three and half years ago maybe this young man would still be here,” she said.

Mansell was the police supervisor on duty when D’Lisa’s grandmother called 911. She told an operator that her other granddaughter had received a disturbing phone call from D’Lisa in which she could hear D’Lisa screaming and the voice of a man before the phone abruptly disconnected.

Mansell told the 911 operator to hold off on sending police officers. He asked the phone company to do a locator search on the phone. Mansell told supervisors he got busy with other things and forgot about it. No police officers were sent that night.

A family member called 911 the next day and police finally responded.

D’Lisa’s body was found about a week later in an abandoned house. She had been beaten and strangled. An autopsy showed she was two months pregnant.

D’Lisa’s mom believes there might have been another outcome for her daughter’s case if police had responded and started investigating sooner.

For his actions, Mansell received a one day suspension. In his disciplinary hearing, Mansell told supervisors that in hindsight he probably should have gone ahead and sent the police.

“Would the results have been different? Probably not,” he said, according to an audio recording.

Mata says other than that suspension, Mansell had a spotless disciplinary history.

“I think in 25 years to have one discipline is not a troubled officer,” Mata says. “It’s called a career.”

As the two women talked, they wiped away each others' tears.

“Your daughter was beautiful,” Timpa told her.

“Thank you,” Kelley responded. “Your son was handsome and he didn't deserve to die like that.”