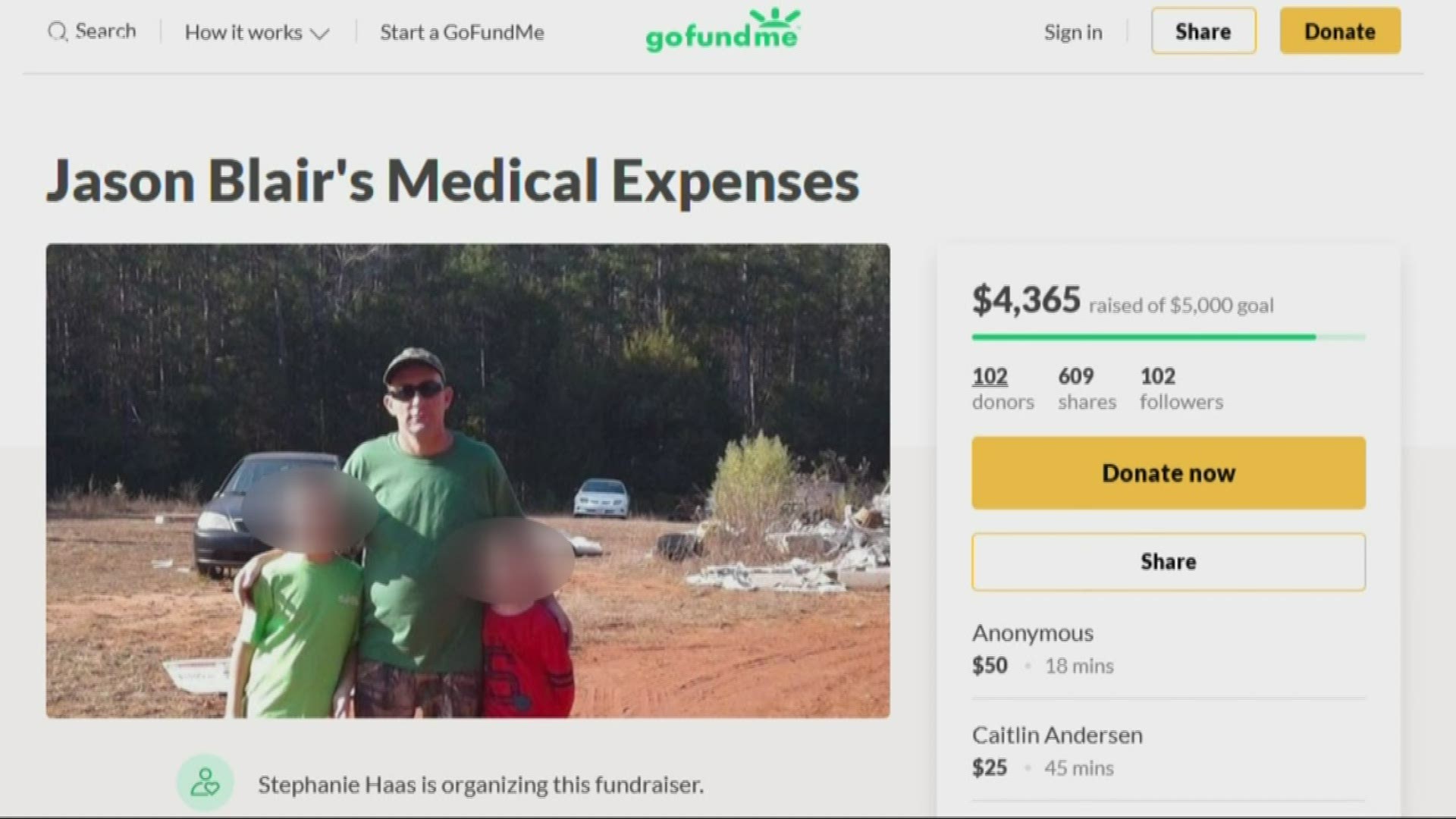 A father of four is fighting for his life after he fell off a ladder hanging Christmas lights.

It’s supposed to be the most wonderful time of the year, but as the holiday season approaches one family is living through a nightmare.

Family of Jason Blair, a father to four young children, says Blair often picked up odd jobs to provide for his family.

This week while hired to hang Christmas lights at a home, witnesses say Blair was reaching for a strand of lights when he slipped off his ladder, falling head-first onto the concrete driveway.

Homeowner Stephanie Haas, who hired Blair says the mailman first discovered him. She says he was quickly life flighted to Carolina’s Medical Center.

“Along with a severe brain injury that required surgery to remove a portion of his skull, he also sustained several skull fractures, broken ribs, a blood clot in his lung, and all over body bruising. While we were at the hospital the blood clot in his lung grew larger causing his lung to collapse. They pushed us out of the room and placed in an emergency chest tube. He is on a ventilator and in a medically induced coma. Moving forward there is little hope for recovery,” she wrote in the GoFundMe she set up to help pay for Blair’s medical expenses.

Credit: Family photo
Jason Blair suffered traumatic injuries while preparing his family home for Christmas. He was found by the mailman after falling off a ladder.

Blair’s tragic accident has brought light to a heartbreaking reality.

Each year there are more than 164,000 emergency room-treated injuries and 300 deaths, all caused by falls from ladders, according to the World Health Organization.

“There are plenty of people who this time of year, moonlight doing this it is great extra income for them, but as I’ve seen driving around there are people that are doing this in a way that I hope they’re OK,” says Charlie Zylstra who owns Window Genie of Lake Norman.

Zylstra’s company is one of many in the greater Charlotte area who offers professional holiday light hanging. He says his employees are trained by OSHA and use ladders with safeguards.

“It comes with stabilizers and leg levelers basically to keep the ladder from sliding out from underneath you and very few homeowners have that kind of stuff or are trained to use it,” says Zylstra.

Zylstra says homeowners can eliminate the risk of injury to themselves or to handymen, by hiring a company whose licensed and trained.

So far raised the GoFundMe for Blair has raised more than $5,000.

Jerry Sandusky resentenced to 30 to 60 years, same as before

After every puppy in her litter died, dog 'adopts' orphan puppies