Why didn't authorities refer to Greenville incident as a 'mass shooting'?

There is no single definition for mass shooting incidents, but many believe that Greenville qualifies. 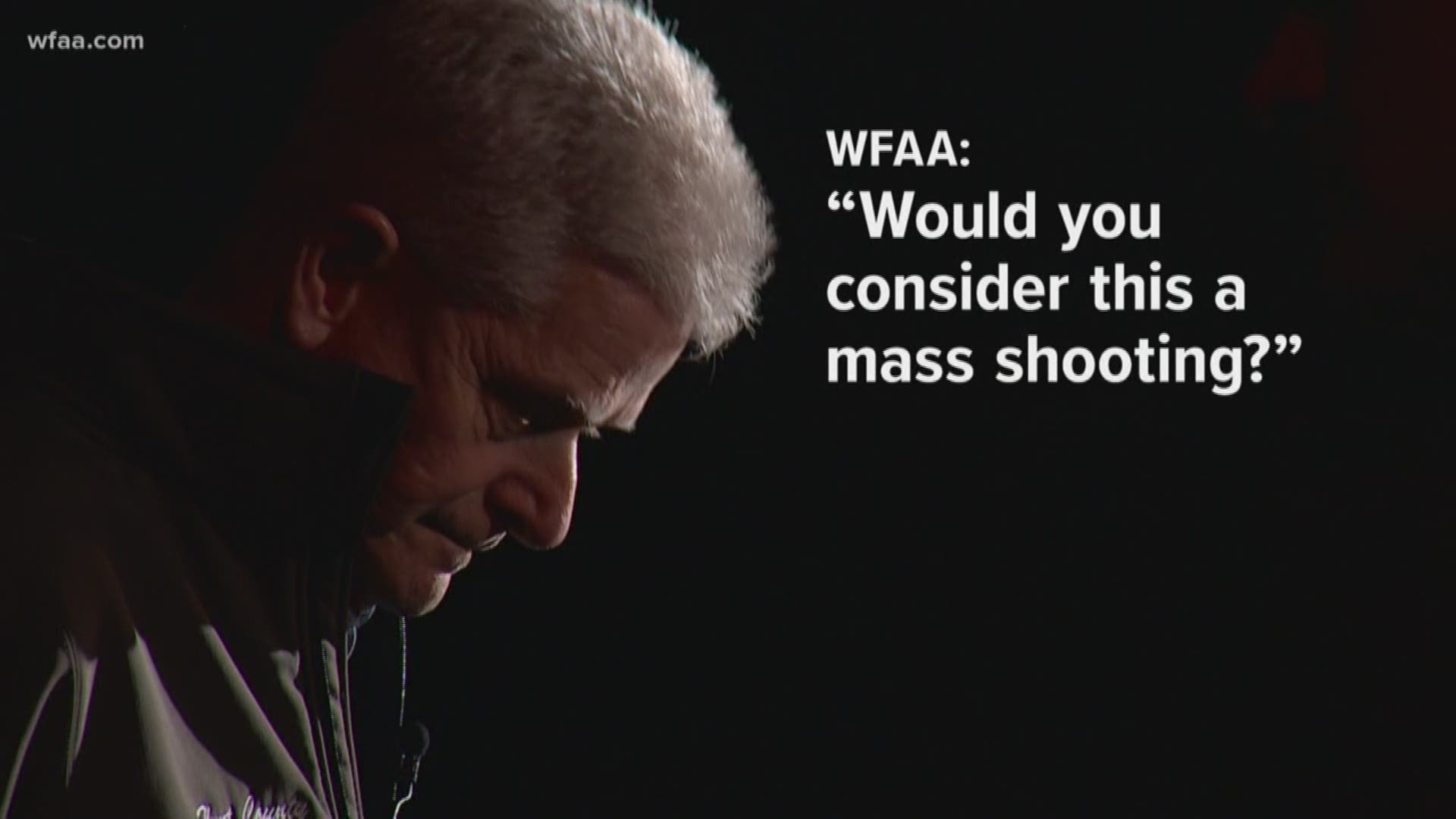 DALLAS — In the panic that played out Saturday night in Greenville, there was a moment that made many pause.

During the first press conference following a shooting at a massive party in Greenville, authorities declined to use the term "mass shooting" to describe what happened, with two people dead and at least a dozen others injured.

"Based on the information, the limited information I have standing in front of you, I wouldn't class it as a mass shooting," said Hunt County Chief Deputy Buddy Oxford.

On our WFAA Facebook page, several viewers questioned the rationale for that statement.

RELATED: 'It was complete chaos': 2 dead, 12 others injured in shooting at homecoming party in Greenville

Hunt County authorities did not elaborate, but according to Guns & America, a project that reports on this subject, there is no single definition for a mass shooting.

One organization that tracks nationwide statistics goes with a broad categorization that it's when "four or more people are shot or killed."

Other organizations define it as "indiscriminate mass murder" that occurs in a public place.

According to Guns & America, the FBI doesn't even use the term "mass shooting," instead tracking what they refer to as "active shooter incidents."  The type of violence matters. Gang crimes, drug crimes and accidents are all excluded from the statistics.

The Hunt County sheriff believes that there may have been a specific target in the crowd Saturday and other victims were impacted randomly Saturday night. But the purpose of violence hardly matters to those bystanders who were caught up in the danger. Their experience sounds the same as what other victims have recalled after mass shootings in Walmarts, nightclubs and schools, ducking for cover and searching for escape routes.

Dallas Police Sgt. Sheldon Smith, who is also the chapter president of the National Black Police Association, says that the definition of mass shooting needs to change.

He believes that the Greenville incident should be considered a mass shooting.

"We have to look at it differently now in law enforcement," Smith told WFAA. "In this instance, you have 750 people or more in a building. A guy goes in and he starts shooting a gun.

"You have hundreds that have felt that their life is in danger, that that they thought that they would die," Smith added. "That's the new classification of 'mass shooting.' It's changed. Our world has changed."