'We need radical transformation': What happened across Dallas-Fort Worth Sunday, and where it goes from here 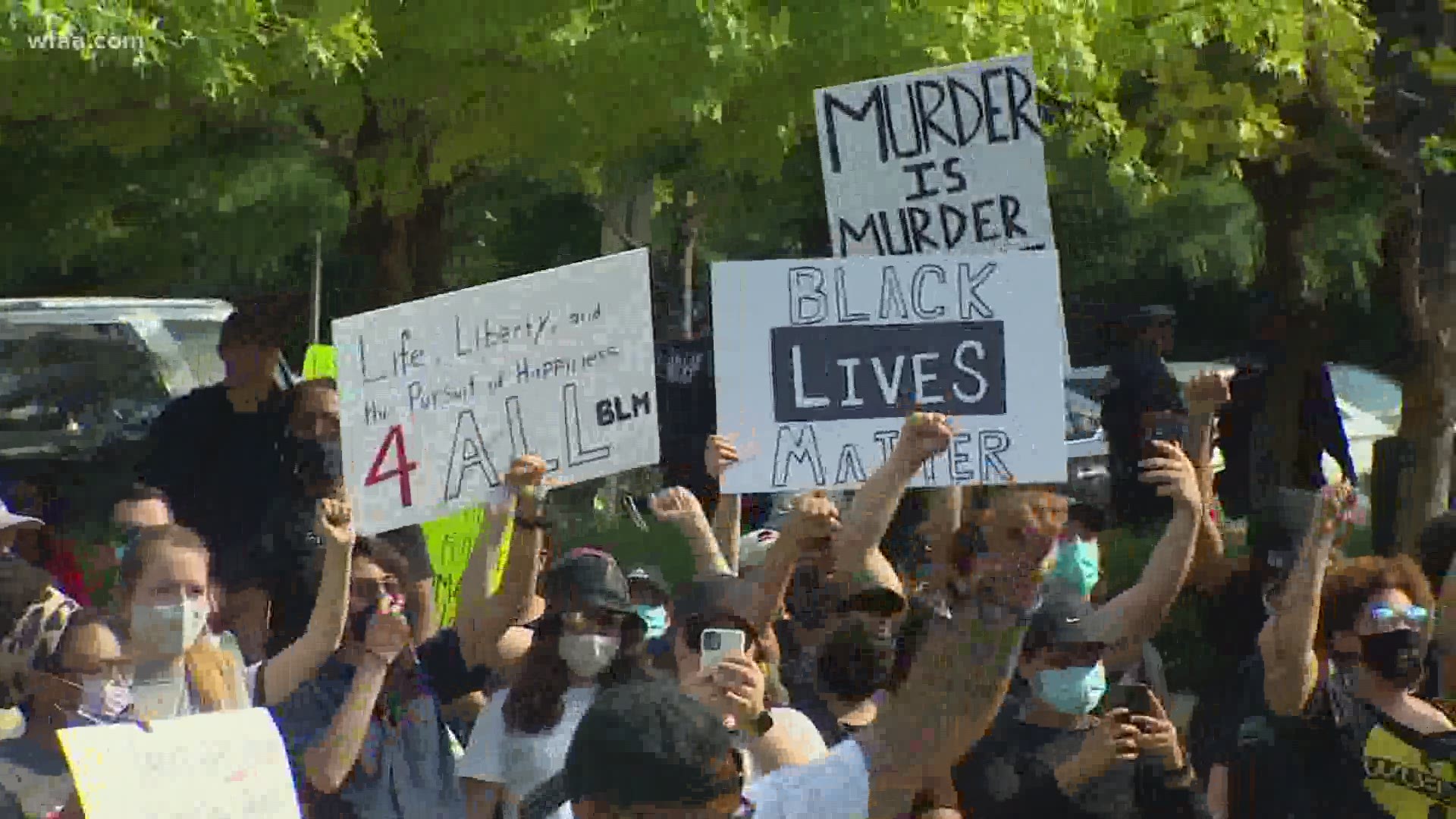 Days of protests, civil unrest and vandalism have continued to grip communities across the U.S. and in North Texas after the death of George Floyd last week in Minneapolis police custody.

"The number one question I get during this time of COVID is, 'When do we get back to normal?' But when it comes to violence towards black people, we don't want to get back to normal, because normal hasn't served us well," he said. "We need to move to a place where not every 10-year-old black young man has to have a talk with his parents about how to keep himself safe in interactions with the police."

Hundreds of people gathered in downtown Dallas again on Sunday to peacefully protest for that transformation before a curfew went into effect at 7 p.m.

Jenkins said he felt the curfew in Dallas "did a pretty good job" of keeping people and businesses safe. Police said they arrested more than 120 people while enforcing the curfew, which lasted until 6 a.m.

"We saw less looting, less vandalism," he explained. "It's important that we let people protest, protesting is a quintessential American right, it moves the ball further towards a more perfect union."

In Fort Worth, where there is no curfew in effect, protesters remained active later into the night.

For several hours, demonstrators formed a line and blocked the West 7th Street Bridge, where they faced off with police.

In a news release, Fort Worth police allege that when about 300 people had started to walk towards the West 7th District shopping area, officers overheard those in the group saying "they were going to 'tear up W 7th,' which indicated their intent to damage property."

That is why officers say they blocked the demonstrators' path on the bridge, according to the release, "in an attempt to prevent any destruction of property."

After several hours, police claim people in the crowd began to throw frozen water bottles at officers. At that point, tactical members of the Fort Worth police began to set off smoke screens and flash-bang grenades to separate the crowd from officers, according to police.

Many in the crowd left the scene, but several dozen stayed and continued to throw frozen water bottles, police said. Officers set off more smoke screens and flash-bang grenades, but said that did not have much effect.

People in the crowd responded by setting off fireworks "toward officers," police said. Police then set off tear gas to clear the remaining crowd.

Officials said when some of the people continued to stay and shoot of fireworks, officers advanced toward the crowd and aerial footage showed people being placed into handcuffs.

By 1 a.m., police said they were responding to looting calls in the shopping district area.

Previous protests on Friday and Saturday evenings had remained calm and peaceful in Fort Worth.

Saturday and Friday night in downtown Dallas, however, there had been looting and property damage.

Police said they arrested more than 100 people on riot-related charges on Saturday and noticed many of those engaging in criminal activities "are not members or residents of the city of Dallas,” Chief of Police Renee Hall said.

RELATED: Many arrested for riot-related charges don’t live in Dallas

WFAA easily identified 30 people arrested on riot-related charges from the department’s arrest database. Two-thirds of those individuals do not have Dallas addresses. Many of those who were from North Texas, however.

Instead, they came from Bridgeport, Burleson, Denton, Fort Worth, Grand Prairie, Irving, Lewisville, Terrell, The Colony and Wichita Falls – even one from Knoxville, Tennessee.

Police charged all of them with misdemeanors, which means they could have ended up back on the streets within hours.

Moving forward, several protests and marches are scheduled to occur Monday evening, including one hosted by the Next Generation Action Network that is planned to take place in front of Dallas police headquarters from 6:30 p.m. to 8:30 p.m. while the city's curfew is in effect.

A Black Lives Matter March is planned to start at 5 p.m. at the Warren Sports Complex in Frisco.

A separate peaceful protest is planned for 6 p.m. in downtown Denton at the city's Square.

WFAA staff contributed to this report.