"How can a person, a body be in a room for three years," the veteran's mother Doris Stevens asked. "I have so many questions that need to be answered. So many." 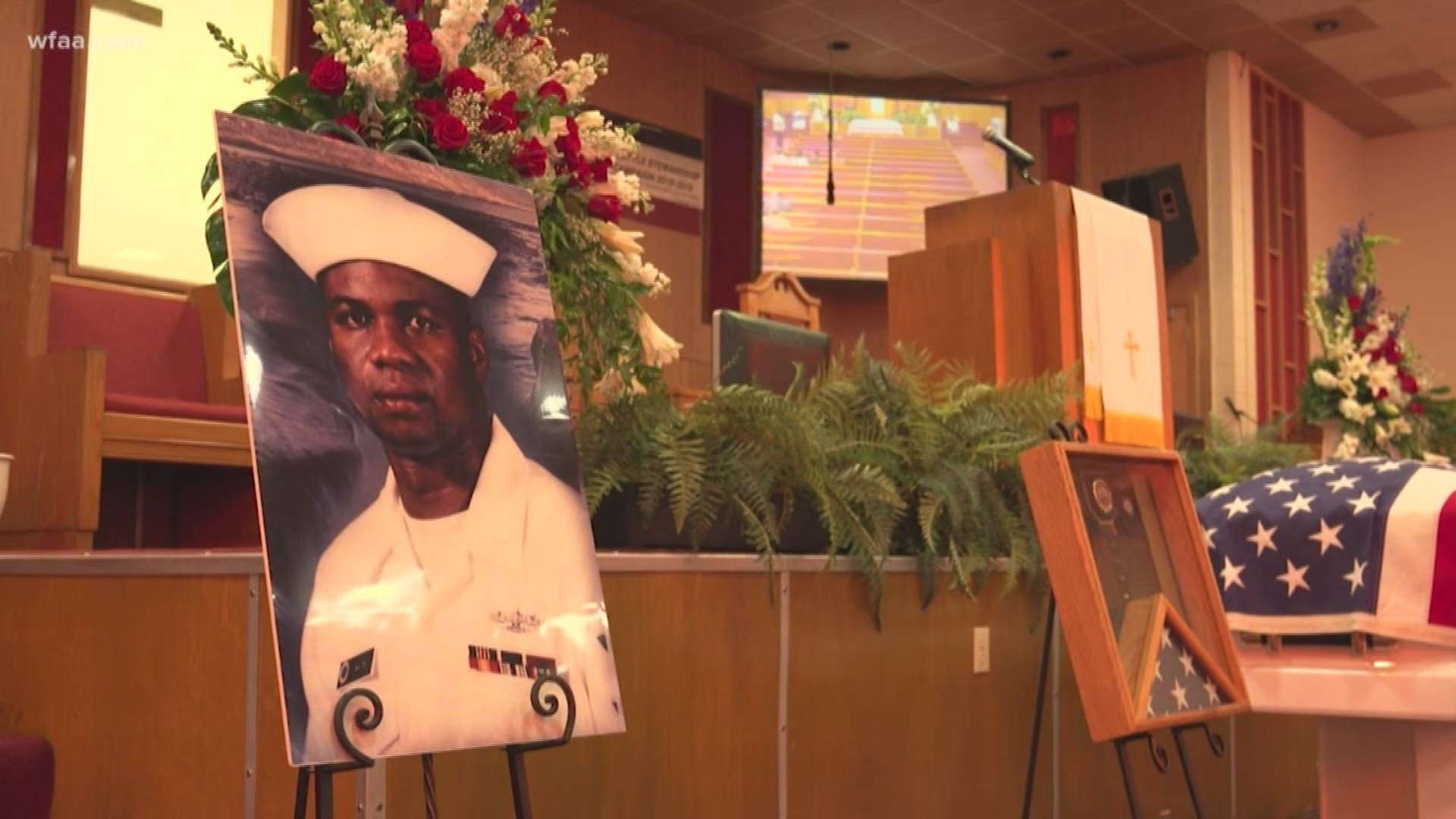 SHREVEPORT, La. — A Navy veteran was laid to rest Thursday in his hometown of Shreveport, Louisana. A month after he was found dead in his apartment in DeSoto, Texas and nearly three years after he died on his apartment kitchen floor.

Ronald Wayne White Sr. was a military contractor and a single father of two children. He traveled the world for work and most recently had homes in both Glenn Heights south of Dallas and in the Philippines.

His mother Doris Stevens told WFAA last month that he would often call her weekly, letting her know what part of the world he had traveled to next.

But in 2016 the phone calls stopped. Neither Stevens nor her grandchildren could find any trace of him.

Then, just last month, maintenance workers at the DeSoto Town Center apartments were investigating a number of units that appeared to not be using any water. They forced their way into his dead bolt-locked apartment, a top third floor unit at the far northwest corner of the complex.

RELATED: Navy veteran found in his apartment had been dead for 3 years, medical examiner says

Credit: Kevin Reece / WFAA
Ronald White was found in his apartment three years after his death. His funeral was Dec. 12, 2019, in Shreveport, La.

DeSoto police say they found White's body face-up on the kitchen floor. A medical examiner, aided by medicine receipts they found in the apartment, determined he had been dead since perhaps the month after he moved in.

With a history of diabetes and high blood pressure White's family agrees with investigators who believe he may have died of a medical episode: natural causes.

"He was a great dear friend of mine," his friend Christopher Spivey said during the funeral at Morning Star Missionary Baptist Church in Shreveport. "He was a loving person. Ronald would do anything for anybody."

"He don't have to cry no more. Don't cry for him," said Rev. Algernon Hall as part of his message to White's family and friends asking them to lean on their faith for understanding and comfort. "Don't weep for him."

But White's mother Doris Stevens, seated in the front row directly in front of her son's flag-draped casket, did weep, for a life that ended at first without anyone knowing at all.

A motorcade, with Shreveport residents, often stopping what they were doing to stand with their hands over their hearts as the hearse carrying the veteran's remains passed by, winded its way 30 miles to Northwest Louisiana Veterans Memorial Cemetery in Keithville.

There, after a brief graveside service where his 32-year-old son Ronald Jr. was given the folded flag that had covered the casket, his children agreed to talk with WFAA about the three-year ordeal and the questions they still haven't been able to get answered.

"Honestly we talked to our father at least once or twice a week," Ronald Jr. said standing next to his younger sister Ronisha, 24. "And so once those calls stopped coming in, we automatically were thinking something's not right."

"The perfect storm," Ronisha said of the horrible chain of events that led to their father's disappearance.

"How can a person, a body be in a room for three years" the veteran's mother Doris Stevens said. "I have so many questions that need to be answered. So many. So many."

It is an ongoing search for answers that has them considering legal action against the DeSoto Town Center apartment complex for not checking on him sooner. But Thursday, three years after Ronald White's death, they focused on finally having the chance to say goodbye.

"What makes me sleep at night better is because I know I did everything in my power," Ronald Jr. said. "I called the embassy. I even flew to Manila looking for him. I reached out to my grandmother to put in a missing person report. I've done everything and exhausted every resource to look for my dad."

A dad now at rest on a quiet hill in Louisiana, yet with so many answers still to find.