Motion to throw out the confession of woman accused of dismembering, disposing Vanessa Guillen's body was denied

Guillen supporters are set to protest in front of the courthouse Wednesday, demanding Aguilar remain imprisoned for her alleged role in the death and disappearance. 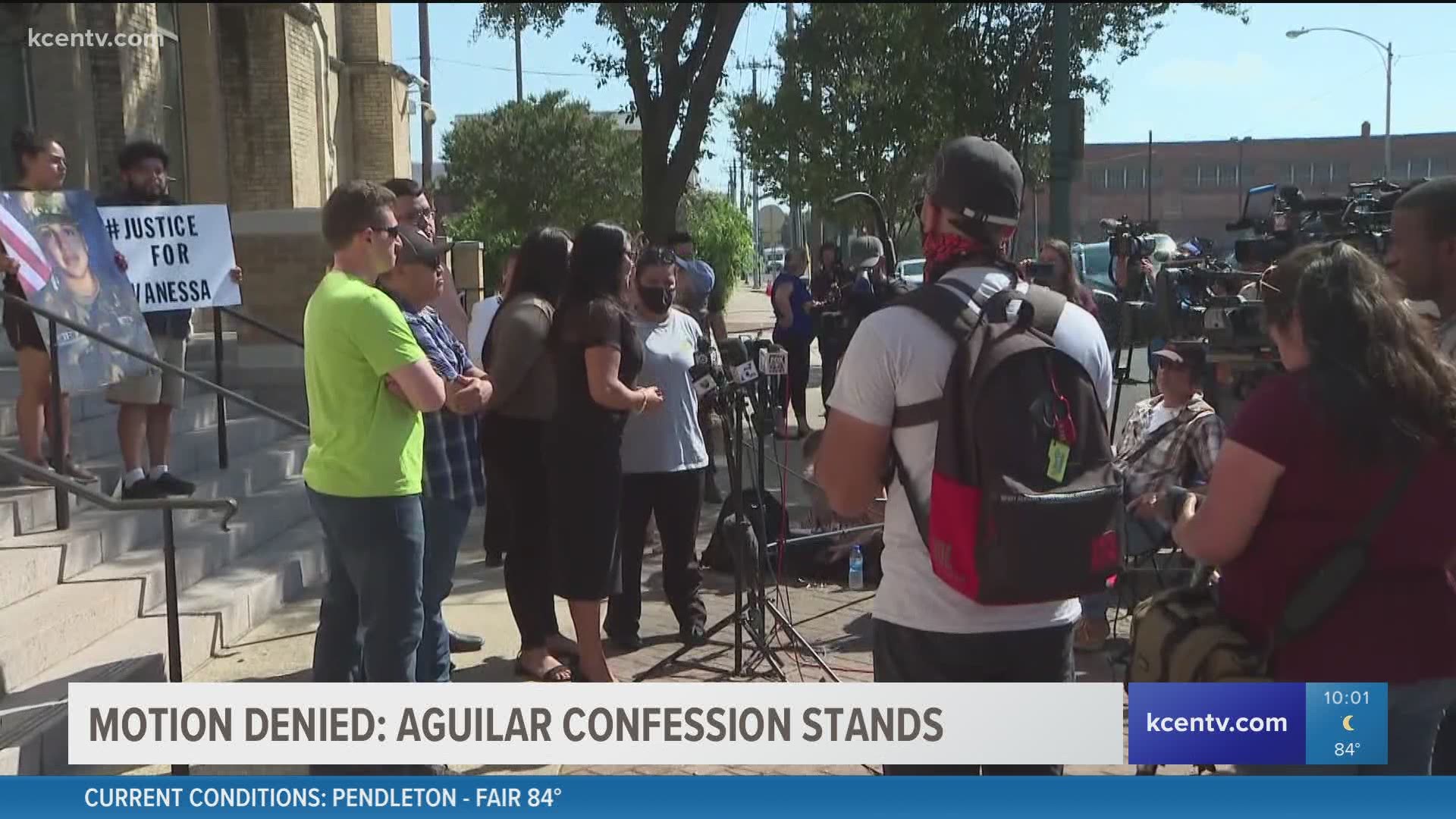 WACO, Texas — The motion to throw out the confession of Cecily Aguilar, the woman accused of helping dismember and dispose of Fort Hood soldier Vanessa Guillen, was denied by a judge on Wednesday.

She appeared before Judge Alan D. Albright on Wednesday for a ruling on motions to throw out her confession and dismiss the case.

Aguilar's attorney, Lewis Gainor, filed a motion in late March to have statements Aguilar made about Guillen's death tossed out. Gainor argued Aguilar's Fourth Amendment Rights were violated as she was illegally detained. Officers also failed to advise Aguilar of her Miranda rights, according to the motion.

In response to the motion filed by Aguilar’s attorney, prosecutor Mark Frazier argued that the defense’s claim that Aguilar was not properly mirandized are not supported by the facts of the case or the law.

The court was also shown video of the interview with Aguilar. Dendy and Ray first questioned Aguilar on May 18, 2020. On June 21, 2020, Aguilar's cell phone evidence caused them to go the Leon River to see if a search was needed. Both investigators notified Army CID that they found a burn site.

On June 30, 2020 Dendy and Ray found Aguilar at Sun Mart in Killeen, where she worked, to give her a target letter. The target letter informed Aguilar that she was a suspect in the disappearance of Guillen. She became a suspect after she made some inconsistencies about her whereabouts.

In court, Ray and Dendy admitted they wanted to keep a close eye on Aguilar out of fear that she might flee the area.

Shortly after giving Aguilar the target letter, officers spotted her leaving Sun Mart in a red minivan heading toward Fort Hood. Once on post, they stopped Aguilar and took her in for questions to which Aguilar replied, "I want to get this over with," according to documents.

The judge decided to deny her motion following the testimony and video, saying she admitted multiple times on camera that she was not being held against her will and reportedly confessed because she thought it would help her case and allow her to go home. On camera, Aguilar could be heard saying, "I'm not going to be able to go home tonight" in the interview.

"Probably not," Dendy said in the recorded interview.

"That's why I thought I was doing all of this," said Aguilar. "I've been helping all night long and I'm still going to jail tonight?"

The family of #vanessaguillen is speaking moments after a judge denied a motion to throw out the Cecily Aguliars confession @6NewsCTX pic.twitter.com/JLX6A5RLvz

RELATED: Defense files motion to throw out confession made in Vanessa Guillen murder

The defense also filed another motion in late April to have Aguilar’s indictment dismissed altogether. The motion argues that the indictment lacks specificity, fails to state an offense and charges the same offense in more than one count. Aguilar’s defense argues the indictment includes no other alleged factual basis or allegations.

However, Daryl Fields with the U.S. Attorney's Office told 6 News the judge wasn't going to put it on the agenda Wednesday and it will be decided on a later date.

Protestors are starting to rally in front of the Waco federal courthouse for fort hood soldier #VanessaGuillen. The woman charged in connection to her death is in court today. pic.twitter.com/qNZklykTa3

Supporters of Guillen protested in front of the courthouse during Aguilar's appearance, demanding that Aguilar remain imprisoned, according to the post.

Per a criminal complaint in the case filed July 2, 2020, Aguilar helped her boyfriend Spc. Aaron Robinson dismember and bury Guillen's remains near the Leon River in April 2020 after Robinson reportedly killed Guillen on Fort Hood with a hammer in an armory room on Fort Hood on April 22.

Guillen’s remains were found June 30. Robinson shot and killed himself early July 1 as Killeen police closed in on him after he left Fort Hood.