"I will miss working with my friend Ron, and know I speak for the entire Texas delegation when I say we feel his loss deeply. God Bless you," Rep. Kevin Brady said. 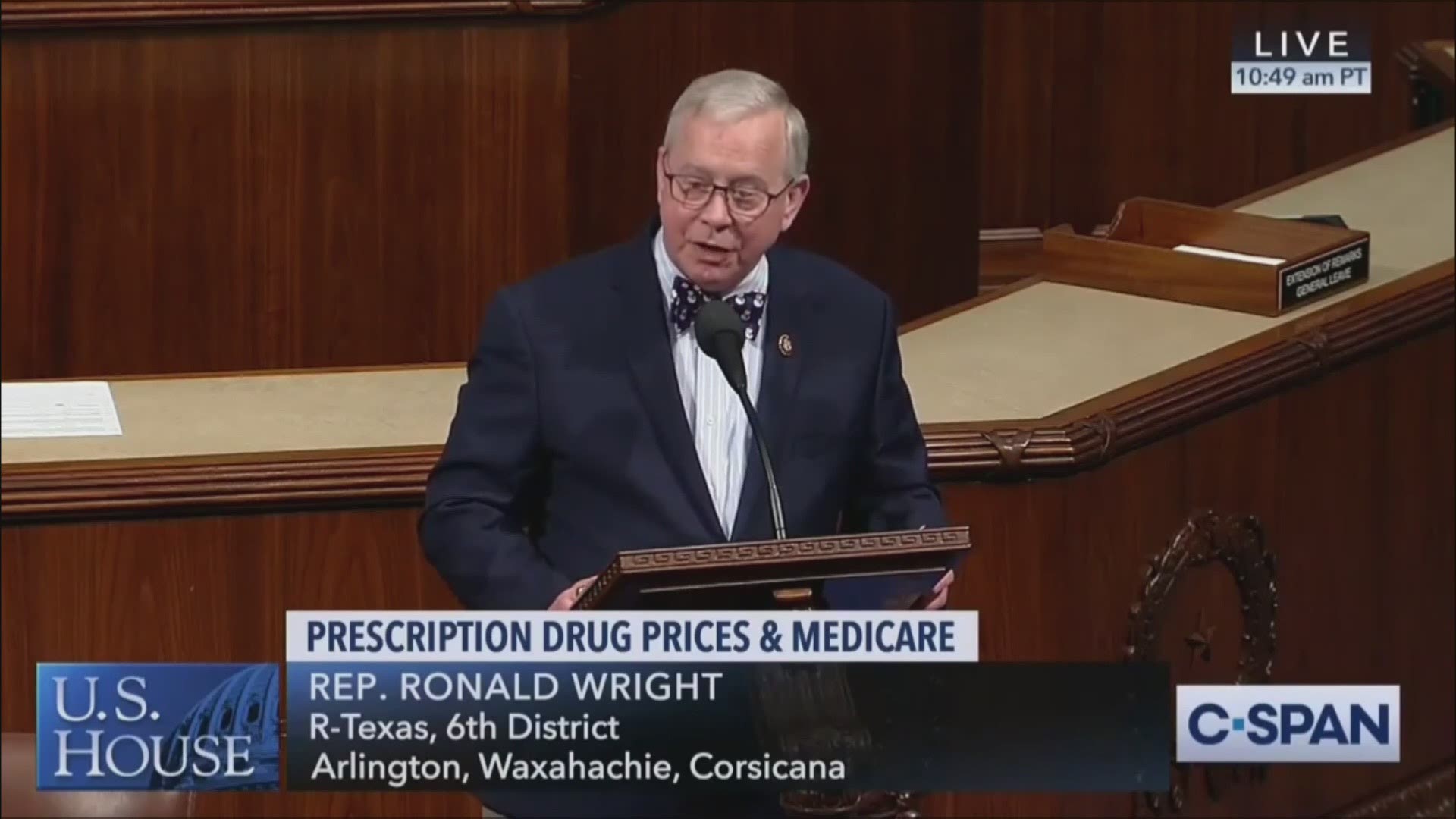 This story will be updated as additional statements are published.

U.S. Rep. Ron Wright, R-Arlington, died on Feb. 7 after he was hospitalized due to COVID-19, his campaign announced Monday. He was 67 years old.

His wife Susan was at his side at the time, an announcement from his campaign said. Both of them had been hospitalized in Dallas for the past two weeks after they tested positive for COVID-19 in mid-January.

Wright was first elected to represent District 6 in 2018. He previously served on Arlington's City Council from 2000 to 2008 and replaced Betsy Price as the county's Tax Assessor-Collector in 2011 before being elected to the seat in 2012 and again in 2016.

After news of Wright's death became public on Monday, leaders from across the state as well as the president reacted to the news, sharing their condolences for his family and constituents.

President Joe Biden say he and Jill were saddened to learn of Wright's passing, and were praying for his family.

In addition to recognizing Wright's years of service, Biden call Wright a fighter.

"He was also a fighter who battled bravely against both cancer and COVID-19, diseases that our nation will continue working tirelessly every day to defeat in the memory of all those we have lost," said Biden.

"Ron was a principled leader who fought to preserve Texas values and was an exemplary representative of his district. His personal strength and commitment to standing up for the unborn were unwavering," Abbott said in a statement, adding that his family was praying for Wright's loved ones.

U.S. House colleague Collin Allred, a Dallas Democrat, said in a statement he and his wife were praying for Wright's family.

"I am greatly saddened to hear of Congressman Wright’s passing," his statement read. "When I was looking for a Republican to help lead the push to create the Garland VA, Ron Wright stepped up and was with me every step of the way. We had very different views on many things, but he was a man of principle and will be missed.”

Republican Sen. John Cornyn said his heart went out to Wright's family who he hopes "find solace in his legacy of service.”

“Ron was a passionate public servant and a strong advocate for Texas values, his neighbors in North Texas, and constituents across Texas’ 6th District,” Cornyn said.  “He was a Texan first and foremost, and we saw that every day as he put his community first.

Republican Sen. Ted Cruz said he and his wife were saddened to hear of Wright's passing and sent their condolences to his family in a statement.

"Ron was not only a dedicated public servant, a principled conservative, and a proud Texan, he was also a loving father and grandfather," Cruz's statement read in part. "Ron’s life is a testament to his unshakable faith and now he rests with the Lord, having fought the good fight, finished the race, and kept the faith."

U.S. Rep. Van Taylor, R-Plano, said in a statement he was "lucky to have known Ron and proud to have called him a friend."

"Battling cancer not once, but twice, Ron faced adversity with strength and grace, inspiring all who knew him," Taylor said.

"Despite his health challenges, his good spirits never faltered and he remained an active member of the Republican Conference and the Foreign Affairs and Education and Labor Committees," Brady said in a statement. "I will miss working with my friend Ron, and know I speak for the entire Texas delegation when I say we feel his loss deeply. God Bless you friend, you will be missed."

Texas GOP Chairman Allen West said he was "blessed to serve with him" in the Texas State Guard, adding that Wright was "well-respected and a man of impeccable character."

Lead Republican of the House Foreign Affairs Committee Michael McCaul and Chairman Gregory Meeks released a joint statement to explain how Wright had been "an inspiration to all around him" and was an "integral" member of the committee.

Texas Lt. Gov. Dan Patrick added that Wright had been a "great Texan."

"He worked tirelessly for the people of Tarrant County throughout his career," Patrick's statement said. "This is a loss for his district and for our great state."

Tarrant County Republican Party Chairman Rick Barnes added in a statement Wright had served his constituents "with honor and grace," and that their prayers were with his loved ones.

“Yesterday we lost a great public servant and an even better man," his statement read in part. "Ron was a true statesman and one of the most beloved political figures in Tarrant County. His legacy of is one that will live in our hearts for years to come."