TSA confiscates soldier's ashes because they were in fake bullet

Retired soldier George Tirado has lost his best friend, twice, after the TSA confiscated his platoon leader’s ashes because they were in a bullet necklace. 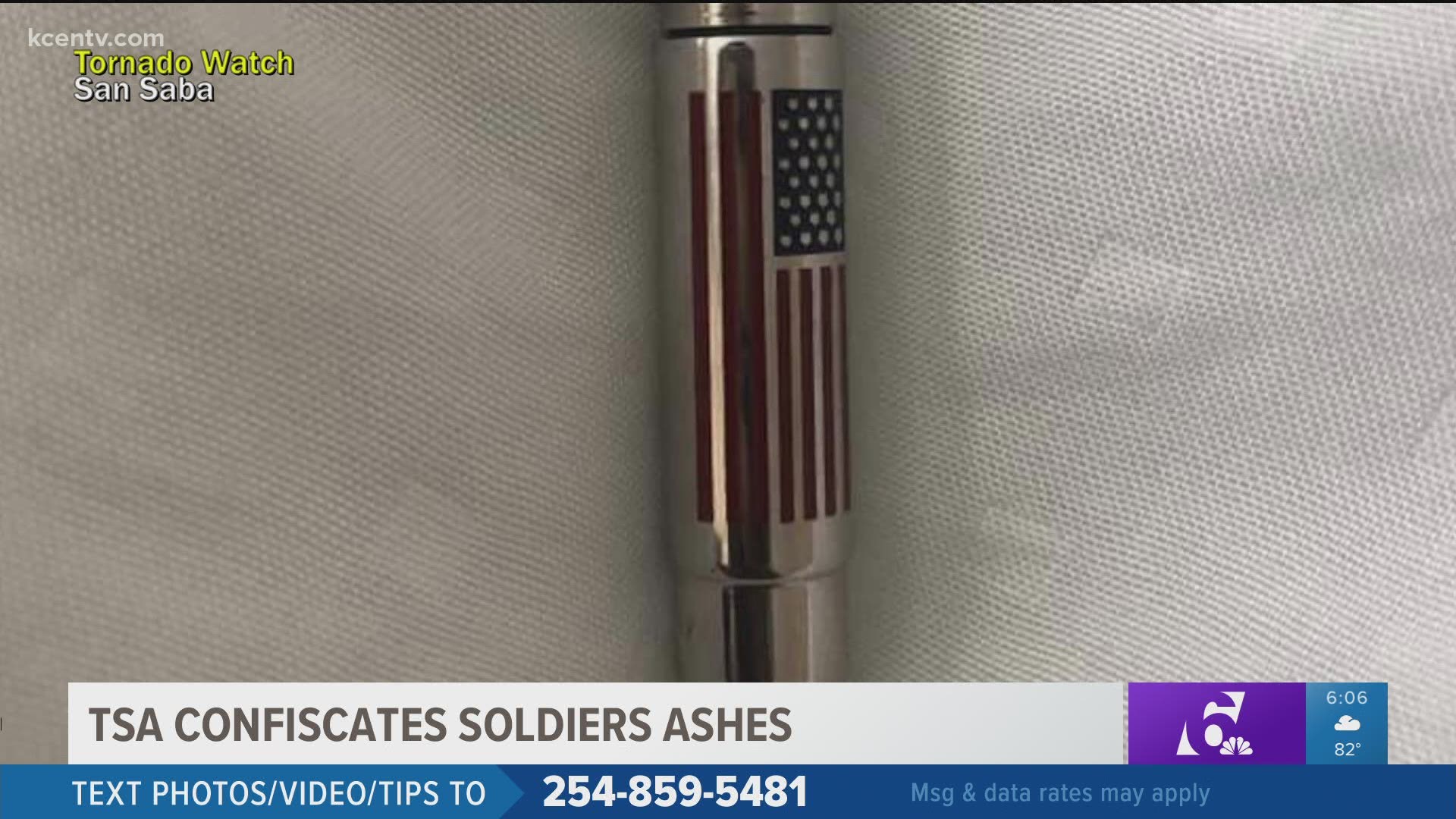 KILLEEN, Texas — Former Army Specialist George Tirado had carried the ashes of his best friend in a fake bullet necklace for over a year. Now he's not sure if he'll ever see them again.

Sgt. First Class Richard Martin had been Tirado's platoon sergeant in Afghanistan. He later became a mentor, helping Tirado though personal struggles that make him consider quitting. The men later became friends after leaving the military, with Martin even serving as the best man at Tirado's wedding.

"He helped encouraged our relationship, was a positive role model for me," Tirado said.

Unfortunately, while Martin was always willing to help others, Tirado said he also had his own struggles. Tirado said Martin had served for 18 years and had seen six combat tours. He had struggled with PTSD, though it wasn't easy to tell.

"He was the type of person that always focused on others and supported others, but never really displayed a personal struggle," Tirado said.

Martin died by suicide in 2019. Tirado carried his ashes in a fake, stainless steel bullet, connected to a chain.

"It is the most priceless item I possess," Tirado said.

Then, on April 23, going though airport security the item was flagged and ultimately confiscated by a TSA agent at LaGuardia airport in New York.

Martin said he had worn the necklace while traveling though airports multiple times. In fact, he said he had already gone though the same security line at LaGuardia's Terminal C earlier that same day.

He said his flight had been delayed a few hours, and he had stepped out of the terminal to smoke. Going though the line a second time however, a TSA officer confronted him after he put the items in a tray to go though the X-ray machine.

"The TSA officer on the other side asked if the items he held in his hand were mine," Tirado said. "He stated that the necklace was a replica item and could be confiscated."

Tirado said he told told the officer what the fake bullet contained, showed him a bracelet that also had Martin's name on it, and explained he had been on multiple flights with the necklace and had made sure it would be allowed beforehand. He said the officer called a supervisor. Tirado said he was told he could only put the item in a checked bag.

Tirado's flight was about to board in the next twenty minutes. In the end, he had to leave the item.

"The only thing that kept me composed, was the thought that my wife and daughter were waiting for me at the gate. I felt like this was so wrong," Tirado said. "I would have missed that flight (to keep it). Even though I didn't have insurance on the flight I would have missed it had I been able to."

Tirado said the supervisor detached the chain and handed it to him, but kept the bullet with the ashes. Tirado said he had not asked for the chain. He filed a complaint with the TSA, but has not heard back.

When 6 News contacted the TSA  on Wednesday, a service representative eventually provided the TSA policy concerning such items. The policy stated such items would not be returned.

"Under U.S. General Services Administration (GSA) regulations, prohibited items that are left at the screening checkpoints are considered voluntarily abandoned and will not be returned. TSA disposes of all prohibited liquids, aerosols, and gels at the checkpoint, and disposes of hazardous materials in accordance with Federal and local laws and regulations," the policy stated.

While items are sometimes discarded, the policy also revealed some were kept and, sometimes, sold by another government agency.

"TSA does not sell voluntarily abandoned property. The overwhelming majority of non-hazardous property is donated to State Agencies for Surplus Property (SASP), a public body established by each State to receive and redistribute excess Government property. SASPs and other public bodies that receive TSA donated property may further donate or sell it in various ways, including public auction or through other means, such as eBay. For more information on contacting your local SASP representative, please visit www.gsa.gov/sasp," the policy stated.

6 News attempted to contact LaGuardia Airport but a media representative did not respond on Wednesday.

Tirado said he is now reaching out to local members of Congress for help.