TSA Agent: 'I just don’t know how the government can get away with not paying us'

Agents say safety won’t be compromised, but admit working without pay is an unnecessary distraction in a job that requires focus 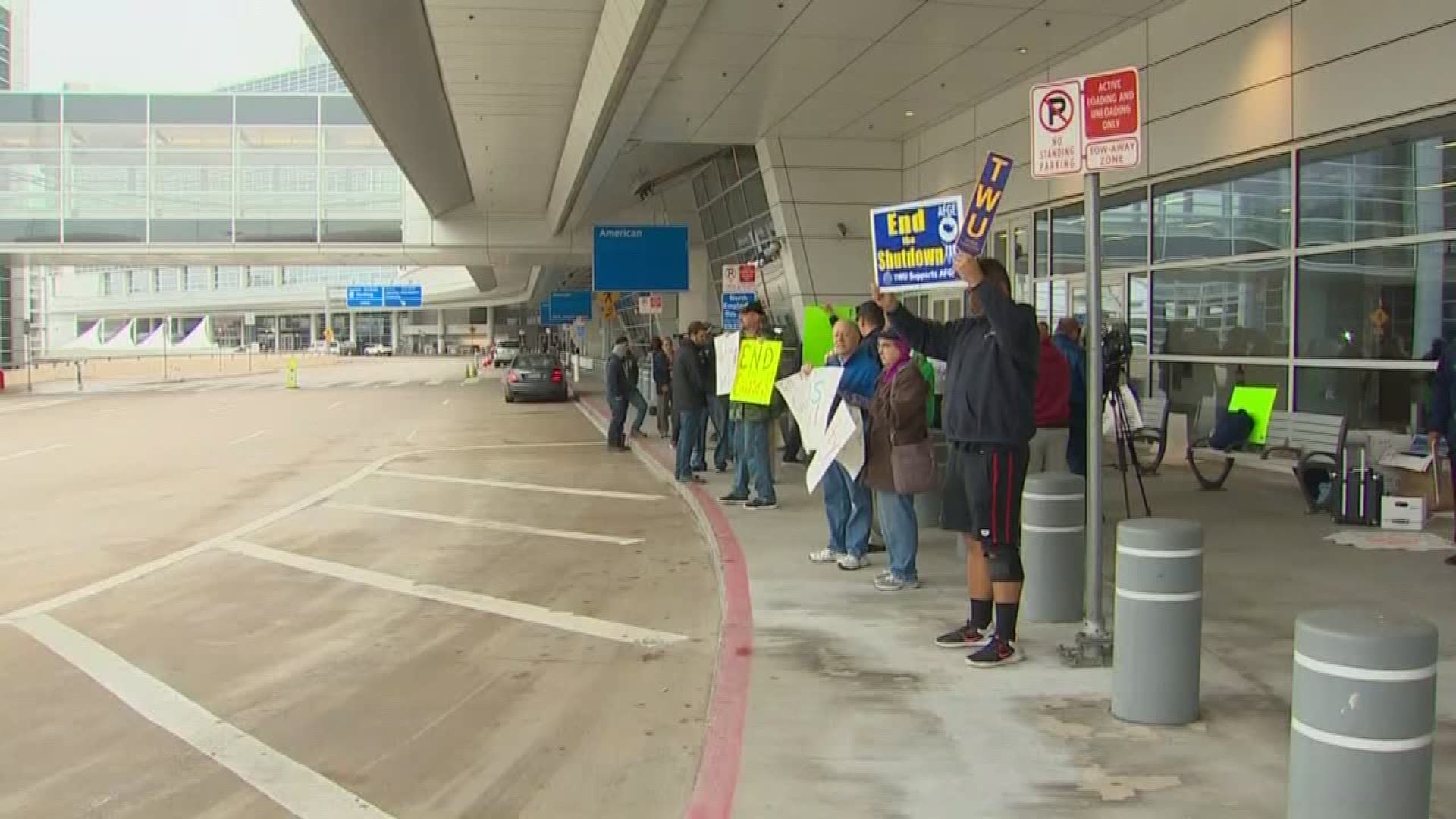 FORT WORTH, Texas — While some union colleagues rallied outside Terminal D at DFW Airport on Wednesday, hundreds of TSA agents kept doing their jobs inside.

For traveling passengers, it was just a usual afternoon flying.

But for those unpaid agents, it was the 26th straight unusual day at the office.

“Worried, stressed and frustrated, trying to figure out where I’m going to be able to pay my bills,” said Becky Mancha, a Love Field TSA agent since 2008. “I’m a very strong person. I’m self-sufficient, and I have to tell my kids, I don’t know, where it’s coming from.”

She got emotional as she talked about how hard it is to work without a paycheck.

“We don’t go out to eat anymore. I bring my lunch every day. We aren’t going to any activities or events,” she said.

Her husband is employed, but not by the federal government, so she’s more thankful than ever for his paycheck right now.

There are between 1,400 and 1,500 TSA agents in North Texas working at DFW Airport and Love Field. None of them know when they’ll be paid.

“It’s not fair for us to be expected to do this,” said Johnny Jones, a TSA agent at DFW Airport and the AFGE Local 1040 treasurer.

“There’s a lot of people I work with in more difficult positions than me - facing evictions from their apartments, things of that nature, can’t make their car payments. Creditors aren’t always willing to work with you, even if we have a letter from the government saying we are federal workers and we aren’t getting paid.”

Jones and Mancha say they keep going to work because they know their coworkers depend on them.

AFGE Local 1040 president Rudy Garcia said there’s been a wave of sick calls by agents at large airports across the country, but he’s encouraged local agents not to call in sick. He said it just causes colleagues to work longer hours without getting paid.

TSA agents were joined by several other federal workers who have been either furloughed or working without pay since December 22, like Sara Frey, an EPA scientist in Dallas who has a PhD in Chemistry.

Frey is furloughed. She bought a home in June and has a 22-month-old daughter. She said her husband is picking up extra shifts at his work to help cover their costs.

Rallying alongside the federal workers were some American Airlines flight attendants who are members of the Association of Professional Flight Attendants union.

Alana Billingsley said to not pay federal employees who remain on the job is criminal.

“It really does cause security concerns and after September 11, flight attendants know we can’t be the first line of defense for security,” she said.

“I don’t worry that any of them would be less than professional,” she said of TSA agents, “but what I worry is that there aren’t enough of them and that they’re having to take other jobs. They’re not able to put gas in their fuel tanks. I worry that we’re losing great people because the government’s not paying them their paycheck.”

A few American Airlines pilots appeared at the rally as well.

Captain Dennis Tajer is chair of the communications committee for the Allied Pilots Association, the union representing American Airlines pilots.

Tajer said he wasn’t there to pick political sides, but to stand with the men and women who are coming to work despite the shutdown and upholding the standard that is demanded of them.

“Just as I do in the cockpit, if I have a crew member that I can sense may have a little distraction going on, perhaps something at home, and I think it’s distracting from their duties, I’m going to call attention to it and ask how I can help, and that’s what we’re out here doing," Tajer said. "How can I help?”

Jones said the shutdown is a distraction, but that he and his colleagues remain committed.

“I know what the mission is and I’m going to come to work with 100 percent focus to do this job,” he said.

“It’s my job. I came on with TSA and the first thing I was told is that I was there to make sure the public was safe and I want to continue to do that,” she said.

Tajer said the public shouldn’t worry about safety being compromised.

“Our passengers can rest easy. We’ve got your back,” he said. “That airplane doesn’t leave unless it’s safe and secure, and that will never change.”