Tinslee's health problems require her to be hooked up to machines to breathe and eat. 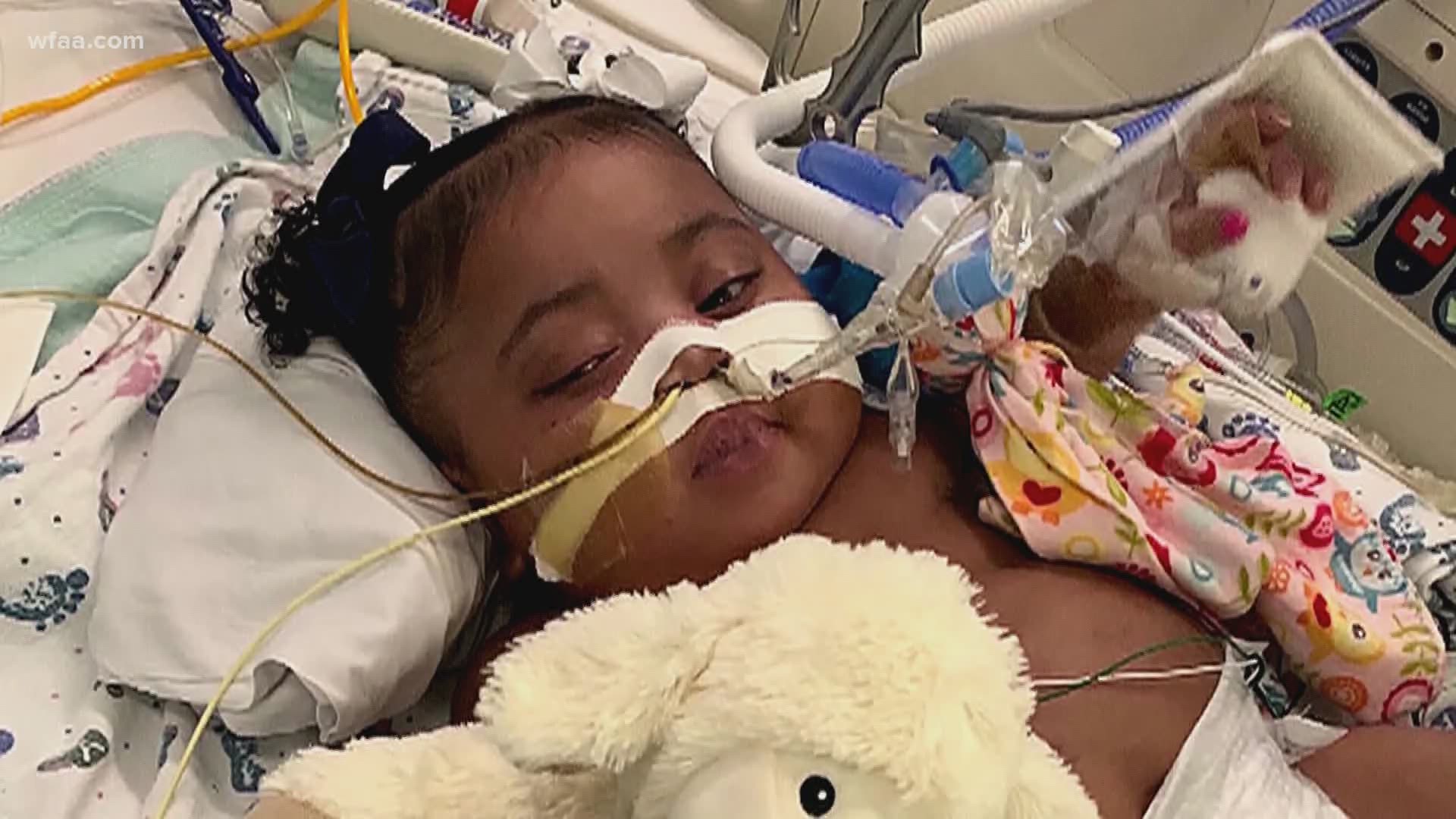 The video above is from July.

The mother of a 1-year-old Tinslee Lewis disputes claims made in a recent court filing by Cook Children's Medical Center saying they "don't tell the truth" about the baby's condition.

Tinslee has been hospitalized since birth with grave lung and heart problems. She is hooked up to machines in order to breathe and eat.

The hospital wants to end her medical care.

On Tuesday, attorneys for Cook Children's asked the Supreme Court of Texas to make a ruling soon because Tinslee's condition continues to worsen, according to a supplement to an emergency motion.

"Cook's recent court filings don't tell the truth about my little girl’s condition and show Cook's will say anything to have my daughter’s life ended," Trinity Lewis said in a statement Thursday.

Doctors and nurses in the court documents say Tinslee cannot eat solid food, has one to two teeth and cannot cry due to the medicine and treatment that the Fort Worth hospital has been court-ordered to continue.

The documents hope to expedite the review process from the Supreme Court of Texas because of Tinslee's "ongoing, daily agony."

"First, these issues are appropriate for a full trial (so both sides have a chance to present evidence), but a full trial has not happened yet," said Kimberlyn Schwartz with Texas Right to Life, which has been advocating for and with the family.

The documents said that Tinslee is alone and isolated a majority of the time, except for medical staff.

The baby's mother disputes that. She said in a statement that she visits her daughter "every single chance I get."

She said the hospital's visitation rules are "very strict." She says she has fought the hospital on which relatives can visit Tinslee.

"Cook's will not allow me to visit Tinslee while bringing my baby daughter. As a single mother working two jobs, I have to find a babysitter so I can see Tinslee," Trinity Lewis said.

Since April 13, only one caregiver was allowed at Cook Children’s per patient because of safety precautions due to the COVID-19 pandemic.

A motion was filed in July, saying that a doctor reviewed Tinslee's medical records and believes her condition is treatable.

"It opens up the possibility of having Tinslee transferred to another facility. Cook’s will not try to perform the procedure," Schwartz said.

At this time, Tinslee is not allowed to be moved from Cook Children’s Medical Center without the hospital agreeing to emergency privileges for a doctor to perform a tracheostomy and providing care following the procedure, according to court documents filed in July.

Tinslee has required deep sedation and chemical paralysis for over a year to "facilitate mechanical ventilation, decrease the pain caused by daily cares, and mitigate events that can lead to significant deterioration in her condition," the recent court documents said.

"Since the temporary injunction hearing in December 2019, T.L.’s suffering has only increased, as her incurable disorders, combined with the effects of forced paralysis for months on end, have ravaged her small body," the documents said.

"She cannot recover from these disorders and has no chance of long-term survival," her primary doctor, Dr. Jay Duncan says. "Her medical problems and daily suffering, however, have only increased since last year."

Because of her treatment, Tinslee has never eaten solid food and has not developmental milestones like an average baby.

In July, the Second Court of Appeals granted a temporary injunction to keep Tinslee alive in Fort Worth.

The move reversed a lower court decision that denied the mother's request for a temporary injunction to keep Tinslee on her life-sustaining treatment.

The court's opinion says a lower court should grant the mother's injunction pending "a final trial on the merits consistent with this opinion."

The decision is another step in the legal battle between the hospital and Tinslee's family regarding the continuance of her medical treatment.

Tinslee will be 2 years old in February.