'The legal system is proceeding': Courtrooms across Texas go virtual due to COVID-19

Judge Eric V Moyé believes the flexibility offered by virtual hearings makes it likely they will continue in the future, beyond COVID-19. 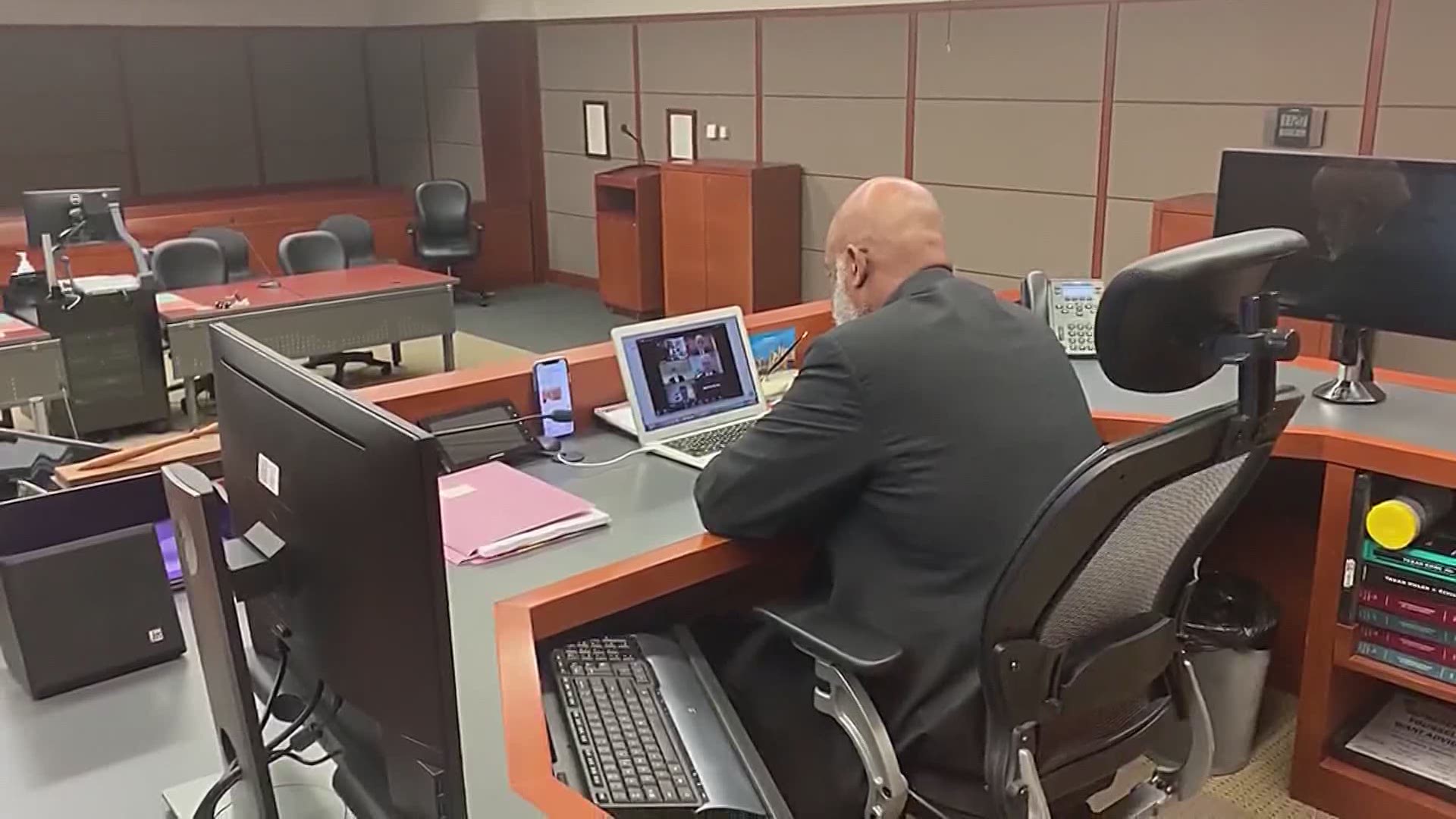 After Gov. Greg Abbott called a state of emergency on March 13, the Supreme Court of Texas issued their own emergency orders. To slow the spread of COVID-19, most in-person proceedings -- no matter the size -- were delayed until June 1.

But the business of the courts continues.

“Things are still happening, and people still need to seek redress in the courts,” said Judge Eric V. Moyé, presiding judge of the 14th Judicial Court of Texas. “And so the challenge became, how do we continue to operate?”

The Supreme Court of Texas and the Office of Court Administration in Austin issued a new system to guide court operation. Hearings were held virtually on Zoom, judges could swear in witnesses remotely, and courts began making their own Youtube channels.

District courts issued their own orders. Moyé worked with the district judges on the Dallas County District court to create a standing order to streamline their practices across the board.

While there is still a restriction on jury trials, Moyé says he’s able to hear most of his civil cases remotely.

“The hardest working judges here may try 30 to 35 jury trials a year, so that means that 90 to 95% of the cases that get filed get resolved at some point in the system prior to a trial by jury,” said Moyé. “We’re making sure that those opportunities are still being heard on a daily basis.”

“We’re always concerned anytime that school is not in session on CPS cases.” McCraw said. “We want to make sure that there are eyes on those children that need to be protected.” 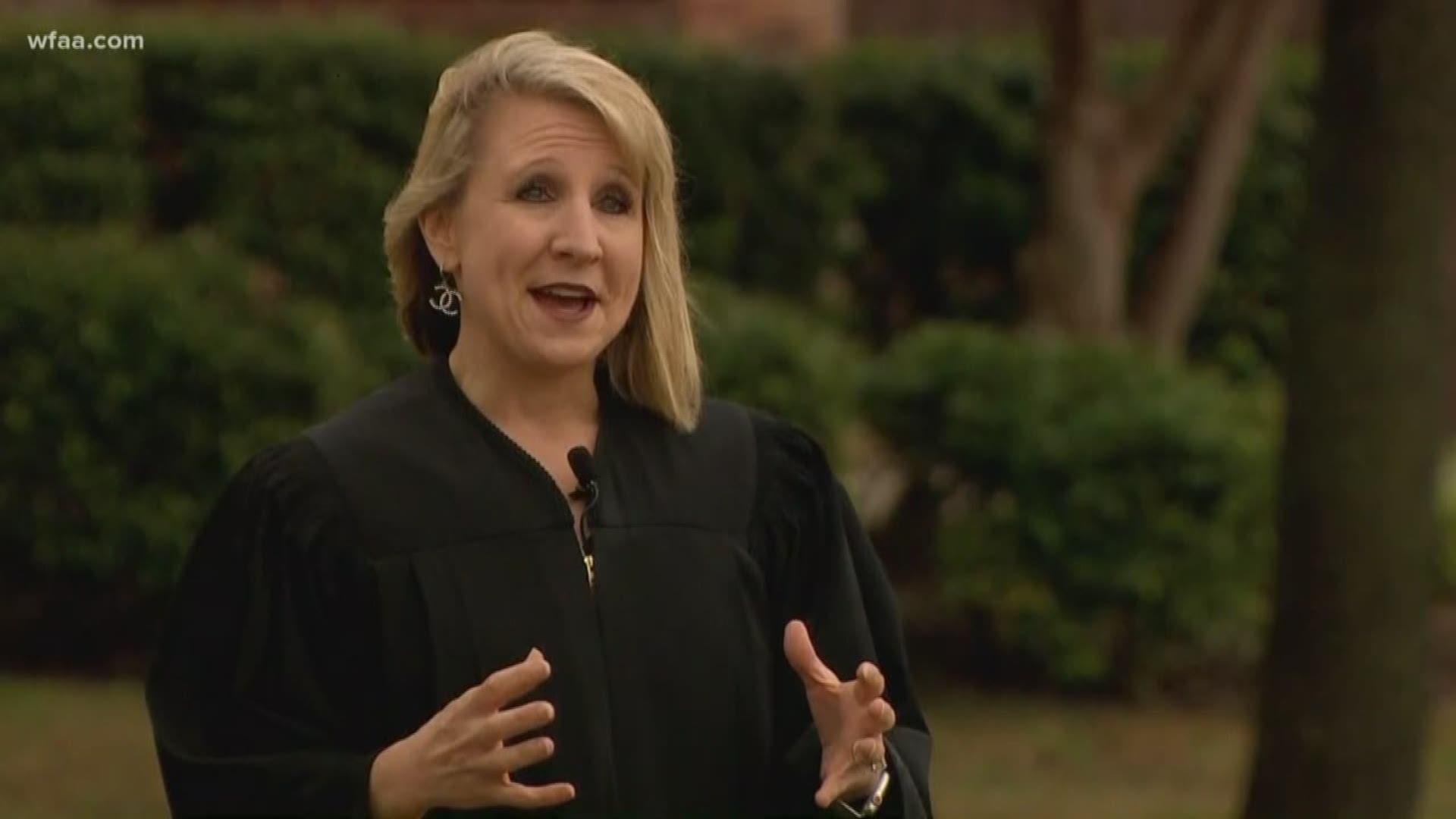 Are virtual hearings here to stay?

Moyé says electronic proceedings bring unique pros and cons. He misses having direct contact with lawyers. He finds it easier to read the body language of witnesses and lawyers in person, and for them to read him.

Still, the Zoom proceedings are efficient. A commute could make it difficult for a lawyer to appear at three hearings in three separate counties.

And where the lawyer is out of state, virtual hearings significantly cut travel costs, potentially trickling down to lower legal fees.

“I’ll bet you that next year this time that half of the hearings I have will be done via Zoom or via some other technological platform,” he said.

Jury trials still pose a problem. Juries require twelve people, while many counties are still restricting gatherings to ten or less. The Supreme Court of Texas has delayed jury trials until further notice.

Furthermore, the process of jury selection requires dozens of people to gather in the courtroom at once. Even if the restrictions were lifted, Judge Robb Catalano, presiding judge of Criminal Court District 3 in Tarrant County, doubts people would be willing to put themselves at risk.

“We’re trying to come up with a plan where everybody feels safe and where jurors will come down and serve, because right now I don’t think people would want to show up and sit shoulder to shoulder in a crowded courtroom,” said Catalano.

In an update on May 4, The Office of Court Administration (OCA), extended its restriction on jury trials beyond June 1. Courts are now ordered to delay jury trials “until further guidance is issued.” The OCA anticipates that will be sometime in the summer.

“It’s going to be super busy for the rest of the year trying to get those cases heard," said Catalano. "Since we haven’t been able to have the public in the courtroom, the cases are stacked up and we’ll have to get to them as quickly as possible as soon as we’re able to.”

While jury trials make up a small percentage of the total cases his criminal court hears each year, Catalano says this doesn’t reflect their significance. The prospect of a looming jury trial can motivate people to come to a resolution. Oftentimes parties aren’t forced to decide their issues until they know a jury is in the hallway.

“Having that possibility really drives the criminal justice system. The old saying is ‘justice delayed is justice denied.’ So that’s kind of where we’re at at this point,” he said.

For defendants who can’t afford bail, delayed jury trials could mean months longer in jail. To address this, Tarrant County set up a system to conduct bond reduction hearings and plea hearings remotely. Cameras are set up in jail, lawyers are at home, and judges often conduct hearings from court.

The goal, says Catalano, is to ensure the most pressing issues are resolved.

“Really, we’re trying to conduct essential business so if it has to do with somebody potentially getting out of jail or resolving a serious case that would provide justice to the victim or an agreeable sentence to the defense we’ll go ahead and do that remotely,” he said.

Virtual bond reduction hearings also help with another problem—overcrowded jails. As cases pile up, so does the number of people waiting for their day in court. Reducing bonds allows some of those people out of jail to wait from home.

It’s a difficult decision that Catalano says they weigh on a case-by-case basis.

As the governor rolls out his plan to reopen Texas, the Supreme Court of Texas continues to assess the best way to reopen courthouses. The latest update outlines how each court must create a safety plan before they can commence in-person hearings.

It’s another step in how the courts are adapting during a time of uncertainty.

RELATED: Hello, justice, do you hear me? Supreme Court meets by phone