Jeff Bezos and three others are scheduled to go into space Tuesday. 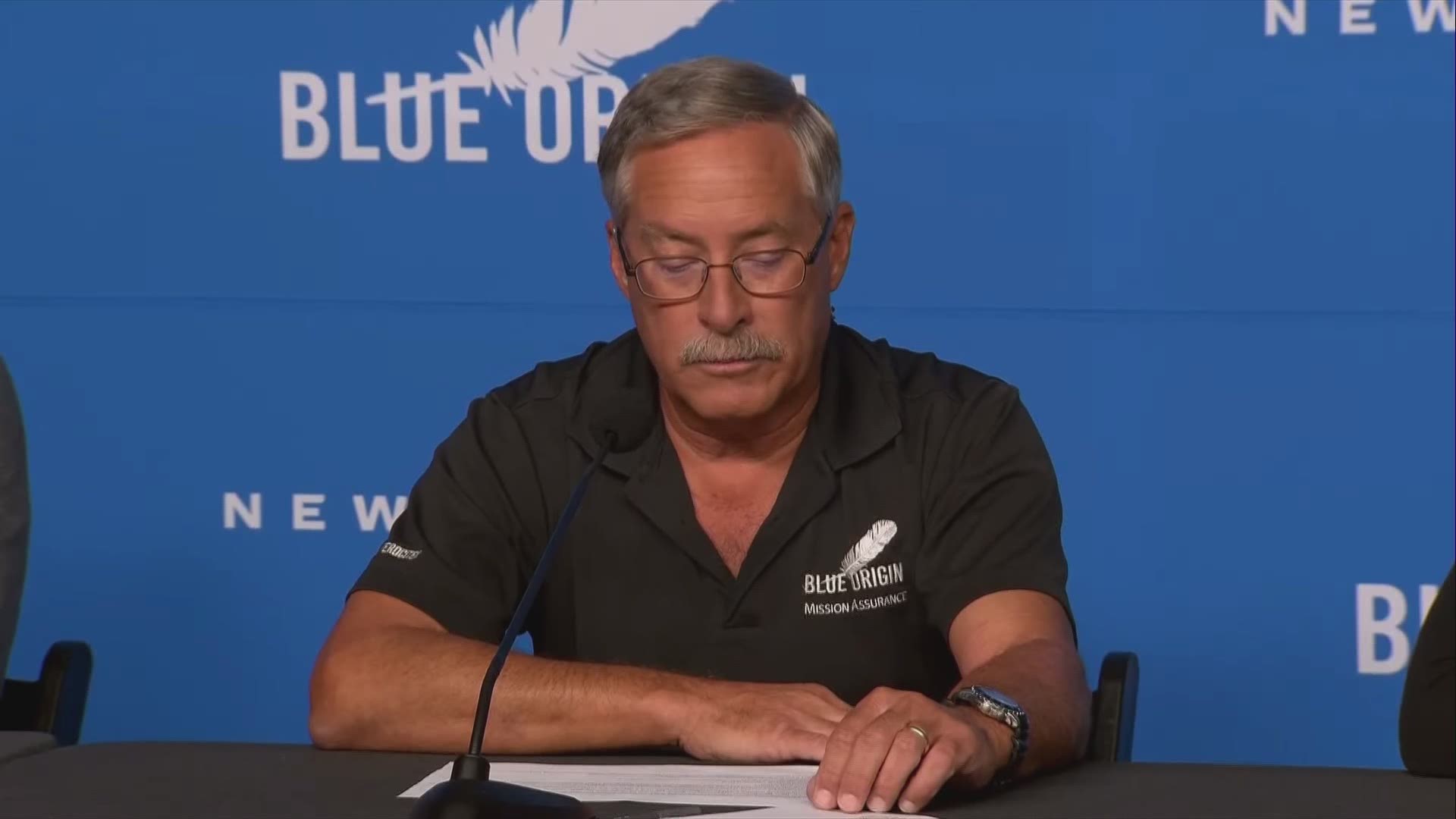 VAN HORN, Texas — Blue Origin is confident weather will not be an issue Tuesday morning, when the company launches founder Jeff Bezos and three others into space, crew members said during a pre-launch press conference Sunday in West Texas.

"The weather forecast currently shows a slight chance of rain and thunderstorms in the early morning hours on launch day, which clears in time for our launch window with light winds and temperatures in the 70s," Blue Origin Flight Director Steve Lanius said.

They will send weather balloons out Monday to test the upper-level winds but believe any rain or storm will be cleared before the early morning launch window.

Follow the mission: Here's what you need to know for Tuesday's launch

"The upper-level wind forecast is favorable for launch. We will be confirming this with weather balloon releases tomorrow and on launch day. Weather is currently not a constraint to launch," Lanius added.

When Blue Origin launches people into space Tuesday for the first time, founder Jeff Bezos will be on board.

No test pilots or flight engineers for Tuesday's debut flight from West Texas, just the founder of Amazon, his brother, an 82-year-old aviation pioneer and a teenage tourist. The capsule is entirely automated, unlike Richard Branson's Virgin Galactic rocket plane that required two pilots to get him to space and back a week ago.

The billionaire rivals are gearing up to launch anyone willing to shell out hundreds of thousands of dollars for a brief space hop. The 18-year-old will become the youngest in space and the 82-year-old the oldest.

"Blue is tackling foundational building blocks -- the technology, the people, the processes & the infrastructure needed to truly lower cost for access to space and enable a near-term future where people live and work in space for the benefit of Earth," Blue Origin CEO Bob Smith said.

Blue Origin plans to have two more flights in 2021 for a total of three flights and many more to come in the future.

"So we've already built a robust pipeline of customers who are interested," Vice President of Mission and Flight Operations Audrey Powers said.

Touchdown #NSFirstHumanFlight #KHOUTexasTakeoff Took all of 12 hours, but we made it. @KHOUSergioSoto couldn’t wait to pull out his camera & get some shots of @blueorigin Launch Site One. @KHOU #NewShepard pic.twitter.com/AzSAHZQRex

RELATED: How the Blue Origin and Virgin Galactic ships compare

In the meantime, Lanius said the crew is finishing up astronaut training and he's confident everyone will be prepared for the big launch.

Since Blue Origin came to Van Horn, Texas, the company has been met with great support.

"We have a lot of visitors here in Van Horn. This West Texas town has been our home and our support structure for as long as we've had this program active," Powers said.

Unfortunately, after years of waiting for the company's first manned launch, there are no designated public viewing areas for the flights.

"There is very little infrastructure out here and not really any public facilities to handle crowds," Powers said.

Powers added the one state highway running adjacent to the launch site will be closed.