"This legislative session will not end until we fix these problems and we will ensure that the tragic events of the past week are never repeated," Abbott said. 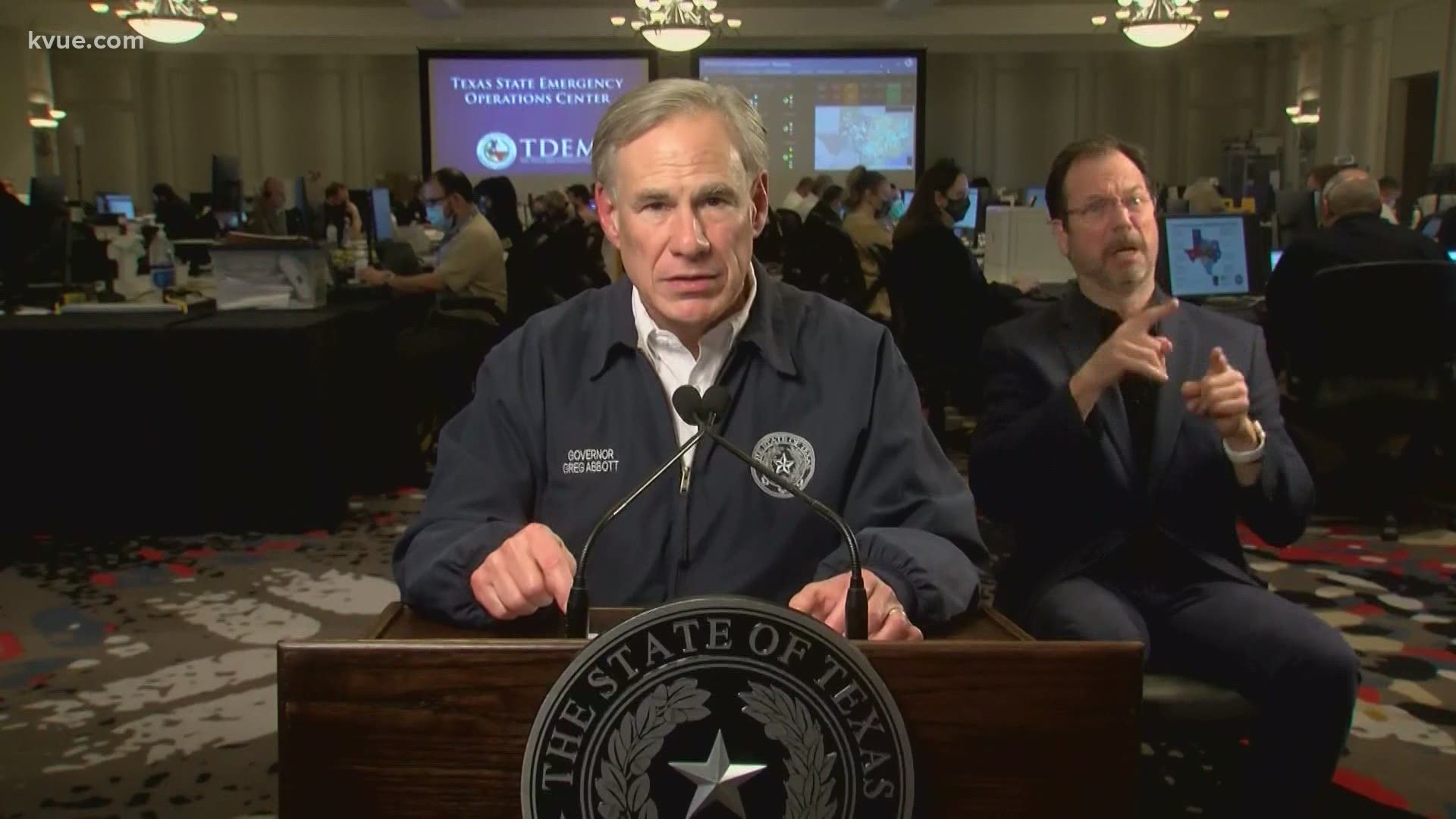 The crippling weather led to power and water outages for millions across the state last week, which ultimately led to a yet-to-be-determined amount of deaths statewide.

"Tragic does not even begin to describe the devastation and the suffering that you have endured over the past week. Too many of you were shivering in your own homes, no power, no heat, no water," Abbott said. "I want to thank the countless Texans who stepped up to help those in need. As is often the case, the worst of events brings out the best in Texas."

The governor said the State of Texas will be using "every possible resource" to fix the problem.

"Many of you are angry and you have a right to be," Abbott said. "I'm angry, too, at a time when essential services were needed the most. The system broke. You deserve answers. You will get those answers."

The governor stated that the Electric Reliability Council of Texas (ERCOT), which manages the flow of power across the majority of the state, assured the government that it was prepared for the storm.

"Those assurances turned out to be false," Abbott said. "We now know that power generators of all sources were not prepared for this severe winter weather. We have also learned that ERCOT operators should have acted quicker to stabilize the grid and to prevent power generators from being knocked offline."

The governor said it is now time to take these lessons learned and the anger Texans feel and "channel them into immediate action."

Previously, the governor announced that he would be making the power outage situation an emergency item during this legislative session. In doing so, he will be calling for an investigation into ERCOT and to develop a solution to make sure the state never experiences such a catastrophic disaster again.

On Wednesday, Abbott said he is now working with Lt. Gov. Dan Patrick, Speaker of the House Dade Phelan and the state legislature on immediate actions.

"First is protecting you," the governor said. "It is outrageous for residents to be saddled with skyrocketing power bills, the State is already investigating multiple electric providers about these spikes. Also, we have ordered that Texans will not have their power shut off because of unpaid bills until the legislature has time to act on this."

The governor also stated that ERCOT must be overhauled.

"Five ERCOT board members have already resigned, including the chair and the vice-chair, but more must be done tomorrow," Abbott said. "The state legislature begins comprehensive investigations of ERCOT. And I am already working with the legislature on reforms to add more power to the grid and to ensure that we never run out of power again. Also, the Office of Attorney General has launched a formal investigation into ERCOT."

The governor said he has also made it a legislative priority to mandate and fund the winterization of the Texas power infrastructure to protect the power grid from future weather events.

"The fact is power generation from all sources buckled under the harsh freezing winter weather that includes natural gas, coal, nuclear, as well as wind and solar. Each of these power sources failed to fully produce because of inadequate safeguards," the governor said.

In closing, Abbott promised that the current legislative session will not close without fixing these issues.

"No words, no words can fix what happened or ease the pain that you have endured," he said. "But I assure you of this: this legislative session will not end until we fix these problems and we will ensure that the tragic events of the past week are never repeated. Your safety is my top concern, and I pray that God continues to bless you all."

The Texas House's State Affairs and Energy Resources Committees will be discussing the blackouts, the contributing factors and the response on Thursday during a public hearing.

State Rep. Donna Howard (D-Austin) spoke to KVUE ahead of the address on Wednesday. She's part of the State Affairs Committee and will be part of the hearings on Thursday.

"We're going to have to put some things in place and spend some time investing in infrastructure, looking at the cost structure," she said. "Companies come here because we have cheap power. But that is not OK if the cheap power means that Texans die and that's what we just saw. So I think it's going to be incumbent on us to look at what is the the market structure we have, how do we want to set this up?"

She adds that public comment will be useful during this time.

"This isn't going to be solved tomorrow. We're going to keep looking at this. So we're going to need to keep hearing from folks so that we can see how how best to meet those needs. So I encourage anyone who has something to say, submit that, please," she said.

The legislature is accepting written public commentary from Texans impacted by the storms. Click here for more information.

"Members of the board of ERCOT resigned for their failures and Greg Abbott should follow. He is the head of the state. He is responsible for this crisis.

Abbott’s lack of foresight and inability to manage this crisis is part of a repeated pattern. He didn’t take action when Texans were displaced during Hurricane Harvey, he refused to plan appropriately for the coronavirus crisis, his handling of vaccine distribution has been abysmal, and now, in Texas’ time of greatest need during this winter storm, his incompetence is once again on full display. This isn’t partisan politics. This is a question of his basic ability to do the job he was elected to do. We’ve given Abbott chance after chance to prove that he can manage our state government and he’s failed to answer the call every single damn time.

While Texas Republicans were fleeing the state or fleeing their responsibilities, Texas Democrats were rebuilding our communities and going neighborhood by neighborhood to help those in need. That is real leadership. The next question needs to be what did Greg Abbott know and when did he know it. Abbott must be held accountable for his failures to manage the state every single time. Texans are angry and we will hold Abbott accountable at the ballot box in 2022."

COVID-19 mass vaccination site to open at COTA this weekend

VERIFY: Did some Texans have sky-high electricity bills after recent winter storms?