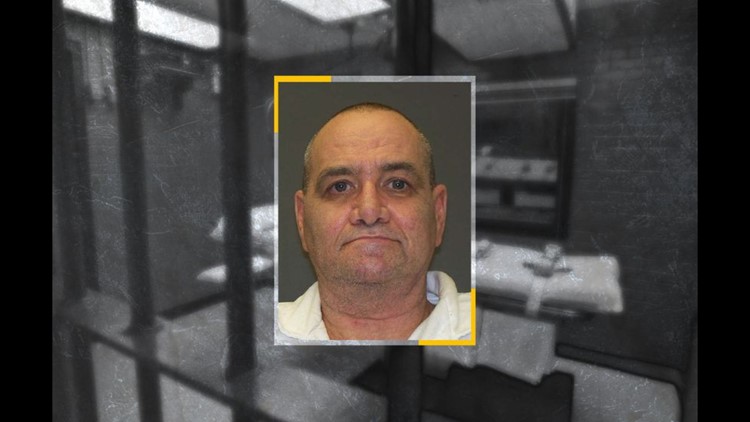 Photo by: Texas Tribune via TDCJ
John Gardner was sentenced to death for the 2005 murder of his estranged wife, Tammy Dawn Gardner.

From the Texas Tribune:

Texas, the state that has put to death more people than any other by far, carried out the nation’s first execution of the decade Wednesday.

John Gardner was executed for the 2005 Collin County murder of his soon-to-be ex-wife. Tammy Gardner was shot and killed in her home weeks before the couple’s divorce was finalized, according to court records. She called 911 before she died to say her husband had shot her.

With no pending appeals, John Gardner was taken into Texas’ death chamber in Huntsville and injected with a lethal dose of pentobarbital at 6:20 p.m. He was pronounced dead 16 minutes later.

Five of his friends and a spiritual adviser were expected to watch through a glass pane in a small room, according to a prison witness list. Tammy Gardner's mother, daughter and son planned to stand in an identical room next door. In his final words, he told his friends he loved them after apologizing to the victim's family.

"I would like to say sorry for the grief I have caused. I hope you find peace, joy and closure. Whatever it takes to forgive me. I am sorry. I know you cannot forgive me, but I hope one day you will," the 64-year-old man said.

John Gardner had a history of domestic violence, including the shooting of a previous wife who later died from her injuries, court records state.

He had argued for years that his crime should not have been prosecuted as a capital murder, which is the only crime in Texas that can result in the death penalty. A capital murder conviction in his case required the jury to decide that the killing was committed during another felony crime — home burglary or retaliation for his wife being a witness in their upcoming divorce proceeding.

Instead, his appellate attorneys said, John Gardner’s trial lawyers should have raised an “abandonment rage” defense. They argued that he didn’t break into his wife’s house and that he shot her to prevent her from leaving him, not because she was going to testify against him in court. Texas and federal courts rejected the argument.

The Gardners had been married for more than five years, and court records indicate it was an abusive relationship. Tammy Gardner’s friends and relatives testified at trial that her husband had put a gun to her head before and that she showed up to places with bruises on her face. After she filed for divorce, they said that she was terrified for her life and that John Gardner was harassing her, asking if she was going to go through with it.

The day of the murder, her daughter said John Gardner was repeatedly texting his wife about the divorce and asked, “YES OR NO?”

At trial, while jurors weighed whether to sentence John Gardner to death or life in prison without the option for parole, his sister testified that they had grown up with abusive parents. Their father, a Baptist preacher, would interrupt church services to loudly beat his son with a belt in the hall, she said. John Gardner's appellate attorneys later said trial lawyers didn't properly search for other evidence that could have turned the jury toward life.

The slaying wasn’t John Gardner’s first domestic violence conviction. Three of his previous four wives had also reportedly been abused by him, according to a federal court ruling. In 1983, he was convicted of aggravated assault in the shooting of his wife at the time, Rhoda Gardner, who was pregnant and later died from her injuries. He served two years of an eight-year sentence in Mississippi. After two years on parole, he was again imprisoned after being accused of assaulting his new wife’s daughter, who required hospitalization, and kidnapping his wife at knifepoint.

His appellate lawyers argued most recently to the U.S. Supreme Court about the abandonment rage defense. They said lower courts had wrongly rejected such claims.

“[John Gardner’s] violent domestic history further supports the fact that he abused or killed his former spouses and their children ‘to manage his relationships,’ and not because of their status as a prospective witnesses who would testify against him,” his attorney, Lydia Brandt, wrote in a petition. “The killing of Tammy Gardner was an estrangement killing — which is not a capital murder offense.”

If he had been convicted of murder, not capital murder, the harshest punishment he would have received is life in prison. The Texas Attorney General’s Office argued to the high court that John Gardner killed his wife because of the upcoming divorce, where she was a prospective witness, and not earlier at the time of the breakup.

John Gardner’s appellate attorneys also said the lack of evidence of a forced entry showed that he wasn’t committing a burglary, the other felony that could trigger the capital murder offense. The state argued Tammy Gardner’s 911 call and her fear for her life indicated she would not willingly let him into her home.

“In fact, uncontrollable rage triggered by abandonment makes it more likely Gardner entered Tammy’s home without her effective consent and for the purpose of harming her,” wrote Texas Assistant Attorney General Matthew Ottoway.

Texas has seven more executions scheduled through May.

The Texas Tribune is a nonpartisan, nonprofit media organization that informs Texans — and engages with them – about public policy, politics, government and statewide issues. This story was first published at this link.