The head of the besieged and understaffed Child Protective Services says he needs at least 550 additional front-line workers to fix a system that results in CPS investigators routinely missing deadlines to see thousands of children at risk of abuse or neglect. 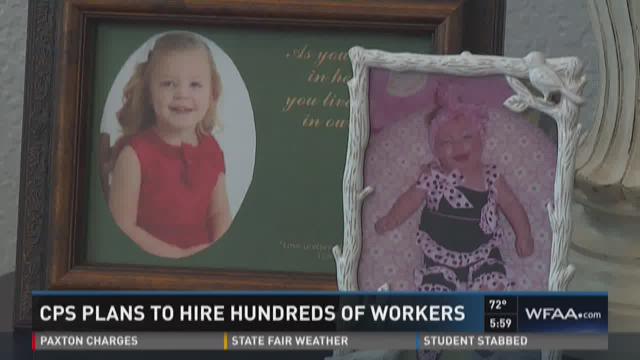 The head of the besieged and understaffed Child Protective Services says he needs at least 550 additional front-line workers to fix a system that results in CPS investigators routinely missing deadlines to see thousands of children at risk of abuse or neglect.

"My expectations are not being met,” Hank Whitman, the commissioner of the Texas Department of Family and Protectives Services, wrote in a letter to the state’s top leaders. "This is unacceptable."

Whitman is a former law officer who was appointed earlier this year with a mandate to fix the troubled CPS system.

His letter to the state’s top leaders – Gov. Greg Abbott, Lt. Dan Patrick and House Speaker Joe Straus – came eight days after they sent him a letter demanding an action plan. The state's top leaders have been embarrassed by recent reports that CPS investigators missed deadlines to see thousands of children at high risk of abuse or neglect.

Their letter called it critical that children "are seen in a timely manner” and said “anything less is unacceptable.” They demanded an action plan that would “proactively prevent additional lapses in the required face-to-face visitations and interventions.”

In his letter, Whitman acknowledged that CPS “is struggling to meet the timeframes for initial contact and timely closure” in North Texas, Harris County and Travis County. His letter outlines a plan to add the vast majority of those new 550 workers to those areas. About 165 would be allocated to North Texas.

The plan includes hiring an additional 100 CPS special investigators to add to the current total of 179. They are former law enforcement officers and the hope is that they can help with the most “complex and serious cases and when a child or family cannot be located,” his letter said.

Whitman’s hiring plan would cost the state about $53 million in the current budget year.

“There's a lot more public pressure on CPS right now and for our leaders those in office to get things done, to make the system work,” said Doug Reeves, an outspoken advocate of CPS reform. “It is not working right now.

He got involved after the murder of his granddaughter, 2-year-old Grace Ford. She was suffocated in 2014 by her father’s girlfriend in Plano. Reeves and his wife had begged CPS investigators to intervene prior to Grace’s death.

Reeves said he has been in contact with Straus and other top leaders. He said he’s hopeful that this time state leaders really intend to reform the system.

“It looks like they have a plan now,” he said. “That’s a lot better than before.”

Akaiya Thomas, a former Dallas County CPS investigator, is skeptical that promises of reform this time will be any different.

“It’s the same old song. It’s been going on for years,” she said. “Workers have been voicing their concerns, their frustrations, their ideas but it doesn't seem that any of that makes it back to the drawing board back in Austin.”

Thomas, a single mother of a young daughter, quit last year amid the chaos that descended on Dallas County CPS as workers fled and caseloads stored. She says she could no longer tolerate the unrelenting demands of the job.

“The support is not there,” she said. “What have you done to change the system that these caseworkers have to work in?”

Whitman's letter makes no mention of raising the pay of CPS workers, and state leaders had no indicated an interest in raising pay. In some cases, pay can be as low as $34,000 a year.

If CPS wants to hire and keep quality workers, they’re going to have to pay more, Thomas and child welfare advocates say.

“It's foolish to overlook that and think we can just get by not paying these people,” Thomas said. “What's going to happen is that people are going to continue to leave for better opportunities, better paying opportunities.”

Dimple Patel, who works for the child advocacy group Texas Protects, said they were pleased to see a hiring plan to confront the worker shortage that had resulted in children not being seen in a timely manner. But she said that they are concerned the plan does not address increasing pay, which is one of the biggest reasons that workers quit.

“We’re not recruiting the best and the brightest because the starting pay is too low,” said Patel, a former CPS child fatality investigator. “We’re asking them to make life and death decisions .. and we don’t unfortunately pay them what they deserve for that hard work.”