'We're all exhausted': Texas doctors working to get patients to other states for abortions, as out-of-state clinics fill up

Dr. Moayedi works in clinics in other states. She said one of them is already booked through September with women from Texas. 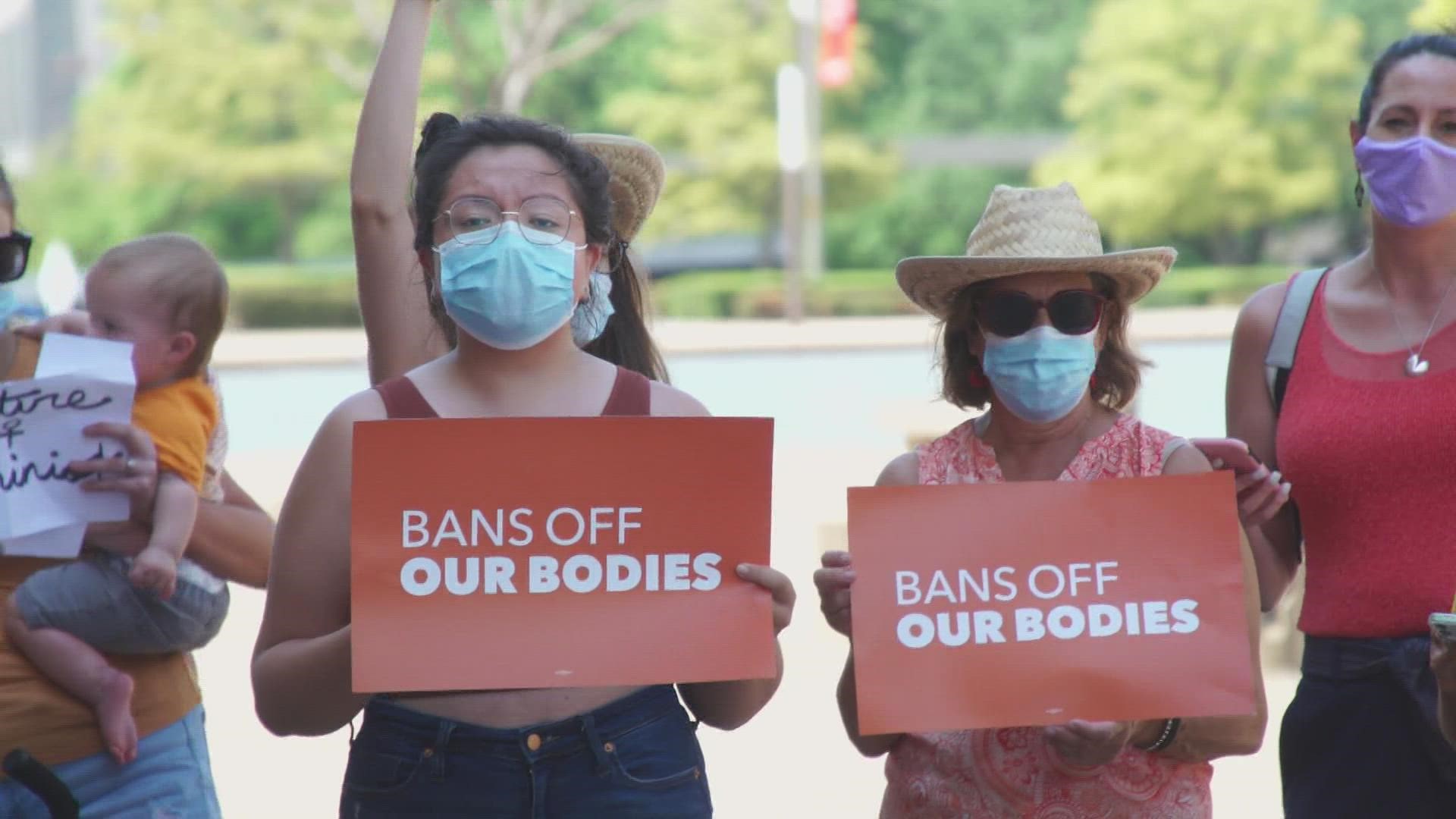 DALLAS — Less than four hours before Texas' new abortion law went into effect Wednesday, Dr. Ghazaleh Moayedi and her colleagues were working -- knowing they were running out of time.

"At 8:30 at night, I got a call asking if I could help at another clinic because there was 30 patients left that needed to be seen before midnight," said Moayedi.

The OB/GYN is one of many across the state that have been preparing for the new abortion ban since it was introduced in the legislature earlier this year.

Between undergraduate education, medical school and residency, Moayedi has spent more than a decade studying to be an OB/GYN. She also spent those years in Texas. She said, from a medical standpoint, she is concerned about what this new law means for women.

This week, a number abortion funds, women's health centers and advocacy groups in North Texas spoke out against the law. On Friday, the Texas Medical Association released a statement denouncing the law and calling it unconstitutional.

“The physicians of Texas never thought the day would come when the performance of our oath would create a private cause of action for persons not connected to or harmed by the action."

The lines refer to the part of the law that allows for private citizens to take legal action against anyone they suspect of helping a woman get a now-illegal abortion after six weeks of pregnancy.

This week, Texas Right to Life's vice president, Elizabeth Graham, told WFAA that this enforcement mechanism was a strategy to help the law stand up in court.

RELATED: Texas' abortion law is in place. Here's how both sides are moving forward.

Moayedi said, even before this law, abortion providers were at risk for offering services after the restrictions Texas put in place in 2013. She said, at that time, the fear was going to jail for not performing the job exactly within the strict restrictions. She said this law creates a whole new wave of fear.

“Are we going to be financially ruined? Am I not going to have a college fund for my kid because I'm fighting lawsuits? Are we going to lose our home?" Moayedia asked. "On the one hand, I think…it’s just money. I can handle that. But when you start to spiral and think about all the ways that they could unravel everything you’ve worked to achieve."

Despite that, Moayedi said her primary concern is caring for her patients, who are still seeking abortions. She was granted a temporary restraining order against Texas Right to Life and a list of anonymous other defendants. While she didn't have any scheduled clinic appointments for this week, all of the others going forward were canceled. She said, even before the law went into effect, people were having to seek appointments in other states.

"For the past few weeks, many Texans have been leaving the state because there are no appointments left," said Moayedi.

Moayedi also works in clinics in other states. She said one of them is already booked through September with women from Texas.

On Thursday, Graham touted the law as a victory for pro-life supporters around the country and said it's already saved hundreds of lives.

Moayedi said, as a doctor with experience in serving women, she knows the law will not stop the demand for abortion or the procedures themselves. It will simply create a divide for who can get them.

“The people that are most impacted are those with most number of oppressions," Moayedi said. “Women of color. Disabled people. Young people. Immigrants.”

She said the women that will suffer are the ones who don't have transportation, can't afford to fly to other states or who don't have jobs that allow for paid time off.

“It is such a struggle for the people I take care of just to make it to the two mandatory visits here in our state, right now," said Moayedi.

“More mental health issues. Less ability to care for their kids. More likely to lose their housing," Moayedi said. "It’s just layers upon layers of what will happen when people are denied that care."

While many pro-life leaders have argued that women who don't wish to be pregnant, even if impregnated during rape, should seek resources and support instead of terminating the pregnancy, Moayedi said the health implications of that can be dangerous.

“We see the same thing right now with vaccines and masks where people with a lot of experience and expertise give recommendations, and that’s countered with really pseudoscience," Moayedi said. "We're all exhausted."

She and other providers in the state have said they plan to comply with the law as long as it's in place, and they maintain focus on getting their patients to where they can get the procedure legally.