"When you see the initial explosion, you think that there's nothing left of the car," Peters said. 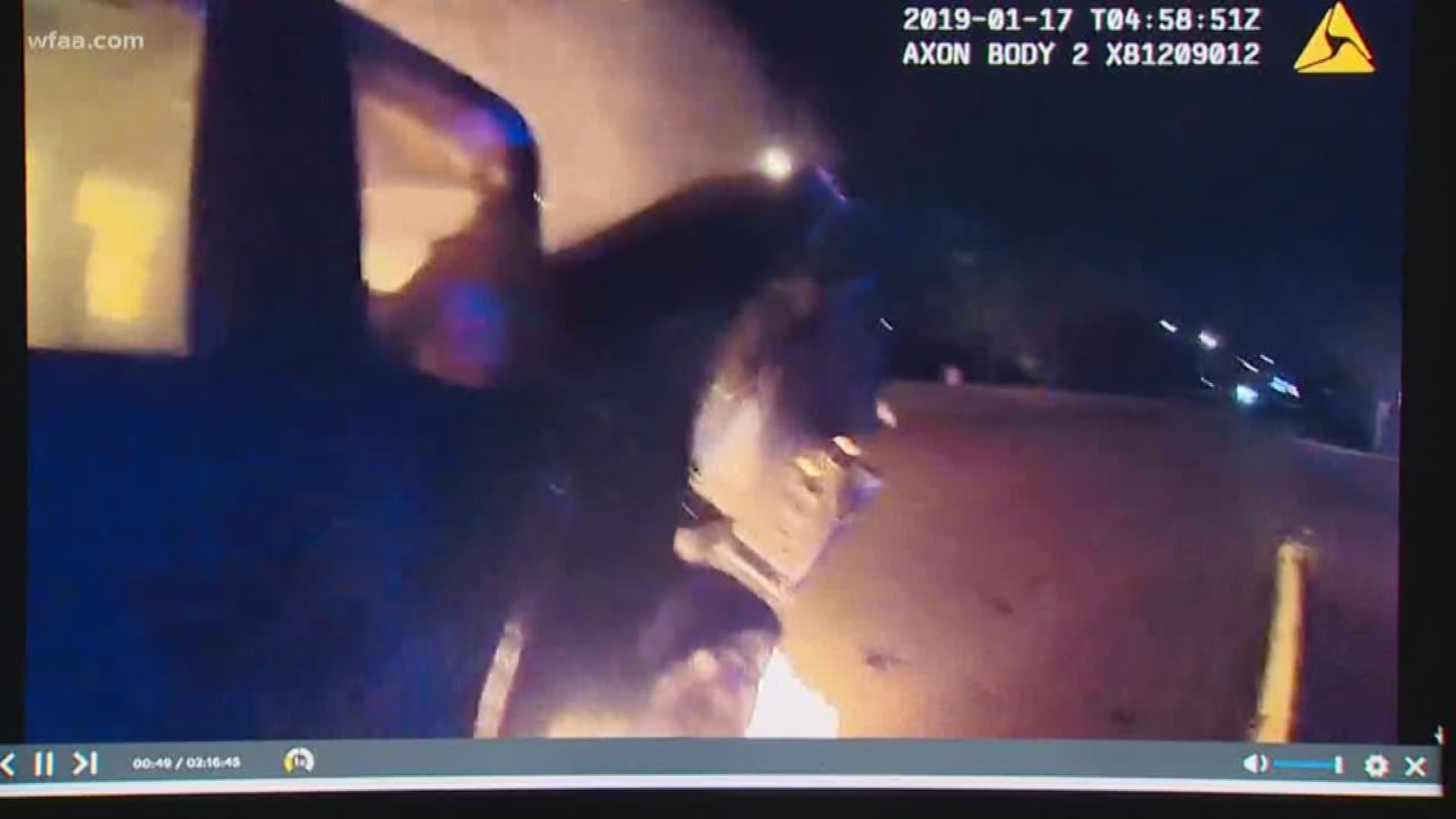 HALTOM CITY, Texas — The Haltom City Police Department released dramatic dash cam and body camera footage Thursday of the fiery collision and a daring rescue of a trapped driver from a late night crash caused by a suspected drunk driver.

Police officers began their pursuit of an erratic driver around 10:40 p.m. Wednesday. The male driver refused to pull over and led police on a high-speed chase. Haltom City Sgt. Eric Peters says officers eventually lost sight of the car near Watauga city limits and decided to return to Haltom City.

Then they spotted the vehicle again speeding southbound on Denton Highway. The pursuit, captured on a police dash cam, shows the car speed past the NE Loop 820/Denton Highway Bridge, where it rear-ended a Dodge pickup truck that had slowed to make a left turn. The pickup truck immediately burst into flames.

"When you see the initial explosion, you think that there's nothing left of the car," Peters said.

His car disabled by the high-speed collision, the suspected drunk driver was quickly apprehended by police. An innocent victim was trapped in her burning pickup truck. The burning fuel pouring into the sewer system causing smoke to billow from a nearby storm drain. And in three frantic minutes captured on at least two different police body cameras, officers struggled to break the driver's side window to reach the female driver. She had apparently been knocked out by the force of the collision and doesn't immediately respond to the officers.

"Hey can you hear me," a female officer yells. "I know, but this person is still moaning they're in there. Can you get out? There's a person in here," she yells at her fellow officers.

"Hey come on. Come on. Come on. I hear you. Get out! Get out," she yells. "Come on it's on fire. Come out. You're gonna burn up,” she screamed trying to get the driver’s attention.

As the truck continued to burn, even as other officers attacked the flames with fire extinguishers, the woman, screaming in pain, was finally pulled through the window that officers had finally been able to shatter.

"It's extremely dangerous because that vehicle could have exploded at any time," said Peters. "For them to be up there trying to pull somebody out, that's what we get paid for, but that's what we do."

As for the suspected drunk driver who caused the crash, he escaped with a bloodied face and a few broken bones and was led away in handcuffs. Both he and the other driver he hit were still in the hospital as of Thursday afternoon, both expected to recover from their injuries.

"He's in a lot more trouble now than he probably would have been if he just stopped and gotten his speeding ticket," said Peters. "It's just not worth it. I mean, obviously if something like this happens, it could be a lot worse than what it was. So it's just not worth it to run from the police."

It's a run that nearly cost an innocent driver her life.

Police have yet to publicly identify the suspected drunk driver. He is currently under guard at John Peter Smith Hospital in Fort Worth and will be booked into jail when he is finally released. Police have not indicated why the driver fled in the first place.